Samoa Joe trying to be different

With a legacy that includes names like Sting and Kurt Angle, it’s hard to say that TNA’s championship needs to be elevated. But that’s exactly what Samoa Joe wants to do.

“Every championship I’ve ever held,” he told SLAM! Wrestling, “I like to think I’ve helped bring it to a new level of prominence in the eyes of wrestling fans around the world. In that regard, the TNA title is no different.”

Which is in no way intended to disparage the significance of the TNA Championship — on the contrary, Joe wants it clear that being the title-holder is an accomplishment he’s tremendously proud of. 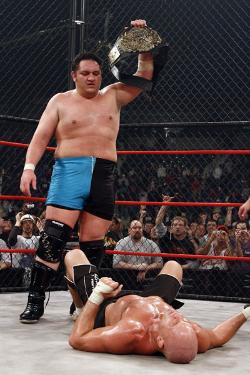 “It a great honour to be champion,” he affirmed. “It means that the company respects you enough to be the flag-bearer, the standard-bearer. What I want to do now is give the fans what they expect, and that’s the best matches I can possibly give them.

If he can continue delivering matches at the caliber of the one in which he won the belt, that shouldn’t be a problem. At April’s Lockdown pay-per-view, he and Kurt Angle put on one of the most unique matches seen on North American TV in years. Specifically, the match was heavily influenced by the sport of mixed martial arts. It was a style that both men wanted to showcase for TNA fans.

“I know it was something different,” he acknowledged. “But like everything else, the sport has to evolve. I think that what me and Kurt did in the ring in that match was a small progression into what the sport will probably be in the future. We went back to that catch-as-catch-can shoot style and (brought) it up to the modern stage, and I think we did a pretty good job of that.”

The MMA influence played heavily in the buildup for the match as well. In the weeks leading up to the event, the combatants were shown training in martial arts disciplines, and promotional videos featured UFC stars offering predictions of the outcome. All of this, Joe said, helped give the match a truly special feel.

“We wanted to give that big match feel that’s associated with the main event of any combat sports pay-per-view. The crossover — with Frank Trigg on commentary, who is an excellent analyst — I think everything all came together really well.”

But as groundbreaking as the match was, Joe is reluctant to commit to the same formula for all of his future title defenses.

And, despite being very proud of his match with Angle, Joe is absolutely satisfied staying true to professional wrestling — and more specifically, TNA Wrestling. Having just renewed his contract with TNA, Joe is looking forward to helping take the company into any direction it elects to go.

“I’m incredibly happy to be here,” he said definitively. “I want to be part of TNA Wrestling as it moves forward. With this championship run, I want to give the fans a great run. I hope the fans enjoy what I’ve done and continue to enjoy what I do in the future.”

Bob Kapur knows kung fu, judo, karate, tae kwon do, and several other foreign words. E-mail him some of your favourite lame jokes at [email protected]