Though Carl Engstrom, who died at the end of March, wrestled primarily in the 1950s, he was a key link in the successful brother duo of Randy Savage and Lanny Poffo in the ’80s. After all, it was Engstrom that trained their father, Angelo Poffo.

Engstrom and Poffo met at DePaul University in Chicago. Poffo was on the baseball team, but just wasn’t quite good enough to make it. “My hitting was bad. I was a catcher. My catching was good, and everything, but my hitting was bad. So I had to give it up. Carl Engstrom says ‘I can help you,'” recalled Poffo of his classmate in Physical Education. “I was in school with him at DePaul. He helped me a lot.” 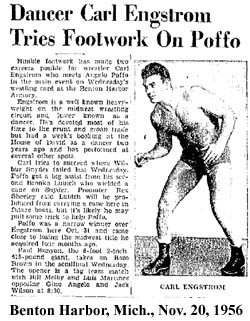 It wasn’t like Engstrom had been a pro wrestler for long, either. He turned pro just the year before, in 1948. But he’d had a successful amateur career, winning the Illinois YMCA wrestling championship at 191 pounds. He’d also competed as an amateur boxer.

Born January 26, 1924 in Öland, Sweden, Carl J. Engstrom came to the United States with his parents. He loved to entertain, and was a member of the Mignon and Martel Adagio Dance troupe for a year before he went into pro wrestling.

His wife of 53 years, Louise, can only shake her head at the twists and turns of their decades together.

“He had kind of a multi-career. He had been in show business, then he came up to the University [of Chicago], because we had an amateur showbiz group. We met. He thought he was going to do more show business, which he didn’t,” she said. “Then he did some professional wrestling. Then we got married. Then he went back to school, to DePaul, and he got his degree, and he taught in the Chicago public school system for 23 years. We also had a dancing school at the same time. It was busy! He was also wrestling at the same time.”

Engstrom’s wrestling career as a full-time profession really ran from 1948, where he was a championship Junior Heavyweight in Seattle, through to 1958, when he finally graduated from DePaul with an undergraduate degree, and started teaching phys ed. 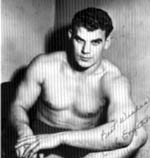 At the Engstrom School of Dance and Acrobatics in Oak Park, Illinois, Carl taught gymnastics. One of his pupils was the future “Leaping” Lanny Poffo, who studied gymnastics from the age of seven to 10, and ballet for six months — the only in either discipline.

“Carl was a total athlete. He was a boxer and a wrestler. He and Louise were also adagio dancers. He was a fantastic guy,” said Poffo in an email. “Many of my Leaping Lanny and Genius moves came about from the basics of gymnastics that Carl and Louise taught me.”

The publicity from the varied careers came easy, said Louise. A quick search through the archives unearths some gems:

Then there was this intriguing entry:

Sheboygan (Wis.) Press, Mar 12, 1951: “Carl Engstrom, the former Zuma of Mars, now wrestling under his own name.” Louise Engstrom explained: “When he first got introduced into wrestling, they put some sort of a stupid costume on him, and called him Zuma the Man from Mars. And he hated that.” (That was in Chicago.)

Engstrom wrestling career came to a close in 1973, and he retired from teaching a decade later. In 1994, Louise and Carl moved to Florida, but only stayed two years. It was during this stint that he was honored at the October 1996 Cauliflower Alley Club dinner in Tampa, Florida.

The last few years were tough, said Louise, as Carl had Alzheimer’s. “He wasn’t bad until the last two years, and he didn’t know, and that was good. That’s something you want to be the last to know if it happens to you, and he really didn’t know. And he was getting worse and worse,” she said. Hospitalized after a heart attack — which he couldn’t remember having — Engstrom died in his sleep on March 29, 2008. He was survived by his wife, Louise, and two daughters, Mary Kay Engstrom of New Jersey, Julie Ann Engstrom of Illinois.

“It was kind of a convoluted life, but that’s all it was,” said Louise. “We had a good life.”