Tennessee wrestling will no longer be the same without the late Sarah Eugene “Sara Lee” Miquet. She passed away on April 5 due to complications from Alzheimer’s disease.

“Most of you who knew of her at all remember her as the ticket lady in Music City for TNA, but she truly added much more to our industry. I had the pleasure of knowing and working with Sara during ’69 & ’70 while booking out of Gulas/Welch. What touches me most at this time is how this will affect her husband of 51 years and best friend, former pro grappler Corsica Joe. When you saw Sara, you saw Joe right up until my last contact with them at the Gulf Coast Reunion a couple of springs back. My heart felt condolences go out to Joe and their family.” 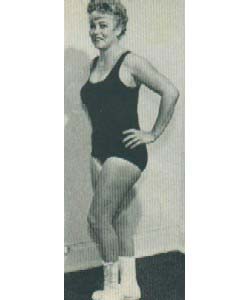 Lee was born on November 19, 1931 in the rural town of Gainesboro, Tennessee, and soon moved to Nashville as a child after her father passed away.

“My mother’s maiden name was Bessie Ray when she married my daddy, Martin Ray,” explained Lee in a 1996 interview with Scott Teal. “They were no relation, but I’m what you might call a double Ray. My daddy was a farmer and carpenter, but died when I was eight years old. I dropped out of Highland Heights Junior High School (Nashville) in the ninth grade, and started work at age fourteen as a waitress at the Tick-Tock Restaurant. I stayed for twelve years.”

While managing the same restaurant, she met Francois “Corsica Joe” Miquet who wrestled for promoters Nick Gulas and Roy Welch whose office was located nearby at the old Maxwell House Hotel. The two would later marry and remain inseparable both in and out of the ring.

Lee turned pro as the result of Nick Gulas being short a female for a mixed tag match. “After I met Joe, we’d go to the wrestling office,” recalled Lee. “I used to see Nick Gulas, and I’d joke with him saying, ‘When are you going to let me wrestle?’ He’d just laugh at me. This went on for several months. One day I was over there and said, ‘Nick, when are you gonna let me wrestle?’ He said, ‘Ahh, you don’t want to wrestle,’ or something like that. He came back in a few minutes and said, ‘You’re gonna wrestle tonight.’ He was short a girl for a mixed tag match. I had never been in the ring before, but that’s when I got started.”

Although a fixture in the Southeastern part of the United States, Lee wrestled throughout the world before retiring from in ring action in the 1970s; however, she remained an active part of the business often working the front door at the Nashville Fairgrounds for promoter Bert Prentice.

“Jerry Jarrett brought me to the Memphis territory in late ’89,” explained Prentice to SLAM! Wrestling. “I met Sara Lee then, and she was selling tickets at the Fairgrounds. I knew her just fleetingly. After Jarrett sold to [Jerry] Lawler, and then the whole Lawler, [Larry] Burton, USWA collapse; I took over the Fairgrounds. Her and Christine Jarrett were the first two people I hired.

“I was the last match Sara Lee ever had,” continued Prentice. “Back when it was Music City Wrestling, we did an angle where Sara Lee felt I needed some time off for vacation so she voted me off the board of directors — she was the deciding vote. So, I turned heel and we wrestled probably ten or twelve matches. The last time we wrestled was in Hopkinsville, Kentucky. Of course, I put her over in every match. It was fun and absolutely hilarious.”

While she was a sweet individual outside the ring, she was very rough and tumble inside the ring often working a stiff style.

“The Japanese promoters loved her,” explained Prentice. “She was the ladies champion in Japan. She did a few trips to Japan. She was a crowbar because Sara Lee would get in the ring and would forget the essence of the match. She’d beat the shit out of you. Jackie Moore and her are very similar. When they get in there and hear the excitement of the people screaming, they lose all oxygen to the brain and start wailing on you.

“The one thing I want to get across the most is that she was so fearlessly loyal,” added Prentice. “She could only see out of one eye. She was the person on my door. She could see somebody sneaking in the backdoor better than anyone. I called her my little pit bull. If she even sensed someone sneaking in the building, she was on it. It was amazing. Nothing went by her at that door and that was her charm. A lot of the fans were put off because she just stuck by the rules. I remember when the smoking ban hit where you couldn’t smoke in the building anymore. Oh my God, the people bitched and bitched. She took the brunt of that although it was just the law. She was just absolutely first class.”

SLAM! Wrestling also caught up with long-time promoter, Jerry Jarrett, to discuss his memories of his dear friend.

“I just saw Joe last Friday night,” said Jarrett one day after Lee’s passing. “He told me that Sara did not know him and had not spoken in weeks. My heart ached for him. We lost a good lady who loved and respected our business. Sarah and Joe were headliners in their time. Both were always classic professionals. They had a passion for the business then, and I was fortunate enough to work with both of them. In later years, their passion for our business continued. Sarah and Joe both worked for us at the Fairgrounds in various tasks. Sara would often travel with my mother [Christine Jarrett] to various towns. She was not only a loyal employee but a real friend to both me and my mother. It is rare that someone would have only fond memories of a person spanning 50 years.

“Sara was always the showman,” continued Jarrett. “In the early days of TNA, Sarah was the ticket lady with the broom at the Fairgrounds arena, and she was still the pro in everything she was asked to do. Some of the matches she was involved in are classic. I will miss this great lady.”

This reporter first met Mrs. Miquet in 2002 at the Nashville Fairgrounds during the weekly TNA pay-per-views. She was assisting Prentice at the ticket window, and true to form, she meticulously verified my credentials before I was allowed entrance. She was thrilled to be a part of the action during her role in the Dupp Cupp — she could wield a mean broom.

However, the last time I spoke with Lee was via telephone in 2005 for the article, Corsica Joe & Sara Lee: A love story. She shared her insight on a variety of topics that I wish to share.

Lee described the hard-fought battles she had with Cora Combs by saying, “Me and Cora worked hard together. We knocked the fool out of one another. Many times me and her both left the ring with blood coming out of our nose. We gave the people what they wanted.”

She also recalled how she acquired her fair share of bumps and bruises along the way, particularly during one match with Sherry Lee in the Bluegrass State by stating, “We were wrestling in Kentucky one time, and she held onto my legs when she went to high fly me. She buried my face into the mat. My nose hit the floor, and I had two of the blackest eyes you had ever seen. Blood just shot everywhere. That was in Paducah, Kentucky, I never will forget it.”

It goes without saying Sarah and Joe shared a unique love and admiration for one another that is very rare to find in today’s world, and it showed during our conversation. “He’s my big baby,” said an exuberant Lee. “We’ve had a good life together. We go everywhere together, and I still love him. He don’t know what he would do without me. ”

Scott Hudson best summed up Lee’s personality on the Mid-Southern circuit by writing: “We are all richer for having known her and poorer for having lost her. Rest in peace, dear Sarah.”