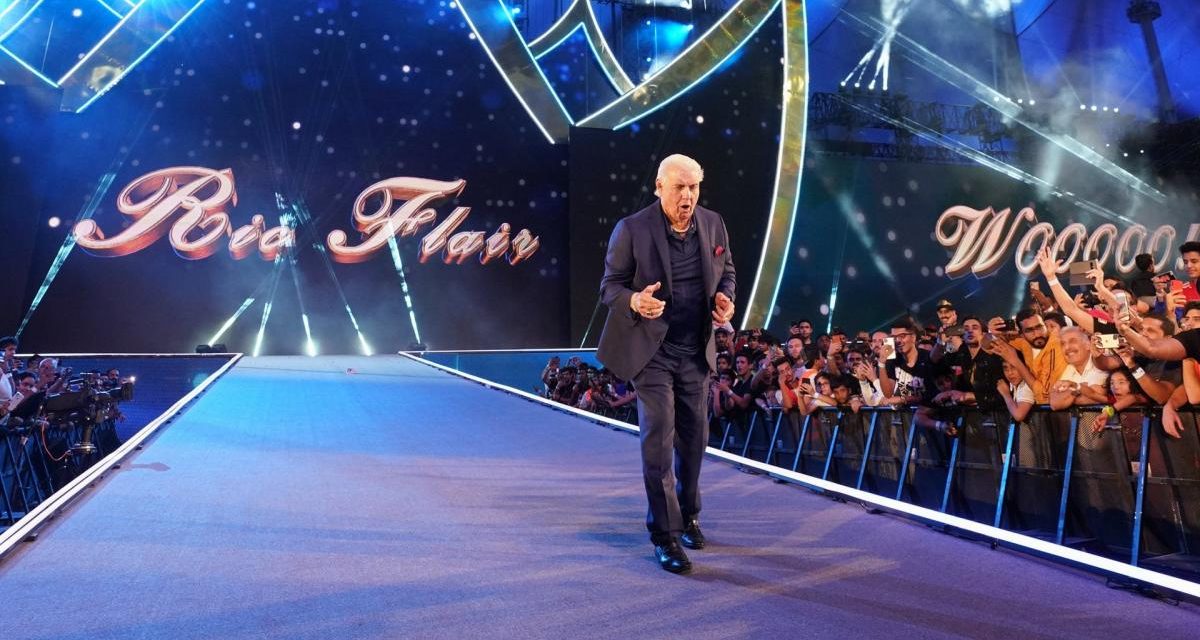 Whenever we ask our readers to give their thoughts on the hot topic of the day in wrestling, we’re always intrigued by the responses we get.

And this time we’re absolutely blown away. 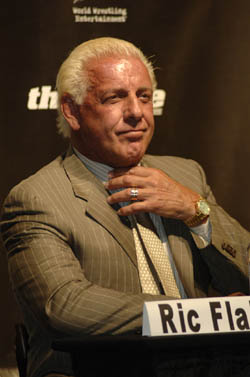 Ric Flair, stylin’ and profil’ while in Toronto for a press conference. Photo by Mike Mastrandrea

In the space of just a day and a half, the old mailbox was full of Ric Flair memories, which we will now share with you. So take a seat and get ready to share more memories of the jet-flyin’, limousine-ridin’, kiss-stealin’, wheelin’-and-dealin’ son of a gun, known the world over as ‘Naitch. Whoo!

Rossie Hanna
I grew up watching Championship Wrestling, with Big Bill Ward, out of Charlotte. And there was All-Star Wrestling, I think before Bob Caudle, out of our local Greenville station. In late 1973, I was sent by the Air Force to Thailand. In May 1974, I came home for a 30-day leave… this is when I first saw Ric Flair. Crockett Promotions had just released some of the wrestlers that had been around for years such as Rip Hawk, Swede Hansen and Johnny Weaver. (I understand Ric was partnered with Rip when he came into the area and after when the Swede had a heart attack… YouTube has a clip of Ric and Rip doing a promotion in 1974.) The area then became known as the Mid-Atlantic territory and included the Carolinas and Virginia. Anyway, I was impressed with Slick Ric. When I returned to my squadron in Thailand, I walked through the yard and warehouse yelling “WOOOOO!”. I remember my boss saying something about that “WOOOOO!”. It has been with me for 34 years… as I am still impressed with Ric Flair – The Man.

Marcel Beaudoin
For me, it isn’t so much a specific memory of Ric Flair. For me it is his work on the mic. There are very few wrestlers I have seen who are able to work the audience and crowd the way that Ric Flair does.

Craig Moore
One Ric Flair memory that stands out in my mind is the match he had with Randy Savage at WrestleMania VIII. The way he played up the heel role and took it to Savage’s knee to set up an inevitable figure-four was pretty amazing to a 10-year old. Sure, I was rooting for Savage, but Flair made sure that I would.

Jay Benedicto
My favorite Ric Flair moment was when he entered the Royal Rumble at number 1 and still managed to win it. For me, he is the epitome of a great wrestler as he does not really have a buff physique yet manages to win by using his wiles and pure wrestling skills.

James (from Ottawa)
Personally, one of my favourite moments regarding Flair is when he gave his final speech on Nitro. Knowing that WWE had invaded and obviously facing some embarrassment over this fact, Flair still came out and gave one of his passionate speeches on what NWA/WCW meant to wrestling and more specifically what it meant to him. He spoke of Sting and his monumental battles with him and always spoke from the heart. Nothing was ever rehearsed with Flair as you can clearly see from the emotion and tears welling from his eyes that night. Long live Flair pointing the middle finger at the corporate giant known as WWE.

Chuck Morris
At a house show in Tupelo, MS, Flair and Brian Knobbs came out before the show to work the crowd.The heel work he did was great and he even turned part of the crowd against him, and this was in 1999. Great stuff.

George Demick
My favorite Ric Flair moment was being first row for a match in Three Rivers Stadium in Pittsburgh, PA. The stadium had maybe a thousand people in it. It was empty. Flair defended the NWA title against Magnum TA for 55 minutes, half of which was in the rain. I got to pat Flair on the back and could actually hear him and Magnum joking with each other in the ring. It was great.

Jared from New Hampshire
For me the best Ric Flair moment that I will always remember was the first time I ever saw him on WWF/WWE TV. Here was a guy that I had never seen before in WWF/WWE before, and the only thing I knew about him was that he was always one of the top ranked wrestlers in wrestling mags. I had never seen the guy and I always wondered who he was and what was the big deal about him. I mean here was a guy that was always number 1 or number 2 in the wrestling ranking and I had never seen him anywhere. I was like who the hell is this guy? And of course the first time I saw him he had this big gold belt that I had never seen before and he was saying how he was the best in the business, and how he was the true champ, and how he was going to show everyone that he was the man. Years later you figure out that this guy is and will always be one of the greats in the ring, one of the greats on the mat, one of the greats on the mic, and one of the true good guys in and out of the ring. I find it amazing the he is nearly 60 and can still bring everyone in an arena to their feet, and there is no greater praise I can say then that.

Richard H.
I remember watching Ric Flair in the Quebec City Coliseum, in July ’86, against Rick Martel. This was the only time he came here. Still to this day, it was the greatest match I ever saw. Flair was at his prime, and so was Martel (who just lost the AWA World Title at the time). Kudos for the best ever…wooooooo!

Tim Najpaver
I too remember the dream date with Precious match when Flair went against Jimmy Garvin. What Marty Goldstein failed to mention was Flair beat Garvin and the next week went into one of his Space Mountain promos…talking about what he was going to do to Precious. Several times he even mentioned the word “rape” (unbelievable that got by the censors).
Well, Flair sees Precious from behind and goes after her. When Naitch grabs her she turns around and it is Ronnie Garvin dressed up like Precious. Garvin proceeds to punch and stomp all the amore out of Flair…which sets off a Garvin/Flair feud. I’ve seen thousands of promos watching wrestling since the late ’60s, but that segment I have never forgotten.