ORLANDO, Fla. – The Citrus Bowl will have to wait a few days. On Thursday night, the House of Blues at Downtown Disney was the site for WWE superstars to go head to head for the first time in Florida.

Video game maker THQ, the company behind the popular Smackdown vs. Raw line of games, played host to the sixth annual THQ Superstar Challenge, which featured a tournament between a number of male and female wrestlers. It also served as the finale to an international contest that saw four fans battle it out on stage for the right to walk away with a customized replica belt, tickets to the WWE Hall of Fame ceremony and front row seats to WrestleMania 24. 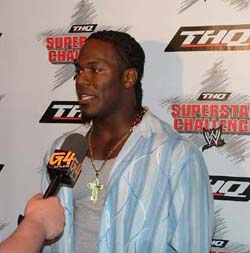 Elijah Burke is interviewed at the THQ Challenge. Photo by Nick Tylwalk

Darren Lavocah of Leicester, England, took the grand prize, defeating an American who seemed born to play a heel when he got the crowd to boo him by announcing that he was from “the real O-town,” Omaha, Nebraska. Hosts Todd Grisham and Matt Striker kept things moving along and proved to be surprisingly adept at keeping the crowd of WWE fans interested in what essentially boiled down to watching other people play video games.

While the preliminary action unfolded on stage, WWE talent ran a gauntlet of TV, internet and print media upstairs. Some seemed to be more enthusiastic with that duty than others, especially Elijah Burke — the winner of last year’s tournament — who was a hit in front of the cameras both in and out of character.

Many of the questions were gaming-related, but even the non-wrestling journalists wanted to get the wrestlers’ thought on Sunday’s show. Rey Mysterio seemed to be in good spirits despite having to sit out with an injury, and he summed up the motivation for everyone involved.

“You get amped up the whole year and get psyched up in your mind for WrestleMania — what’s going to happen storyline-wise and who you’re going to wrestle,” Mysterio said. “When WrestleMania comes, I want to be the show. I want to be the one that, when the ratings come out, the fans say, ‘Man, that WrestleMania was off the hook, but Rey Mysterio’s match, that was the best one of all.’ That’s what gives me the drive, the adrenaline, to go out an be a part of WrestleMania.”

WWE Champion Randy Orton also stopped and chatted, declaring himself “ready to go” for his three-way match with Triple H and John Cena. For the third-generation wrestler, the industry’s biggest night is all about carrying on tradition.

“My dad was in the first ‘Mania, which was in Madison Square Garden, and the 20th WrestleMania was in MSG, which was the first one I competed in,” Orton said. “He was actually in the back watching, so that was pretty cool.

“Hopefully I keep on going. To me that’s a big deal, to be able to carry on the legacy on my family.”

Naturally, a common topic of conversation was the bout between The Big Show and boxer Floyd “Money” Mayweather. Nearly everyone offered their opinion on the fight, with many choosing to side with their co-worker.

Even Mysterio, who said he felt like he should back the smaller guy because he “brought Mayweather in,” waffled when giving his prognostication.

“We know wrestling is predetermined to a certain point, and we know it’s sports entertainment,” Mysterio said, emphasizing his point with air quotes. “But when you get your nose broken, you definitely want at least a little bit of payback. So I honestly think it’s going to be a tough one. I hate to say it, but I think Mayweather might get knocked out… it’s 50-50.”

When it was tournament time, the fans were treated to a pretty entertaining display from the wrestlers, who seemed to be enjoying themselves. Crowd favorites C.M. Punk and Finlay gave it their all despite a professed lack of skills. Punk jokingly asked, “We’re playing Guitar Hero, right?” before he fell in the first round, and Carlito soaked in a warm response by quipping, “It looks like even after all the crap, I still have fans.”

Despite the machinations of Santino Marella and a host of other hijinks, Burke managed to make his way back to the finals, where he defeated relative newcomer Kofi Kingston to defend his title. He shed tears while getting his interview (“This was very vindicating, if you will. It seems that every year, there’s something different, something that stacks the odds against yours truly.”) but it wasn’t clear if they were from the joy of victory or the knowledge that unless he wins the 24-man battle royal, this was his WrestleMania moment.

But at least he had one, and as the fans on hand at the House of Blues would agree, that’s what counts.