Maria looking to make Wrestlemania 24 her own

It is the most wonderful time of the year, when a wrestling fan’s fancy turns to thoughts of the sights and sounds of Wrestlemania. WWE diva and current Playboy model Maria Kanellis touched down in Toronto recently and spoke to SLAM! Wrestling about a number of subjects including the reaction to her photo spread, her thoughts on Wrestlemania 24 and the Hall of Fame Induction ceremony.

Maria has had a nice run in the last year or so, emerging as one of the more popular members on the roster, along with Santino Marella. Nonetheless, the pressure is now on her and the Divas to deliver the goods, as an injured clavicle has sidelined her partner Candice Michelle. Ashley Massaro replaced her and now it’s currently Maria and Ashley against Melina Perez and Women’s Champion Beth Phoenix in the Playboy BunnyMania Lumberjack Match. 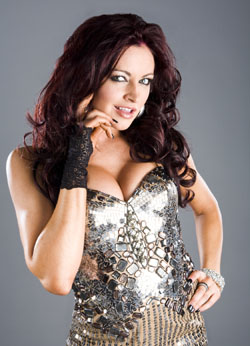 Pressure is nothing new to Maria of course. She’s too excited to feel pressured these days, with a successful launch of her Playboy cover issue now under her belt and all.

She’s been with the company since 2004 and has blossomed into a star, acquiring an impenetrable level of confidence that only comes with seasoning.

Now, it seems that the sky is the limit for the Chicago native.

Maria was approached previously about posing and turned them down, but after consulting with her family and her circle, she decided that this time she was ready, both personally and professionally. “Doing something like Playboy, you wonder what the reaction is going to be and it’s been bigger than I ever could have expected. My family was actually there; my grandmother, my mom, two cousins and my sister were all there for the cover reveal,” she said proudly.

The reaction has been overwhelmingly positive, from the locker room to the board room. “I know that WWE liked that it actually looked like a wrestling ring cover. It was the first time that it actually had wrestling on the cover and it made it feel more WWE,” she added.

Maria is looking forward to soaking up all the elements of the Wrestlemania weekend. “I’m just extremely excited; it’s going to be an incredible experience I’m sure,” she said.

She’s particularly looking forward to the Hall of Fame induction ceremony and the inductees, in particular Ric Flair.

“I’m very excited for this year. It’s always such a great thing. The Hall of Fame is so nostalgic and to see everybody up there, it’s just so inspiring and I’m sure there are going to be some tears shed this year.

“I’ve done so many interviews with Flair and he is so inspiring to everyone and I can only imagine the speech he will give,” she gushed. 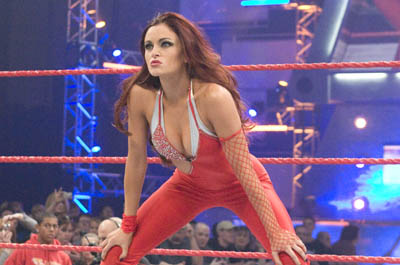 Maria is ready for action on Raw.

Asked to share a personal inductee memory, she went with the Nature Boy. “Well, Flair and I have had a make-out session that I will never forget. It was during Kiss-Cam, Flair came out and after I had given him a kiss, he took a bump, so I was part of the jet riding and limo car riding and Flair dancing and all of it,” she laughed.

And like the Nature Boy, who most likely will for the last time at Wrestlemania 24, Maria will walk down that aisle, looking to give the fans their moneys worth.

And to create some Wrestlemania memories.