BLASDELL, NY – The slogan for the city of Buffalo used to be “Talking Proud.” However, after Tuesday night’s fundraising dinner at Ilio DiPaolo’s Restaurant and Ringside Lounge, it’s also quite evident that the slogan “Talking Tough” applies as well.

Billed as a “Night With the Tough Guys!”, and loosely run as a roast of former Buffalo Sabres pounder Rob Ray, the sold-out, jam-packed evening in the Buffalo suburb provided a smorgasbord of fierce fighters for fans to feast on — and with. 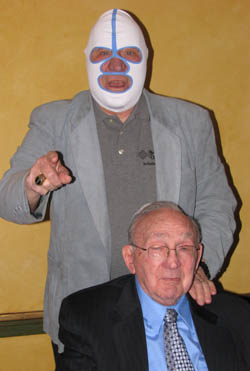 The Destroyer and Carmen Basilio. Photo by Greg Oliver

Former world boxing champ Carmen Basilio was there, cheekily picking pockets at age 82, and dishing out the occasional punch to those who did and didn’t buy his new book. Local contemporary boxer Joe Mesi was there as well, and explained his recent decision to get into politics — “I figured it was the only thing dirtier than the boxing business.” (Mesi got a slap from Basilio: “You’ve got no chin!”)

The Buffalo Bills were out in force, to say the least. Hall of Fame quarterback Jim Kelly arrived late, but made the biggest promise of the night — that the Bills would stay in Buffalo and not move, as expected, down the road. Steve Tasker, who used to block for Kelly and is now a broadcaster, was there, as were some members of the team’s medical and conditioning squads. Others included retired cornerback Booker Edgerson and current offensive lineman Brad Butler.

Various media were out to cover the event, as well as enjoy the tremendous spread of food. Bob Koshinski, former sportscaster and general manager of the Empire Sports Network, handled the MC duties.

From the wrestling world, the head table featured Dominic Denucci, up from Pittsburgh, Angelo “King Kong” Mosca, Billy Red Lyons and The Destroyer (Dick Beyer) who, yes, wore his mask throughout the evening. Also in attendance was Beyer’s son, Kurt, who briefly wrestled, and Clara Parisi, the widow of Tony Parisi, who recently sold the family’s restaurant and motel in Niagara Falls, Ontario. The Professional Wrestling Hall of Fame, well east along the I-90 in Amsterdam, NY, was represented by president Tony Vellano. The PWHF was sharing in the proceeds from the evening.

Given the location at the restaurant started by the late wrestling great Ilio DiPaolo, it’s no surprise that there were wrestlers up front. What was a surprise was how well they went over, cracking jokes and poking run at each other.

“My brother-in-law, the fellow that has that rag on his head down there, he asked me to go golfing with him last summer,” set up Lyons. “I said, ‘I don’t know. I’ll have to think about it.’ He said, ‘Nah, come on. I’ll give you a stroke.’ I said, ‘No thanks, I’ve already had one.'”

“It’s great to see these old faces … with new teeth,” said Mosca, with a late jab at Denucci, who spoke earlier. “Dominic Denucci has been taught English for 50 years and still can’t speak it”

Despite the humour all evening, there was a mutual respect at the head table.

“I was a Buffalo boy. I grew up at Kensington and Greyer. I was a little short, fat kid. Now, tonight, I’m on a dais with Bob Koshinski, Rob Ray, Steve Tasker …” started The Destroyer. “I feel so proud to be up here with these gentlemen, and I am very proud of what we are doing with the Ilio DiPaolo Scholarship Fund.”

“Razor” Rob Ray, who is involved with the hockey games on the MSG Network now, and has a show with Matt Barnaby have a show on Time Warner Channel 13, marked out a little for the wrestlers. “Billy Red Lyons and Angelo ‘King Kong’ Mosca, when I grew up back home, I used to see these guys on TV every day. This is my first opportunity to see them, which is something was pretty darn cool,” he said.

Praised for his heart and soul on the ice and charity work off it, Ray was the target of more than a few good one-liners, and even one PowerPoint presentation:

Thurman Thomas: “I could have scored more goals than Rob Ray [41 in 900 games], and I’ve probably kicked a lot more people’s butts too! I can tell you that right now.”

Angelo Mosca: “I finally meet that ugly Rob Ray. He’s got a face to stop an eight-day clock.”

The support and love for the DiPaolo family and the Ilio DiPaolo Scholarship Fund, which offers scholarship money to high school wrestlers, was very evident. “Anything I can do to help Dennis and his family and his scholarship foundation, he always knows that I’m right there for him,” said Thurman Thomas, who recently moved back to Buffalo — “I love Buffalo, I can’t explain it,” he said to a rousing round of applause.

Kelly and Denucci told tales of hanging out with Ilio DiPaolo.

Denucci recounted staying in the home of DiPaolo when he was relatively new to the United States. He was also around as DiPaolo started up his restaurant business. “It’s wonderful that the family, they continue what he started,” said Denucci, saying of his friend, “We had a lot of fun together. We didn’t make no money at that time, but we survived.”

“I remember many days, sitting in the back room with Ilio when he was here, talking about all the times that he used to fight, and all the guys — Bruno Sammartino, of course Dominic, and all the guys. I always knew that I would look and a guy like Ilio and want to be just like him,” said Kelly. “There’s role models out there, there’s people who give back to their communities.”

To conclude the evening, Dennis DiPaolo, one of Ilio’s two sons (and one daughter), took the microphone to thank everyone for coming, and to tell a tough guy tale about his father from when he was growing up, imitating his father’s rich Italian accent:

“Well, Dennis, I’ve got to ask you one thing. How many guys do you think you can take, you know, if you got jumped in a fight? I don’t know, I could take about 20, 25. Your younger brother, I know he can take about 10. Do you think you could handle three or four?”