EDMONTON – In the world of professional wrestling, promotions come and go. It truly is an accomplishment for any wrestling company to survive for any length of time, and achieving seven years is an impressive achievement. Edmonton’s Prairie Wrestling Alliance celebrated that landmark Sunday evening with a little help from their friends.

Fans lined up before the show and during intermission to meet the four wrestlers. Devine was witty and sarcastic as always, while Christopher Daniels is always a class act and showed it to fans meeting him for the first time. Not surprisingly, Sytch was a huge draw and took the time to take photos and chat with everyone. (And yes, she is still more beautiful than any picture could possibly do justice.) 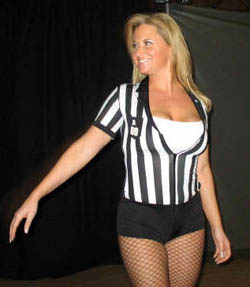 Tammy Sytch as a special referee in Edmonton. Photos by Jason Clevett

While the superstars certainly had their appeal, PWA has successfully developed their own stars and brand, and the homegrown talent truly took the opportunity to shine. While the night did have a number of blown moves, and ran on the long side at three and a half hours, everyone put forth everything they had and gave fans their money’s worth.

Sytch appeared as a referee for the scheduled bout of Belle Lovitz vs. Veronika Vice. Illness presented Lovitz from making the show, however Dusty Adonis, who recently lost a loser-leaves-PWA match, made his return. After boasting about his run as woman’s champion previously in Alberta, the match got the okay from Edmonton’s boxing and wrestling commission. The bout was highly entertaining, blending comedy with serious wrestling. In the end, Adonis’ mouth cost him the match — and the chance to return to PWA full time — by getting in Sytch’s face and being rolled up by Vice.

The PWA Mayhem title bout between Phoenix Taylor and Ravenous Randy, while for the most part a great match, featured one of the most terrifying moments I have witnessed in wrestling. The “Four Corners Ladder Match” started as a bullrope match, but once both men touched all four corners, the ladders came into play. The two fought their way through the crowd to the merchandise table, where Taylor lay Randy on a table and climbed the ladder to a basketball net in the NAIT gym. He took flight and crashed onto Randy, but the table did not break. As the crowd chanted “one more time” Taylor once again climbed up, this time scaling all the way to the top of the backboard — a legitimate 15 feet if not higher, and leaped. Again, the table did not break. Unfortunately, something in Taylor’s leg did and he ended up with a hairline fracture in his ankle that will take him out of action for up to three months, while Randy was coughing up blood. Both men made their way back to the ring and finished the match — an incredible display of determination for sure — however being both a fan and friend of the wrestlers, I found myself questioning if such a high risk move was really worth it in the end. Both men are so incredibly talented that they don’t need to perform stunts to get the crowd behind them. 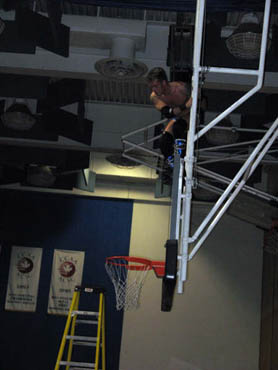 After a brief intermission, it was up to The Highlander and Christopher Daniels to get a concerned audience back into the show. They succeeded with a well paced, fun match that Daniels won with his trademark moonsault.

Sytch returned to the ring accompanying PWA champion Michael Avery for his match against Johnny Devine. Devine complained that Sytch’s wiggling would be a distraction and wanted her removed from ringside, but commissioner Kurt Sorochan refused. A group of fans, dubbed “the bleacher creatures” cracked everyone up by seemingly randomly cheering and booing before Devine and Avery had even locked up. It became apparent a moment later that they were cheering every time Sytch turned to face them, and booing when she turned away. Sytch was a distraction for Devine, who after disabling Avery, dragged Sytch into the ring and spanked her. After Devine got himself disqualified for hitting the champion with a kendo stick, revenge was had as Avery bent Devine over and Sytch smacked Devine with his own kendo stick.

PWA owner Kurt Sorochan made it clear how special it was to have achieved seven years. He spoke in the ring, thanking everyone from the wrestlers to the ring crew to his family — including his sons, which lead to him choking up (and a chant of “tender moment” from the bleacher creatures). It is evident that Sorochan has built PWA for the love of the business, as his passion for it came through loud and clear. That passion and desire that Sorochan and his team showed should ensure the PWA continues to celebrate many more anniversaries to come.

The next PWA show will be Saturday, April 5th.