Dark Rising is one of those hard films to pigeonhole. It’s a campy horror flick, ala Buffy The Vampire Slayer; it’s a skewed relationship comedy; and it’s a drama. But unmistakably it is one thing — the first starring vehicle for Jay Reso, better known to wrestling fans as Christian Cage. 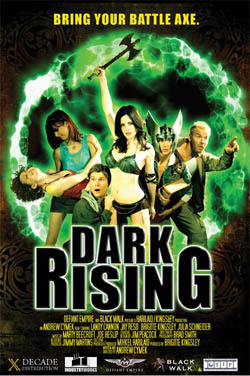 Well, Reso isn’t exactly the star of the show. He’s in the A.J. Styles role from The Christian Coalition, the goofy sidekick to the lead hunk Jason (Landy Cannon). Like Styles on Impact, Reso often zings off memorable lines with a goofy grin. He even gets a sex scene … with unpredictable results.

Brigitte Kingsley, who had many roles in the film, including producer and star butt-kicker Summer Vale, recently talked to SLAM! Wrestling about the film, and Reso’s contributions to it.

Reso’s character in Dark Rising, Ricky, isn’t that far from what fans are familiar with, she said. “It’s very similar to his character on TNA, actually — the crazy, goofy, meathead who tries to be tough and tries to be a hero, but at the end of the day, he’s got his downfalls, and he tends to be a little bit of a wuss,” Kingsley explained. “He’s a lot of fun. He’s definitely, by far, one of the funny elements of the project. He was hilarious in his character.”

The film is Reso’s second role on the big screen. He was a bit player in the Clive Owen movie Shoot ‘Em Up. Reso talked about Dark Rising recently with the wrestling media.

“It’s an independent film that I did, and a small, little campy horror movie. It’s the kind of movie that it is what it is. It was fun and funny and doesn’t pretend to be anything that it’s not,” Reso said.

On the day the movie had its premiere in Toronto, Reso was on The Fight Network Radio with host Mauro Ranallo talking about his experiences on set. “I think everything was kind of magical about this movie. From the casting to the way the cast gelled to the way the director put the film together. There was something about this movie right from the start and we all had a blast doing it and I am really proud of it. Like I said it’s just one of those movies, you go in there and it is what it is. You go in there and it’s a fun movie and everyone will laugh and I think will enjoy it.”

Released on DVD on October 30th to coincide with TNA’s Best of Christian Cage DVD, Dark Rising started production a little more than a year ago and was shot around Toronto. Kingsley described it as a “action/comedy/thriller”, written and directed by her partner at the Defiant Empire film company, Andrew Cymek.

Reso was on the company’s mind all along, said Kingsley. He was suggested by Scott D’Amore, the Godfather of Canadian wrestling, who has helped countless grapplers get breaks into the squared circle.

“When we decided to do this project, Andrew gave him a call and said, ‘Hey, I can actually write you a character, something that would be in your line of work, and that would be fun for you to play.’ Jay was really excited about it. He’s been wanting to do the switch — well, maybe not the switch — but include acting in his life. We wrote the character of Ricky for him,” Kingsley said. “When he read it, he fell in love with it, and decided to come on board. He’d fly back and forth from Florida every week to do his scenes. He was really great. He was fantastic with the schedule, and making time for us.”

Reso was thankful of the lighter schedule with TNA to make it all possible. “That’s the great thing about being in TNA, I’m allowed to explore these other options. Before, I didn’t really have the time to do those things. It’s been a lot of fun. I’m looking forward to doing more of it for sure.”

Kingsley does think that Reso has a future in film, and not just in a potential Dark Rising 2, or a Dark Rising television series. “I think this project is an amazing showcase for him. It really shows that he has acting chops and he could carry a script. I think that people don’t necessarily think of wrestlers as actors, but they really do act every day of their lives. When we were on set the first day, we were amazed at how quick he picked up on the character, and how his comic timing was just impeccable.”