Despite being on Day 22 of a lengthy book and media tour, Chris Jericho sounds pretty happy on the phone. Reached in Seattle prior to a signing appearance, when asked if he was tired of the media interviews yet, he responded “No, not at all, man. As long as people want to talk about my book I am happy to do it.”

And talk about his book he has been. A Lion’s Tale: Around The World in Spandex has debuted at #22 on The New York Times bestseller list in part due to the massive push by Grand Central Publishing and multiple interviews by Jericho himself. Without the WWE marketing machine behind the book, this ranking is a tremendous feat. 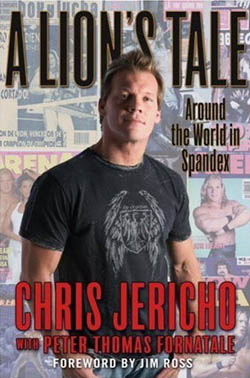 Unlike many wrestling books. Jericho’s story only covers his climb to the WWE — a trip that took him to Mexico, Japan, Germany, ECW, and WCW. It ends moments before his WWF debut, a verbal joust with The Rock.

“I didn’t want to try and cram my entire career into the book. I thought there was a very interesting story of all of these places I went to internationally and originally I just wanted to write the book on that. My life is an interesting story not just as a wrestling book but as a life book, about a guy having a dream and his journey to get there. I didn’t want to do anything on WCW initially, I actually just wanted to do the book on my time in Mexico as I thought that was really interesting. But then we expanded it to include my time in Japan and Germany and stop at right when I got to WCW. But then I realized that the whole story of the book was that I wanted to be in the WWE, that was my dream. That is what the natural progression of the story was, start in small-time Canada, tour around the world and in the end end up in the WWE. The story can continue on from the end of the book but that is the end of the story at that point, the whole process and seeing what it was.”

Many are comparing Jericho’s book to Mick Foley’s Have A Nice Day. Foley assisted Jericho in the editing process and was a huge influence on the book. Jericho takes the comparison as a compliment.

“Mick’s book was the template for what you want a wrestling book to be like. I didn’t want to copy his book or anything like that, but we both had an interesting, unique journey and story to tell. Mick’s first book took him up to where he was at that time. The one ace in the hole I have for the sequel is I don’t have to start from now, 1999 is eight years ago so I have all of those experiences. I didn’t write this book for a wrestling crowd, I wrote it for everybody, about one person’s journey. It is a story about how many dreams you can make come true.”

Also out now is Bret Hart’s book, which is also similar to Jericho’s in terms of the route each man took to the WWF.”I haven’t read Bret’s book yet. I am reading Nikki Syxx’s book right now and then Bret’s book is next. I think our books are the last two books of its kind about guys coming into the business the way we did, going all these different places before we even got to the ‘big time.’ It’s just not that way anymore and isn’t going to be that way and people should enjoy the fact that these books came out at the same time because they could be the last ones of this kind.”

Another similarity is that Jericho’s book was written entirely by him, just like Foley’s and Hart’s.

“With WWE books, a lot of them aren’t written by the guys themselves. Mine sounds like me because it is me 100%. I worked with a collaborator (Peter Thomas Fornatale) but that was more for structure, editing, and as a sounding board. I knew I wanted to write this book myself I just wasn’t completely sure how to do it. I think that is part of the problem with WWE books, that the guys aren’t writing them. I couldn’t leave my life story up to somebody else when a) I know how to write, b) I like to write, and c) I lived the damn thing so who else is going to know the nuances of what I went through other than me? It’s an independent release from the WWE but the publishing company is one of the biggest book companies in the world. The books coming out at the same time from this company as mine are Stephen Colbert’s and Rosie O’Donnell’s. It was hard to tie in to what they want because I am not sure they understood what they had. My editor understood and then she got the publishing house to put its muscle behind it. My book beat Batista’s book on The New York Times bestseller list because the story was genuine, people liked it, and the company really knew how to get the book out there and make people understand that it isn’t just a wrestling book.”

A large theme in the book is that of lost brothers. Jericho candidly speaks of the deaths of Art Barr and Owen Hart, and Eddie Guerrero and Chris Benoit are major influences in the book. Jericho had completed and submitted the manuscript weeks before Benoit killed his wife and child and then himself. After much soul searching, Jericho kept the book the same, and added on a foreword.”I finished my book in May and the stuff with Chris Benoit didn’t happen until June. As a result of that I went back through the book and wrote the foreword because I didn’t want people who were reading the book to not understand why I was speaking so positively about Chris. So I addressed it right off the bat in the foreword and got that out of the way and allowed people to enjoy the book as it was meant to be, an inspirational and comedic book, without a black cloud hanging over it. As for Eddy, it was hard, his death, but as I look back I am just thankful that I was able to know a guy who was as cool and heartfelt and sincere as he was. He was inspirational. I dedicated the book to Eddy because he is a guy that inspired me a lot. He was a guy who really lost it all and gained it all back. It’s a very interesting story, his. The really difficult one to write about was Art Barr because he was the first guy I knew that passed away. He was the first one that was a close friend that I had to deal with his passing. On that level, going back to those times and delve into that was tough. But in writing the story of my life, I wanted to be honest and go through everything as it happened. I didn’t have an agenda or want to try and stay away from anything. I wanted to tell the stories that I remember and that were relevant to the book and that was one of the major ones for me.”

Now that A Lion’s Tale is a bestseller and has developed a large following, the obvious next step would be a sequel covering the six years in the WWE and three years since leaving to focus on acting, his band Fozzy, and his appearance on Celebrity Duets. While a sequel is likely, don’t look for it on bookshelves any time soon.

“Now that the book is on The New York Times bestseller list and doing very well I think there is a lot of interest from the publishing company and people who have read the book to do another one. I can literally pick up the story literally seconds after the first one ended so absolutely there will be a sequel at some point. This book took two years to write so I would say anytime within the next two years we will be having our next interview.”Part of the appeal of doing a book tour is the face-to-face interaction with fans. Whether they are e-mailing him through his website, telling him at signings, or during interviews with media, the general consensus is that A Lion’s Tale is a great book.

“All across the board it has been great. I get a lot of feedback from people who take the train to work and have had people give them funny looks because they burst out laughing while reading. That is great because comedy is very hard to write to begin with, but to write it where people laugh at situations it is nice to know it is working,” Jericho said, adding even fellow wrestlers love the book. “I sent the book to a couple of my friends. The funny thing about the wrestling business is when you leave your contact list kind of goes down. Everyone that has read it that is in the business seems to really enjoy it, to the point of people commenting that they were sad when it ended. I think that anybody that actually lived their dream should like this book. Even if you haven’t I think you will enjoy it because the good guy ends up winning in the end.”

Look for Part 2 of our Chris Jericho interview later this week with comments on Nancy Grace, the third generation of the Hart Family, returning to wrestling and much more.