As the leader of the Christian Coalition in TNA, Christian Cage sounds a little like a proud papa. His two stablemates, A.J. Styles and Tomko, have really come into their own recently, and he’s been a big part of their development.

And, after nearly two years in TNA, Cage seems to have hit his stride as well. A two-time World champion in the company, he’s well established as a main event performer and, just a week ago, stole the show at the flagship Bound For Glory pay per view in Atlanta with an emotional bout against Samoa Joe. The loss ended Cage’s no-pin, no-submission streak that had been going since he arrived in town. 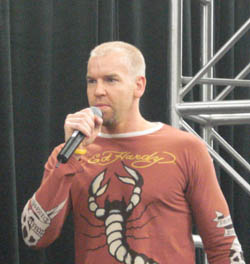 Christian Cage addresses the audience at the Bound For Glory fan fest. Photo by Bob Kapur.

To say he is still pumped about being in TNA would be an understatement. “One of the things that excited me about coming here was the fact that it was a growing company. It seems to be growing every day, every month, every year since I’ve been here. It’s exciting to be a part of something that’s growing,” he told the media last week in a conference call. “It’s still exciting because of all the things that are happening and the way that it’s growing and the forward momentum the company has.”

Somewhat stifled during his last months in the WWE, when he seemingly hit the glass ceiling, Cage has found TNA to be refreshing and open to ideas.

“They allow me to be real hands-on with everything, as far as promos go, backstage vignettes, that sort of thing. With creative direction, everyone’s open and everyone’s open for discussion of certain things. It makes it easier when you don’t have to be scared to speak up,” he said.

Two of the beneficiaries of the creative freedom have been Styles and Tomko.

Long considered one of the finest in-ring performers of his generation, Styles, a three-time World champion, has transitioned into a cocky — and often hysterical — heel. His segments can often be the highlight of an edition of Impact.

Cage sees a similarity between what he and his long-time friend and partner Edge went through in the WWF. They had each other to play off of as they started getting time on TV away from the ring, and that helped them get at ease quickly. Shucking his aw-shucks babyface veneer, Styles has found a comfort level with Cage and Tomko, backstage, on promos, and in the ring, where he and Tomko currently reign as TNA’s tag team champions.

“Maybe he feels comfortable when he’s with me,” considered Cage on Styles. “We just kind of goof around sometimes backstage, and those things sometimes come out on TV. When that happens, you start to feel more comfortable and more confident doing things. Maybe it’s a side of himself that he didn’t know he had, but he’s taken the ball and run with it.

“In the ring, he’s second to none. He’s an unbelievably talented performer in the ring. He can talk, and he does have a great personality. It’s even going to evolve from here and move up. I think the sky’s the limit now, especially now that he’s tapped into this side of his persona. I think he’s going to be a huge star.”

Few would have said the same of Tyson Tomko when he arrived in TNA, in the same lackey role he performed in the WWE for Cage. But today Tomko is arguably among the most improved wrestlers on the roster.

“I’ll take all the credit for it. It was all because of me,” joked Cage. “The thing that people don’t realize about Tomko is that he’s a real student of the game. In the WWE he didn’t get a real chance to perform all that much.”

When they worked together in WWE, Cage said that Tomko would study his matches and they’d talk about them backstage. “Even if he wasn’t in the matches, he kind of learned from the matches. That’s what I always respected about him.”

After parting ways with WWE, Tomko went to Japan, where he and Giant Bernard (A-Train) currently are New Japan IWGP tag team champions. “When he went to Japan and came back, he was a completely different person, a completely different performer. I opened the door for him a little bit in TNA, but he kicked it open and ran with. What you see is what you get, he’s going to be a top performer for sure. He’s got all the tools and he’s even got the right attitude. I’m really, really proud of him. I’m happy for him.”

Cage is equally proud of his series of bouts with Samoa Joe. It’s an odd pairing of conflicting styles, he admits, but it works. The chemistry is there, the same as Cage used to have with the likes of Shelton Benjamin, Chris Jericho, Rhino, or the Dudley Boys (now Team 3-D).

“You stumble upon it, that chemistry. You can’t explain it, but it’s there. It’s the same way with him,” said Cage. “I think at some point, maybe it’s because our styles contrast each other so much that I’m a little more acting up in defense and he’s a straight-ahead, come-forward kind of guy. That contrast of those styles meshes really well. I think that’s probably what it is, that both of our attitudes and what we bring to the table, it gels. Whenever we go out there, something good happens.”

The Bound For Glory Joe-Cage match was a barnburner. Cage called it a “straight-up, straight-forward, kick-ass wrestling match” that was propelled even higher by the hot Atlanta crowd. “My intention, every time I go out there, is to steal the show, no matter what it is. I want to be the guy that people remember. Whether they do or not, I don’t know. But that’s my intention every time I’m on the screen — I go out to the ring and I want to be that guy.”

Down the road, Cage sees TNA continuing to grow, and becoming comfortable with the two-hour timeslot on Spike TV. “It’s a big step for everybody and it’s going to be an adjustment for everyone for a little while. I think once we get past the initial adjustment stage, I think you’ll see a smoother show, definitely,” he said. I think the shows have been good and I think they’ll continue to get better as we keep moving along.”

The rating has been consistently around 1.0, and Cage truly believes it will improve down the road. “The key is to throw so much stuff at the wall that more sticks than doesn’t. So that’s where we’ve got to get to, we have to get to that point where we find our groove again in that groove. I think we’re still trying to find it exactly. We’re getting there.”