With less than a day to go before participating in the first ever TNA Women’s Championship match, Gail Kim and Christy Hemme couldn’t have been more excited. SLAM! Wrestling sat down with the women at the Bound For Glory fan fest to get their thoughts about the company’s newest division.

“Ohmygosh,” bubbled Gail, “I can’t even describe how excited all the girls are about the Women’s division. We’re really trying to be the alternative and bring back women’s wrestling.” 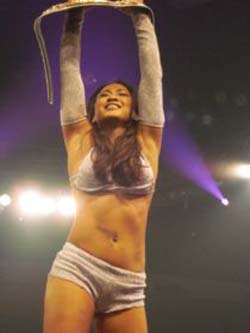 To help do that, the company has signed a number of new faces, supplementing the roster which previously consisted of Kim, Hemme, Traci Brooks, Jackie Moore and the relative newcomer Roxxi Laveaux. Many of the women debuted at the pay-per-view in the 10-women gauntlet match, which Kim ultimately won to capture the gold.

“All of them are so talented,” Kim said about the ladies. “They all have a different look, they all have something unique to offer. It’s great because there are a lot of new and fresh matches we can have that people have never seen before. (With the new girls) we promise the fans are going to get some amazing entertaining matches.”

Hemme echoed those sentiments, reinforcing the caliber of the talent of the newcomers. All of the additions have impressive wrestling credentials, unlike in the WWE where the Divas often have little or no in-ring experience. If there is an authority on that matter, it’s Hemme, a former WWE’s Diva Search contest winner who was thrust into matches before she felt she was ready.

“They threw me in the ring without having any real training. Here, they’ve been really good at making sure nobody gets into the ring unless they’re really ready. I’ve taken the past couple of years to really develop. I’ve trained in Canada, Mexico, Los Angeles. I’ve done what I can to be ready because I really want to be in the ring.” 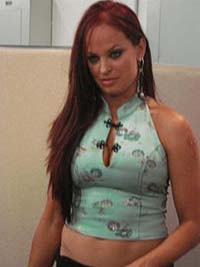 Fortunately for her, with their weekly show expanding to two hours, she should be able to get more of an opportunity for that to happen. That additional TV time was very helpful in the introduction of the Knockouts division.

“I’ve been waiting for this day for going on three years,” said Kim. “Ever since I started with this company. We all have been pushing for this. (Management) pretty much told us that once we got two hours, we’d have a women’s division. We didn’t know if it was true or not, but they definitely kept their word and we’re so happy.”

Hemme, too, gives a lot of credit to the company, and in particular TNA President Dixie Carter, for living up to that word. “Having a woman President has made it night and day compared to WWE. (Dixie) really protects the girls and looks out for us. Everybody feels safe and respected, and it’s made it a great environment.”

Added Kim, “Absolutely, (Carter) has been so instrumental in making this happen. For it to kick off on the company’s biggest pay-per-view of the year, it’s like a dream come true.”