A few weeks ago, I had the pleasure of wrestling in Ottawa, Ontario at the Civic Centre for the Super Ex Showdown. The show itself had a few snags — mainly that Bret Hart was to appear and sign autographs, but due to a tornado or some such in the Chicago area was unable to make his connecting flight. A few people have asked, “Well, why wasn’t he on an earlier flight or in the day before?” The reason is because Bret was in Florida for his friend Brian Adams’ funeral that day and that flight was the only one available. Anyone who can find fault in that should seek help. 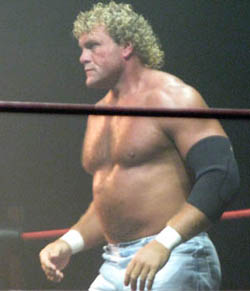 The show itself was quite well run from a backstage standpoint and the setup was top notch. With names like Christian Cage, Jeff Jarrett, A.J. Styles, Pierre Carl Ouellet, Greg Valentine, Koko B. Ware, Kamala and Lanny Poffo, the fans in Ottawa really were spoiled. It’s rare to see an independent show that goes to such lengths and all the thanks can go to Devon “Hannibal” Nicholson for putting this great show on. But the main purpose of my writing this is not to rehash the show which you can, of course, order here.

No, I want to talk about just one man.

My opponent for the evening was none other than “Psycho” Sid Vicious. Having been (mostly) out of the wrestling business for six years due to a terrible leg injury suffered in WCW when he jumped off the second rope and broke his leg horribly, I was expecting to see a guy who looked like he had taken some time off. Boy was I wrong. Sid came in in near perfect shape. At 6-foot-10 and 305 pounds, I was astounded at his physical presence. I mean, I know I am no superhuman nor overlarge by any means. But Sid almost made me feel like a child. Good thing I am a good cheater.

In truth I really was amazed at how well he has recovered and taken care of himself. I assure you it won’t be long before you see him again on either WWE or TNA programming as he still has a magnetism that is incredible. The crowd at the Super Ex show went bananas for him. I mean his pop was good, not quite as good as mine, but close. Heh. I was really happy with the reactions we got for that match and was happy I could body slam his gigantic butt. I am stronger than I look. But alas I did come up short. Pun intended. For any fans of Sid out there I definitely recommend picking up the DVD of the show.

The next night I got to work in Cornwall for Canadian Grand Prix Wrestling against a student of mine, Josh Alexander, aka Jay Fenix. The GCPW show was quite good and had another great mix of talent with Valentine, Koko and Kamala making their way there as well as the Stampede crew of Randy Myers, Tiger Raj Singh and the Great Gama Jr., who are all must-watch talents. And my favorite Stampede ref, J Edgar Hooper, whom I have been up and down the road with and love to work with any time. Hoop’s one of the true stand-up guys I have met in this business and I look forward to seeing him again soon. He’s a guy who really should have a job in WWE or TNA as he’s the best ref I have ever worked with.

Anyways back to my point. Josh and I have never had the pleasure of locking up in front of a crowd and we were both excited to take each other to the limit in a straight-up wrestling match, no gimmicks, no good guy/bad guy, just a catch as catch can clinic, if you will. I am very proud of Josh, he has come a REALLY long way from when I first met him a little over a year ago. Hold for hold, move for move, he held his own and more. I was devastated and proud all at once when his chops were WAY better than mine. In fact I was jealous. So I almost blasted his head off with forearms. Good thing he’s a tough kid. I hope any indy fans reading this definitely go out of their way to see this kid work as he has all the tools to go really far. And it won’t be long before you won’t be able to drive to a local show and see him perform.

In the meantime and in-between time, that’s it. Another edition of Devine Intervention.