Bill Mercer takes the reader behind the microphone

The world of radio and television programming is a part of the day-to-day entertainment for millions of North Americans. Professional wrestling has been on the cutting edge of these forms of media during the last century, and in large part helped popularize them. However, what was the path that pro-wrestling took — and for that matter all sport — to develop the passionate national following it enjoys today? 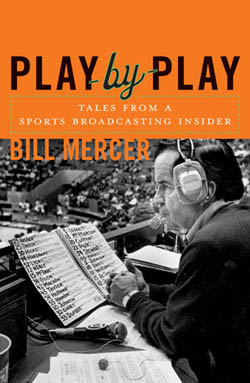 To find out the answers to broadcasting’s past it is best to go to someone who experienced the sports industry first hand. This is where Bill Mercer and his new book, Play-by-Play: Tales from a Sportscasting Insider, come in. Mr. Mercer is a sports broadcasting veteran of over 60 years — including his time at ringside — and has finally put down on paper his stories of a business that has evolved greatly during the past decades.

Having commentated baseball, football, basketball, and wrestling on a variety of levels from across the United States, Mercer found remembering specific details an initial challenge. “I was surprised when I could bring back so much information,” Mercer told SLAM! Wrestling. “Then I contacted some old friends who remembered some details. Discovering that the Internet has every detail from past games was also exciting.”

Mercer, who has taught sports broadcasting at the University of North Texas for the past 30 years, also includes valuable tips and tricks for upcoming sportscasters throughout his book. This makes Play-by-Play a seamless blend of textbook, personal memories, and history all wrapped up into one easy and enjoyable read.

The World War II veteran takes the reader through the rigorous day-to-day game preparation as a commentator, as well as how tough the travel schedule is.

“There were many occasions where due to a delayed flight or car troubles I arrived to the stadium moments before kickoff. Things can get quite chaotic. To be properly prepared you should be arriving at least two hours prior to the start to set up,” explained Mercer.

The former Dallas Cowboys play-by-play broadcaster started his radio career in 1950 and by 1951 was called upon to commentate pro wrestling for his station. “I didn’t plan on being a wrestling announcer, but the radio station management at KMUS in Muskogee, Oklahoma said it came with the sports broadcasting package. This was my first big job as a sportscaster, so why not?”

Mercer did not know much, if anything, about wrestling, but was given a chance to learn by some of the local promoters in Oklahoma. “I was told I’d be given Wrestling 101! The wrestlers who went over the basics for me were: Danny McShain, Wild Red Berry, and the Fabulous Moolah, the woman wrestler champion. They demonstrated the hammerlock, full and half Nelsons, head locks, plus a few of their own inventions.

“They used me as a guinea pig, laughingly putting enough pressure that I understood the significance of each hold. I had no idea about the preplanning of the evening’s various matches. I wasn’t aware that the winner and loser were preplanned.”

The 82-year-old even provides an interesting timeline of wrestling’s history on radio and television, along with a summary of the inner workings of the NWA. Dating all the way back to 1922, pro wrestling became popular on the airwaves during the 1930s across the United States, and enjoyed another boom period due to TV’s mainstream appeal in the 1950s.

Mercer broadcast for a variety of promotions as part of his sports duties, but hit it big when he was called upon to announce for the famous World Class Championship Wrestling (WCCW). Now employed by Channel 39 in Dallas, Texas, he had the opportunity to work with the Von Erich family and is still recognized by fans in the area some twenty-plus years after calling his last match.”I finished up with World Class around 1985 … so many good guys, David Von Erich was special to me … he was smart, had charisma, and was a super person … In fact I have fond memories of all of them … but the bad guys were the most fun!”

Mercer also shows a tremendous respect for the industry. 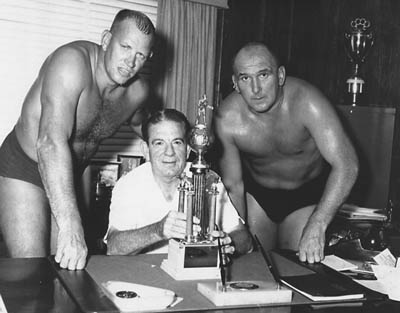 “It is not fair, I believe, to use the word ‘fake’ because I have seen a tremendous amount of reality, both in their athletic ability and lack of concern for personal injury.”

Along with his on-air partner Gary Hart, Mercer attempted to revive WCCW in the early 1990s. He had most of the pieces in place, even a commitment from Kerry Von Erich, however, the team could not secure a television deal and the idea quickly died.

When SLAM! Wrestling asked if he keeps an eye on the current sports entertainment product, Mercer said that he longed for the good old days.

“I do not watch the current version of professional wrestling. It seems more like computer-generated movie violence now. When a wrestling fan recognizes me, nearly 100 per cent say they don’t watch the shows today because of the violence, sex and whatever else.”

Having undergone triple bypass heart surgery on Valentine’s Day in 2003 and still broadcasting minor league baseball in Texas, Mercer was modest when answering on how he would like to be remembered.

“Just as a competent broadcaster who sort of succeeded. Also, that you can have a great life in this business without going national, though I did have a little time on the networks.”

Mercer also gives this advice to newer sportscasters on how to make it in the industry.”I guess what younger people should take from this book is that it takes some talent, luck, and people helping you to make it in this business. Plus, try to think things through better than I did at times!”

Mercer was talked into writing this 298-page book by Taylor Trade Publishing, following the success of his first publication, When the News Went Live, which details the work the TV reporters did in 1963 when President Kennedy was shot in Dallas. Even if the reader is not a fan of the particular teams or sports that Mercer covered over the decades, the stories are so captivating that you will feel like you are sitting right beside the play-by-play broadcaster calling the action. “I hope that the readers will find enjoyable stories and get an understanding of how this business works.”

He follows up those comments with some final thoughts on his illustrious career.

“We are all beholden to radio and TV station operations, businesses, the ball clubs we work for or with, and a myriad of other responsibilities. Yet, I would go back and do it all again.”