Family can come in handy when trying to book headline guests for a big wrestling convention. Especially when booking a former governor.

For Jason Blaustein, who is running a huge event on Long Island, this Friday and Saturday at Sportime in Lynbrook, New York, the connection was his cousin, who was more than a little familiar with Jesse “The Body” Ventura.

The Body (or The Mind as he likes being called since serving as governor of Minnesota) is making a rare autograph signing appearance, taking in both days at the show.

Booking him went smoothly, said Blaustein. “It wasn’t that difficult, really, because my cousin, Barry Blaustein, directed the movie Beyond The Mat, which had Jesse Ventura,” he told SLAM! Wrestling. The director Blaustein will be one of many guests at the event.

Crack open the piggy bank, however. A former wrestling star-turned-actor-turned-politician doesn’t come cheap. Autographs are $30 (all prices USD); Polaroids are $30 and an autographed Polaroid is $35; using your own camera is a mere $25.

Ventura is just the tip of the proverbial iceberg on the Turnbuckle Promotions show.

Blaustein, who is running his first event after being a vendor at many others, said that he tried to get someone for everyone.

“I’m just looking for that person that will draw a crowd, people want to meet them, and haven’t been around,” he said, explaining that his show as “a good mix” for a “demographic from 22 to 75 … from Christy Hemme to Bruno Sammartino.” 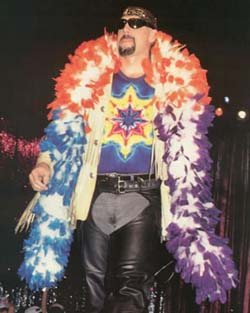 Headlining are Sammartino, and one of the men who beat him for the WWWF world title, “Superstar” Billy Graham; there’s an NWO reunion of sorts with Kevin Nash, Scott Hall, Sean Waltman, Ted DiBiase and Virgil; there’s a rare occurrence with Terry and Dory Funk Jr. in the room at the same time; other tag teams back together include the Valiant Brothers (Jimmy and Johnny, with manager Lou Albano) and the Killer Bees.

Finally, from the entertainment world comes Tony Burton, who was Rocky Balboa’s cornerman, Duke, in all six Rocky movies, Traci Bingham, who was on Baywatch and The Surreal Life, and a couple of Playboy-types in Chanel Ryan and Brande Roderick.

Who was Blaustein the most excited about booking? “I don’t know. That’s a tough one. There’s over 60 wrestlers. I’m pretty excited about Terry and Dory Funk together.”