When it comes to hardcore wrestling action, TNA Wrestling has outshone WWE in recent years. The new ECW has failed to live up to the expectations of the bloodthirsty fans of the original. TNA, on the other hand, has delivered many an extreme highlights, most often involving Abyss, the company’s resident monster, and the subject of a new DVD release, Doomsday: The Best of Abyss.

Abyss has carved out a niche for himself as one of the leaders of the new generation of extreme thanks to his penchant for thumbtacks and tables, and an apparent willingness to endanger his own personal health and safety in the course of a match. This set showcases examples of this in the form of eight brutal and bloody matches from 2005 and 2006. 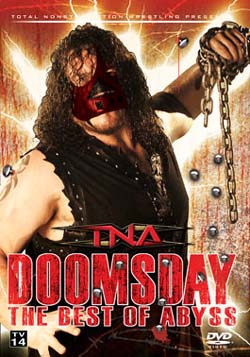 Personal highlights include his gruesome Barbed Wire Massacre match between he and Sabu from Turning Point 2005 and his Falls Count Anywhere battle against Rhino at Against All Odds 2006. The first of those is perhaps TNA’s most gruesome match ever, as both men get carved and shredded in the barbed wire ropes. The second features one of TNA’s most creative spots where a barrier wall in the stands is broken, leading to a super gore off of the bleachers and down through a stack of tables below.

Other matches shown are the Monsters Ball 2 and 3 — featuring Jeff Hardy’s swanton leap off of the entrance stage, and Abyss’ giant elbow off the scaffolding onto Brother Runt, respectively — and the monster’s gimmick matches against AJ Styles (Lockdown 2005), Jeff Hardy (Destination X 2005), Christian Cage (Lockdown 2006) and Sting (Genesis 2006) where he won the NWA Heavyweight Championship in the infamous DQ finish. Depending on your tolerance for hardcore matches, you’ll either really like the set or you won’t.

The problem, though, is that if you do like them, chances are you already bought last year’s Best of the Bloodiest Brawls set. Four of the matches on this set were released on that compilation, so you may not want to fork out the money again based on the matches alone.

In that case, one must also look at the special features offered. Doomsday includes a few of these, including Abyss’ TNA debut, a match from the weekly pay-per-view days, a photo gallery, and a character history. The last of those is comprised of the promos and interviews from the end of 2006 through 2007 where Abyss’ life story and the whole deal with his father’s shooting were revealed on-screen during his feud with Sting. Unfortunately, nothing new is added to these segments; there are no behind-the-scenes comments from the participants are offered, and nothing beyond the character’s storyline history is revealed.

This is kind of disappointing. Previous releases on Sting and AJ Styles included insightful interviews with those stars and a lot of personal details and reflections were a nice touch. Sure, there’s something to be said for keeping a certain mystique around the Abyss character, but I would have really liked to see honest impressions about some of the people who he’s worked with over the past couple of years. A lot of his opponents have been really giving of themselves, taking moves that they wouldn’t normally (Sting, for example, getting slammed into an ocean of tacks), and it would have been interesting to hear their motivations for doing so.

If those types of extra features are your main motivation for buying the DVDs, then Doomsday: The Best of Abyss isn’t a must-have. But if you’re a fan of extreme matches, then this is a worthwhile addition to your collection.