CHARLOTTE — A new twist on an old idea produced a few tears and a lot of good cheer at the NWA Legends Fanfest. 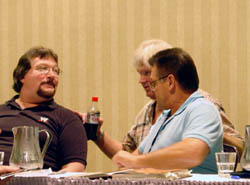 More than 200 fans attended the banquet, sitting with the honorees and wrestlers who careers ranged from the 1960s to today, such as Les Thatcher, Gregory Helms, Dustin Rhodes, and Bill Eadie.

“I’m taking the 12-step program for recovering bookers, but if I had a roster like this, I’d want to do it again,” cracked emcee Jim Cornette, now management authority in TNA Wrestling.

Every presentation during the 90-minute program evoked memories of wrestling’s territorial days, when the Mid-Atlantic region, run by Jim Crockett Promotions, was a must-see for fans and a must-be-there for grapplers.

David Crockett, one of Jim’s sons and a TV announcer in his own right, said he was thrilled to see the recognition accorded to the stars of the promotion. “I grew up with these guys rode with these guys … I’m so pleased to be here with them again.”

One of the most emotional moments of the night came when Crockett introduced former broadcast partner Caudle, who suffered two heart attacks in June, but vowed to be at Fanfest. The popular voice of Mid-Atlantic wrestling, and later Smoky Mountain Wrestling, Caudle got a standing ovation and a tribute from his son Michael, a doctor in Memphis, Tenn.

Hawk, who flew to Charlotte from his home in Texas, brushed away tears when he thought of Hansen, his tag team partner for 16 years. Accompanied by Hansen’s son and daughter, Hawk reflected, “He was more than a partner to myself. He was a brother, a friend — you name it.” Noted Gary Hart, who managed the duo: “They were a team the likes of which you don’t see any longer.”

Hawk wryly noted that he first worked for the senior Crockett in 1950, “when his office was in his pocket … I may not seem happy tonight but I’m a very happy person.”

Ole Anderson, battling multiple sclerosis, was joined by Brad Anderson, Gene’s son, in accepting an honor for the famous Anderson Brothers team. “All he ever did was reference the Minnesota Wrecking Crew; Ole did this, Ole did that,” Brad said of his father, who died in 1991. “That was the best time of his life.”

Long-time referee Tommy Young introduced Scott, who was largely responsible for putting the territory on the fast track in the 1970s with his booking expertise; Scott did the same for the inaugural WrestleManias.

To Young, though, Scott was the man who gave him a break when he was out of work after the demise of the International Wrestling Association, a rival to Jim Crockett Promotions. “I run the show here. I’m going to use you,” Young recalled his friend saying.

“I think it was probably one of the greatest times in my life, when I did the promotion, the booking, and things like that,” Scott added.

Banner, who also has fought serious health issues in recent years, experienced a reunion of sorts when she was introduced to the audience by Baby Doll (Nickla Roberts), the daughter of Lorraine Johnson. Banner and Johnson were a top tag team, in addition to her singles crown.

In an entertaining and heartfelt speech, Roberts referred to Banner as a trailblazer. “It was a time in history when women were starting to have power. Lorraine Johnson and Penny Banner — man, they tore it up!”

Banner took the occasion to bring her friendship with Johnson full circle. “Little did I know that 48 years after I first saw my partner, Lorraine Johnson, that twinkle in her eye would present me with an award.”