The Great American Bash marks the fourth pay-per-view since the WWE decided to end single-brand pay-per-views, and our worst fears have been realized. Every month, all three of the top titles are on the line, to say nothing of the lesser belts, leaving room for little else on the show. No Mr. Kennedy tonight? Say it isn’t so.

Giving credit where credit is due, this year’s GAB offered up some interesting gimmick matches so the fans in San Jose had something to watch besides just title matches. But the main event was for the WWE title, pitting Bobby Lashley against John Cena in a match built up to appear like a toss-up. 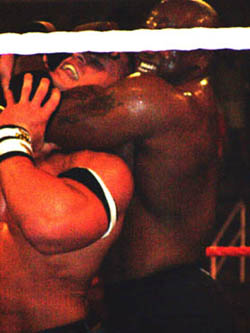 Cena and Lashley started off the match with an old fashioned test of strength. Lashley leapfrogged Cena and took him down with a shoulder block. Lashley forced Cena into the corner, driving his shoulder into the gut of the champion. After a sidewalk slam, Cena kicked out of a pin.

Lashley held the champ in a delayed vertical suplex. After kicking out of another pin, Cena responded with a throwback, then hit leg drop off the rope. Lashley kicked out and locked on a body scissors.

The champ powered out and hit a modified side slam. Cena pulled off the Five Knuckle Shuffle, and Lashley walked into an F-U attempt. Lashley escaped, then nailed a power slam. The champ was then placed in the torture rack. Lashley tried for a slam, but the champ countered into an F-U. Cena got an arm over on Lashley, but the challenger kicked out.

After a shot to the head, Lashley exploded with a clothesline. Lashley stalked Cena, waiting for a spear. The champ instead dropped him with a toe hold and locked in the STF-U. Lashley struggled and finally got to the ropes.

The next WWE pay-per-view is SummerSlam on August 26th.

If you’ve been with us for the past few years, you know the drill by now. Nick’s comments will be in plain type with Dale’s remarks in italics.

I’m loving how the Smackdown announce team is putting this match over like it’s a battle between two up-and-coming young stars. I’m fairly certain Matt Hardy has been on the roster for a while. M.V.P. tries for a belly-to-back superplex at one point and Hardy twists in mid-air to reverse it. J.R. calls it a bulldog, but it never really makes it there. The crowd is really starting to get into the back and forth action when things end kind of abruptly. M.V.P. hits a big boot to the face and a kind of lackluster Playmaker to finish off Hardy. A good match until the very end.

Todd Grisham gets a word with Dusty Rhodes on his big match with Randy Orton. It’s not a coherent word, though, as the American Dream tells a story about a bull and some cows. Apparently bulls say, “Moooo!” Yes, even my eight-month-old daughter knows that.

It’s nice to see Funaki is still a WWE employee, because I don’t remember the last time I saw him. The deal here is that the first man to score a pinfall or submission wins the title. A popular theory among the other viewers in the room is that Rey Mysterio may get involved somehow. Well, someone else gets involved. After a variety of high-flying moves and near-falls, Hornswoggle runs down and hits the Tadpole Splash. The ref counts the three and the little leprechaun is the new Cruiserweight Champion! The five combatants are understandably upset, but Hornswoggle is able to escape to safety beneath the ring.

Sandman vs. Carlito — Singapore cane on a Pole Match

Carlito spits at the Sandman from the apron. Carlito misses a springboard elbow, allowing Sandman to climb the pole and get the cane. Carlito ducks the kendo shot and immediately hits the back cracker. A kendo stick match where there isn’t a cane shot? Okaaaay…

Winner… Carlito at 5 minutes and 6 seconds.

Grisham interviews Randy Orton, who points out that today is Shawn Michaels’ birthday, although HBK doesn’t know it. You know the concussion and all.

Candice hits a real nice drop kick, and then climbs the top rope and hits a flying body press. Melina kicks out, and then ducks a heel kick. Candice hits a standing bulldog and gets the pin.

Matt tells his brother Jeff to stay focused in his match. Candice Michelle walks in and puts on a show for the boys. Ron Simmons, your thoughts? “DAAAAMN!”

Umaga dominates the match early, locking in a nerve pinch. Umaga keeps locking in the nerve pinch. Hardy tries to break the hold with a slam, but Umaga falls on him. Umaga then splashes Hardy from the middle rope. The second time Hardy gets his legs up but is caught coming off the ropes. Hardy kicks out of the slam and pin. Hardy rolls away from a flying head butt. Jeff hits a mule kick, followed by a Twist of Fate. Hardy low bridges Umaga, then hits a baseball slide. Hardy then throws himself over the top rope, crashing into Umaga. Hardy dodges a whiplash in the corner and counters with the Whisper in the Wind.

Note: not a good night for J.R. as he calls is the Twist of Fate. Back to the match!

Hardy dodges a corner splash and Umaga smacks the ring post. Hardy climbs the ring post and hits the Swanton Bomb. Umaga kicks out. Umaga blocks a Twist of Fate and slams Hardy into the corner. Umaga hits the whiplash, then picks up Hardy and nails him with the Samoan Spike.

Winner… and still Intercontinental Champion … Umaga at 11 minutes and 32 seconds.

Why won’t Punk get the push he seems to deserve? I think the WWE gets upset sometimes when guys get over on their own before the people behind the scenes are ready to push them. In any case, this is another quality match that comes to an unusually quick end. Punk has a couple of shots to win, but Morrison catches him coming off the top with a kick and pins him to retain his title.

There’s much posturing by Orton to start the match. Once they lock up Orton says he has a fever, and there’s only one cure… more cowbell! Orton works over Dusty’s knee with the bell. Dusty knocks down Orton with the elbow but misses a knee drop. Orton picks up the cowbell, clocking Rhodes in the back of the head. Orton covers for the pin.

Cody Rhodes comes to the rescue to save his dad from a post-match beating at the hands of the Legend Killer. Despite the viewers around me calling for a turn by the son, Orton backs down and slinks back up the ramp.

Count me in the camp that doesn’t care who wins this one as long as his name is not Khali. Things start out in fairly conventional fashion, but the action picks up when Khali clears off one of the announce tables. The champ ends up taking the ride as both of the challengers join forces to chokeslam him through it. Kane pulls off a solo chokeslam on Khali back in the ring, and Batista nails him with a spinebuster. The challengers attempt to settle things among themselves, but Khali drags Batista off on Kane and throws him into the steps. One chokeslam to Kane later, Khali has his hand raised in victory. JBL puts over Khali’s performance as dominant, which is strange considering he was on the wrong end of the punishment for much of the match.

Winner… and still World Heavyweight Champion … Great Khali at 10 minutes and one second.

King Booker walks out to address the fact that Triple H is not the king of kings. Booker proclaims himself the only king in WWE. Booker then sets his sights on Jerry Lawler. Booker wants Lawler to kneel before him. Lawler tells Booker to come down and get his crown. Booker says this is now an act of treason, and walks from the ring.

After the match, Cena and Lashley show respect for each other as the show ends.

Dale Plummer and Nick Tylwalk know what the penalty for treason is at SLAM! Wrestling — it involves being forced to watch Snitsky matches on a continuous loop for 24 hours straight — but have no clue what punishment one would receive for a similar offense in the land of King Booker.