The wrestling fraternity, which has already mourned several passings in 2007, has lost another member as George Caiazzo, better known as John Kronus. He was 38.

Kronus was found dead Wednesday at his girlfriend’s apartment at 57 Blueberry Place on Blueberry Lane in Laconia, New Hampshire. Police determined Wednesday afternoon that the death is not suspicious in nature. An autopsy was performed, and a toxicology report will be produced in the coming months. 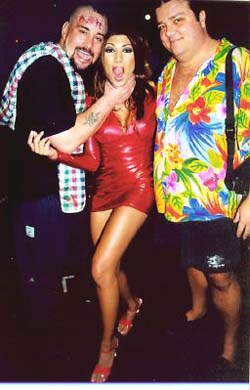 The 6-foot-3, 290-pound Caiazzo grew up in Everett, Mass. He is best remembered for his work in the tag team “The Eliminators” with Perry Saturn (Perry Satullo), roughly from 1995 to 1997. They were a team ECW announcer Joey Styles often referred to as “the greatest tag team in the world.”

According to The Rise & Fall of ECW book, Saturn met Caiazzo when Caiazzo was working as a bouncer in a bar. Saturn arranged for Caiazo to train with Killer Kowalski — who’d trained Saturn as well.

The two were multi-time ECW Tag Team Champions, sometimes managed by Jason Knight, and a headline duo during the promotion’s transition from a regional company to an international entity. Kronus was also one of the first out of the gate during the mini ECW Invasion of the former WWF in 1997. He was also a tag champion with Saturn in the United States Wrestling Association.

“Kronus was the best natural athlete I ever saw in the ring,” Mike Nova (a.k.a. Nova, Simon Dean) said in The Rise & Fall of ECW. “He was 6-foot-2, nearly 300 pounds. I remember all of us in the ring one day f—— around with a crash pad. We were trying to do the Shooting Star Press, the Billy Kidman move, and none of us really had the balls to do it. He went up to the ring and did it, not only effortlessly, but he did it three-quarters of the way across the ring. He and Too Cold Scorpio were two of the greatest flyers I had ever seen.”

Kronus’s run as part of The Eliminators, however, would end soon after the WWF appearance, as Saturn would first be injured, then jump to World Championship Wrestling. Kronus would continue for two more years in ECW, during which time he would capture the tag titles one more time, this time alongside former rival New Jack.

Once he left ECW in 1999, Kronus’s next and final major stop in his career would be with Xtreme Pro Wrestling, where he would hold the company’s world heavyweight title. He retired early in the new millennium, though he would briefly return to the ring during the Hardcore Homecoming reunion tour.

According to a story in the Laconia, NH newspaper, The Citizen, Caiazzo had undergone two knee surgeries in the past year that left him temporarily disabled.

“I am sick of writing blogs about friends/peers who have died. There are just too many and it makes me sick to my stomach. I really loved Kronus,” Francine Fournier wrote on her blog. “We always got along great and I loved working with him (except when I had to take total elimination cause that really sucked). He was a funny, lovable guy who was sweet and caring. My heart breaks right now because I only remember how goofy he was and that he always made me smile.”

Caiazzo is survived by his nine-year-old son, Gage, of Philadelphia.