NASHVILLE – If Sunday’s Slammiversary is the main meal for TNA Wrestling fans in Nashville, then Saturday’s Fan Fest would have to be considered as an excellent appetizer. Nearly a thousand fans got the chance to meet their favourite TNA stars to get autographs, take pictures, and talk about the company’s return to its original home of Nashville TN.

Nearly every one of TNA’s stars were on hand for the four-hour event, which precedes Sunday’s show, which sees TNA Wrestling return to Nashville since it moved to Universal Studios in Orlando.

For many in the company, it was a chance to return to their own hometown. 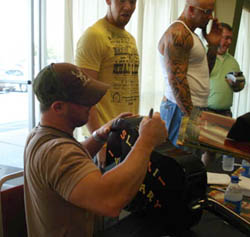 A.J. Styles signs a shirt for a fan. Photos by Bob Kapur

“I’ve been here since the very beginning,” said announcer Don West, a Nashville native. “And I’m so proud to be able to come back here with where we are right now. To watch us persevere and grow, and to get bigger and better, even though there were times that people said that we were done, and to come home to the town where I live, it’s a great feeling.”

“Fallen Angel” Christopher Daniels is another TNA veteran who, between signing autographs on pictures, T-shirts, chairs, figures, and anything else the TNA faithful brought in, had a chance to reflect on his time with the company.

“I always had faith that the company was going to do well, but you never know how well until you get in that position,” Daniels said. “When we were doing Wednesday pay-per-views every week, I don’t know that we imagined we would be getting a show on Spike TV, and monthly pay-per-views. We’ve been taking it one step at a time, and excelling at each step.”

The event was held in two consecutive two-hour sessions, with approximately half the roster appearing at each one. Before each session, the wrestlers were introduced by announcer Jeremy Borash, and given a few moments to cut a promo, say hi to the crowd, or in some cases, interact with the crowd directly.

Team 3-D, for example, called out one quartet of hecklers in the back of the room, daring them to come closer to the stage and repeat their chants of ‘3-D sucks’ within arms-reach of the team. When the fans failed to man up, Brother Ray cut a vintage ECW-style Dudley Boys promo on them, calling into question their manhoods to the delight of the crowd. 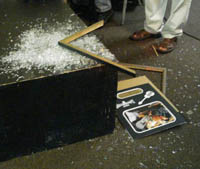 Another highlight was “Tennessee Cowboy” James Storm smashing to pieces a glass-framed autographed photo of Storm getting clobbered with a guitar by one of his opponents on Sunday, former NFL star Frank Wycheck. Luckily, the merchandise booth had a few more pieces of the artwork available, as well as other frames that could be customized with an autographed photo of any member of the TNA roster — a unique souvenir that was being sold in addition to a number of new T-shirts and DVDs. 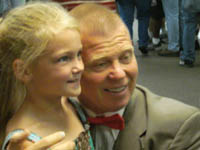 Mr. Backlund and a young fan.

One autograph that was hard to come by, however, was that of Mr. Bob Backlund. Only one person was able to recite the names of all U.S. Presidents in order, which he requires you to do in order to earn his signature. The smart girl who did was rewarded with a formal proclamation of same by Mr. Backlund, who jumped up on the table he was sitting at to inform the crowd.

Other direct fan interaction included a young fan named Collin who was picked to take over announcing duties from Borash and introduce A.J. Styles. The effort earned him an ovation from the crowd, and a hug from Styles who called Collin’s effort ‘phenomenal.’

Those kinds of interactions, and the accessibility of the wrestlers, announcers, backstage agents, and even owners — Dixie Carter mingled among the fans, greeting everyone with a smile and a thank you for attending — helped make the event a truly fan-friendly experience.

Earlier this week, Carter explained why the company does the Fan Fests to SLAM! Wrestling Producer Greg Oliver. “I think it’s just part of what TNA is all about, and that’s about the fans. There’s not another company that’s out there that when this great, ‘Holy shit’ move happens, and they chant ‘T-N-A! T-N-A!’ I just think that for so many of the fans, it’s about the brand as a whole, not necessarily about individuals or things like that. But it’s about something that’s really special and unique. We do not take the fans for granted. We absolutely, through every way we can, we try to give back. These fan interactions are just a chance to let people in that want to and make every one of our stars accessible to meet the fans, hug them and take pictures with them, sign autographs, and kiss their babies.”

“I think it’s great,” echoed Jim Cornette, summing up the events of the day. “These people are getting a great experience. It’s more than just coming in and getting a T-shirt and autograph; they actually get to meet and talk to the wrestlers they like. Back when I was a fan 35 years ago, you had to wait in the alley behind the arena and catch the guys when they were carrying their bags in. This is a huge improvement.”

“Bloodthirsty” Bob Kapur made the trek from Toronto to Nashville by car. He’s hardcore. Email him at [email protected]