ROH gets love from Bruno

Bruno Sammartino, though he thoroughly ripped Vince McMahon and pro wrestling last week on SLAM! Wrestling, does in fact see positives in the industry. 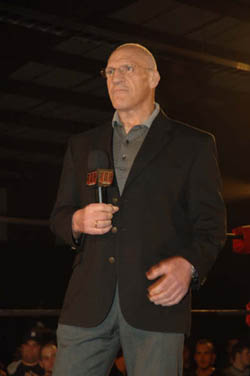 But none of them have the letters “WWE” or “TNA” attached to it, however.

It doesn’t take a genius to realize that when the Living Legend agreed to participate in a Ring Of Honor show in Detroit on March 30, that was his way of giving props to the young promotion.

“To be honest, when they contacted me about being part of the show, I had never heard of them,” Sammartino told SLAM! Wrestling in an exclusive sit-down interview that night in Detroit at the Michigan State Fairgrounds. “So I asked them to send me a DVD and they did and I watched it and you know what? I was pretty impressed with what I saw because it’s different than WWE, which I despise.

“Ring Of Honor seems to be trying to do the right thing.”

Sammartino, noting that WWE has become more of an abomination in recent years, said ROH is the complete opposite of the McMahon entity. And that’s a good thing in the former Fed champion’s eyes.

“From what I’ve seen, there is no nudity, no vulgarity and no profanity here in Ring Of Honor,” said Sammartino. “These guys go out and bust their butts and keep it clean. That’s how wrestling should be. Why do we need the vulgarity in the first place? People need a reason to become interested in a product and if profanity is the way to go, then I just don’t see it.”

That night in Detroit, Sammartino signed autographs for the fans in attendance and also cut a pro-ROH promo in the ring before being interrupted by manager Larry Sweeney and his charges Chris Hero and Tank Toland. A scuffle ensued and Sammartino showed he still has “it” by cold-cocking Sweeney right in the mush.

The fans that night gave Sammartino a standing ovation.

Sammartino also touched on what, in his mind, makes ROH a future powerhouse. He said the majority of the wrestlers are under the age of 28 and “realy work hard. There are no steroid freaks here and I think these guys are genuinely in naturally great shape.”

The since-departed “Fallen Angel” Christopher Daniels was a name Sammartino mentioned as someone who could make it big in the wrestling business. Now entrenched exclusively in TNA, Daniels earned praise from Sammartino, who also took a liking to the Dragon Gate superstars from Japan.

“That Daniels guy, boy, can he ever execute,” noted Sammartino. “Those Japanese guys, wow. They look really good. These guys here, I think could go 45 minutes or an hour like I used to back in my day. I really like the upside of Ring Of Honor.” 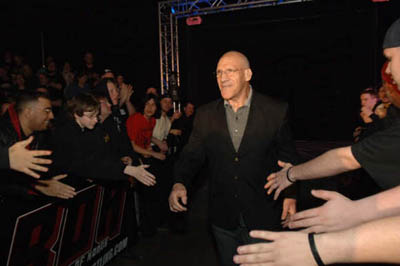 Bruno Sammartino heads to the ring at Ring of Honor’s show in Detroit March 30. Photo by Mike Mastrandrea

Squinting at the notion that TNA may or may not be competition for WWE, Sammartino said TNA is in fact nowhere near WWE is, but with hard work and some direction, TNA can keep ascending the ladder to success.

“I think TNA talks a good game, but a lot of their product is imitating and copying the WWE,” Sammartino observed. “I don’t think that company has good judgment behind the scenes. I don’t think they can draw either. I remember way back when we sold out Madison Square Garden 211 straight times. And that wasn’t just going there once a year like they do now.”

On the odd occasion, such as last weekend in New Jersey and the time in Motown, Sammartino makes appearances and signs autographs for fans. He said the fans make the ultimate decision about a wrestling product and hopes ROH gets positive feedback.

“I think Ring Of Honor, in time, will absolutely give WWE a run for their money,” he said. “It’ll be hard, but I think it can be done. Plus, if me making an appearance brings a few more people into the building, I’d like to help out in any way I can.

“But seriously, the type of wrestling Ring Of Honor portrays is what will keep this industry alive.”

ROH’s next shows are this Friday’s “Reborn Again” at the Hartford (Conn.) Expo Center and Saturday’s “Respect Is Earned” at the Manhattan Center in New York City, which will be taped for pay-per-view.

EDITOR’S NOTE: This was Part 2 of the two-part series on Bruno Sammartino. See? He’s not all negative when it comes to pro wrestling.

Who agrees with Bruno? Matt Mackinder does. Matt also wants to thank fellow SLAM! Wrestling writer Jason Clevett for helping to arrange the interview with Sammartino.