If you have aspirations to work in the wrestling business, So You Want To Be A Pro Wrestler (And Other Ways To Get A Job In Wrestling) should be on your bookshelf.

The 82-page self-published how-to-guide also offers pointers from author Bill Banks along with other wrestling personalities regarding different aspects of breaking into the profession.

Banks has worked behind the scenes for WWE, WCW and TNA — all before turning 30. Banks recently discussed his new book along with an array of topics with SLAM! Wrestling. 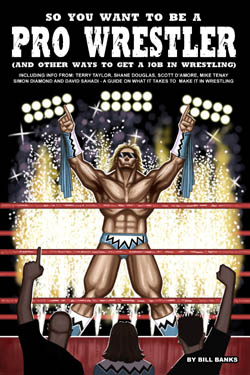 So You Want To Be A Pro Wrestler (And Other Ways To Get A Job In Wrestling), cover art by Scott Blair

“I wanted to write this book for about two years,” explained Banks. “I decided to finally publish it because, quite honestly, I hope it helps a lot of these kids out there today that want to get into wrestling, or even wrestlers on the independent scene looking to take that next step to the big time. Since the wrestling boom in the late 1990s, there have been so many newcomers that have tried to break in but failed for one reason or another. The business has changed so drastically and now a lot of these guys on the independents don’t have a clue about what they’re doing. They dress like bums, don’t know psychology and just go from one high spot to another. To a lot of people inside the business, it’s very alarming. Back in the 1970s and even 1980s, there were so few national promotions that it was extremely tough to even get a roster spot. You had to be dedicated to the business, learn it the right way and earn the respect of your peers before you would be accepted. Today, anyone can call themselves a promoter and hold a wrestling event — and because a lot of these promoters are just about making money, they will let anyone walk in off the street to wrestle for them. Sadly, I don’t see the trend reversing itself anytime soon, but hopefully this book will teach newcomers why it’s important to do it the right way.”

While majoring in Journalism at Southern Connecticut State University, Banks landed a part-time internship during his sophomore year in 1995 for WWE’s online media department. From there, Banks worked his way up through the ranks as an Assistant Editor to Vince Russo for both the WWE and Raw magazines before serving as Russo’s creative assistant.

Banks describes climbing the WWE corporate ladder by writing, “From May of 1998 to the time I left the WWF in October of 1999, I helped in whatever capacity Russo would let me, whether it was producing television interviews, evaluating new talent or working with the wrestlers at Pay-Per-Views and television tapings. When I wasn’t on the road, I continued to write for the WWF and RAW Magazines and was an Associate Producer for WWE.com, which by that point had a staff of 15 people. The ratings had turned around, we left WCW in the dust, the company was generating millions of dollars and we were on top of the world. I also was granted the opportunity by Russo to serve as an assistant on the writing team with he and Ferrara. Every weekend, I would type out four pages or more of ideas for television. I would then go to Russo’s house on Tuesday mornings to meet with them and pitch the ideas.” 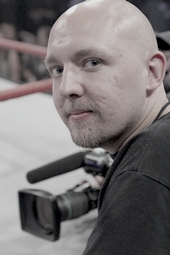 Banks followed Russo and Ferrara to WCW where he served as a television writer, producer and website manager up until the company was purchased by WWE in 2001. Coupled with his dismal experience in WCW and the realization he would never be welcomed back to WWE; Banks left the business altogether to work for an architecture firm before joining TNA in July 2003.

The actual book is broken down into several sections along with testimonies from a variety of individuals, the majority of which are affiliated with TNA. The first section is entitled “Get Your Education First.”

Scott D’Amore emphasizes this point in the text by stating:

“The example I always cite is Edge and Christian Cage. They started training right after they finished high school and while they were in college. They would work shows here and there on the weekends, but college always came first with them. For me, wrestling came first and if there was any time for college I did it. They both graduated and got their degrees — I’m still a few credits short. They could have never imagined they would one day be millionaires and top stars in the business. At the time they were two skinny 20-year-old guys who weren’t guaranteed anything in the business. They did it the right way. If they would have blown out a knee or had their wrestling career cut short by injury, they had their degree to fall back on.”

Banks does a nice job of describing just how difficult it is to become successful in the world of sports entertainment. The book also depicts a variety of pitfalls including dishonest promoters, bad paydays and drug usage.

For anyone hoping to find work as a wrestler for TNA; So You Want To Be A Pro Wrestler includes the company’s Director of Talent Relations, Terry Taylor, views on what wrestlers are lacking today.

“What most wrestlers today lack are the basic fundamentals… Guys want to get in there and do moonsaults and hurricanranas, but they don’t want to know the actual nuts and bolts that make those moves mean something. They don’t respect the business. They want to be stars but they don’t want to embrace what makes them stars. They think the business is here to make them stars. No, it’s not. They’re the vehicle that makes the business better so that everyone can make a living.”

The book has tips on what to include on your application materials, locker room etiquette and contact information for reputable wrestling schools. Furthermore, the book contains advice on how to break into the business in non-wrestling roles such as television production, ring announcer and photographer.

When asked if writing for a wrestling news website alienated an individual’s opportunity to work for a major wrestling company, Banks told SLAM! Wrestling, “I don’t think it hurts to write for wrestling websites. First, it proves that you are a fan of the sport. Second, since most people in the major promotions visit these websites, they become familiar with your work. The only piece of advice I would offer is to avoid outright bashing angles or storylines just because you don’t agree with them. Instead, offer constructive criticism.

“I see so many wrestling writers out there who are convinced they know everything and how things should be done,” continued Banks. “I didn’t even known who some of these major website writers were until I got into the business; however, there are so many outside factors that influence what you see on television, including management and talent decisions. In reality, the online wrestling audience is just a small portion of the global viewing audience. They are very important because they are the hardcore fans, but for a promotion to be truly successful they need to capture the average television viewer as well.”

The book also includes a variety of first-hand accounts such as the events leading up to the last Nitro in Panama City, FL and the subsequent meeting at WCW headquarters.

Currently, Banks resides in Nashville where he juggles a variety of roles in TNA including producer, website manager and DVD manager.

“We are in the process of a full redesign for our website, and we just kicked off our ‘TNA Today’ daily video news updates with Jeremy Borash and Don West,” commented Banks. “In addition, I’m also working on DVD projects on a weekly basis. I’m especially excited about the upcoming Phenomenal: The Best of AJ Styles, Volume 2 release along with a Best of Abyss DVD I am currently working on, which should be out late summer.

“I plan to write several more books in the future that are wrestling related, but I haven’t planned anything out yet,” added Banks. “I enjoy writing, so regardless of whether the books are successful or not; I plan to continue producing them.”