Lori McKinney was just five years old when WrestleMania III came to her home state of Michigan back in 1987. She swore she would do whatever it took to make it to Ford Field for WrestleMania 23. 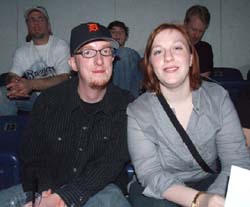 Devin Sylvester and Lori McKinney, just one row from the top of Ford Field. Photos by Matt Mackinder

Even if it meant sitting in the nosebleeds.

Well, she made it to Ford Field.

And she sat two rows from the top of section 340.

“Hey, it’s cool, I can still see the ring,” said the 25-year-old McKinney, a native of Oak Park, Mich. “As long as I was able to find a ticket, I was excited. I had a great time, but I still can’t believe (Shawn) Michaels tapped out.”

McKinney went to WrestleMania 23 with a friend and co-worker, 27-year-old Devin Sylvester from Northville, Mich. Sylvester said he came to Ford Field for two reasons.

“It’s all about the experience,” said Sylvester, an admitted Batista fan (McKinney is wild for The Undertaker). “You don’t get an opportunity like this to come to WrestleMania very often. I’ll just like rubbing it in my friends’ faces that I was here.”

For many fans like McKinney and Sylvester, seating arrangements didn’t matter. Their ticket stub and digital photos (along with the $20 event program) will serve as constant reminders as the night they were part of a Ford Field record crowd of 80,103.

Another fan took pride in the fact that pro wrestling’s biggest extravaganza came to his hometown.

Jason Smith, 29, of Detroit, sat in the risers in the section just to the right of the entrance ramp for the wrestlers. He went to WrestleMania 19 at Seattle’s Safeco Field back in 2003, but said having the event in Detroit, and in a football stadium took the cake.

“I’m glad I have a lot of hours this week for work because all I have left in my pocket are coins,” said Smith. “But to be at WrestleMania, in my hometown, and to be a part of wrestling history, you just can’t put that into words. I may be broke, but I’d do it again. No question.”

Smith also noted that not only does John Cena own D Generation X at WrestleMania, having made Triple H tap last year in Chicago and Michaels this year, but Undertaker also owns Evolution at WrestleMania with wins over Ric Flair, Randy Orton, Triple H and now Batista.

“Check this if I’m wrong, but I also believe Cena is undefeated in Detroit televised events,” added Smith.

Matt Bishop, from East Lansing, Mich., said having WrestleMania at a venue like Ford Field was overwhelming.

“Seeing just a sea of people waiting to get in was incredible and then to actually see all those bodies in seats, especially on the floor level, was something to behold,” the 21-year-old Bishop said, who noted he paid $100 for his seat in section 231. “When the date was announced at WrestleMania 22, I knew I had to go, so I just put away a little fund at that time to prepare to get tickets.” 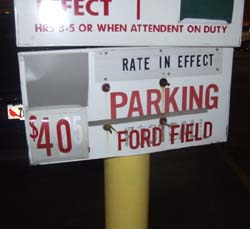 Bishop also saw the premiere of The Condemned with buddy Dave Nastasi of Clinton Township, Mich., with free tickets they received at WWE Fan Axxess and the Hall of Fame ceremony for $86 total (bought two $75 tickets off eBay for $43 apiece).

“I wasn’t too sure about the sightlines on the riser section, which I believe were $250, so we went with the club level which ended up being $100,” Bishop said. “Not a bad view by any means, but a touch far away. But you have to go in with that expectation at a stadium that size, so I was prepared for it.”

Smith went on to say that having WrestleMania in a stadium and outdoors could pose obvious problems, i.e. the weather, but with the WrestleMania 24 countdown already on for Orlando, “I guess WWE knows what they’re doing.”

Apparently, 80,000-plus fans think so, too, Jason. Even if the cost of a parking space was nearly as much as a ticket.

“They really do it up right, don’t they,” said an unidentified fan from Plymouth, Mich. “My goodness.”

Matt Mackinder can breathe again and can also say “my goodness” after being all over Detroit this past weekend.