Mat Matters: The look and feel of ‘Mania live

DETROIT — When you watch an event on television, you see it. When you see an event live, you feel it.

Unfortunately, live fans at Wrestlemania 23 at Ford Field on Sunday night felt with their eyes the presence of a nude man in the ring.

It was quick and painful, but a rowdy and gutsy fan jumped into the ring moments before the match between John Cena and Shawn Michaels, only to be tackled and dragged out with his pants around his ankles. 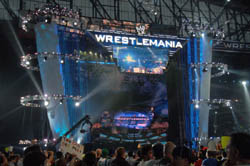 The rest of the night seemed to go much better. The event saw a North American record gate pushing $6 million (final numbers will be released later). When you have those numbers, plus the numbers watching on pay-per-view at home, there is pressure to deliver.

WWE did exactly that.

And the crowd at Detroit’s Ford Field responded. Banners and signs were spread across the skyline of Motor City. The city, hurting in unemployment, put their problems aside for one night. The people and the town were excited to have Wrestlemania here.

Crowds wrapped around Ford Field hours before the event. They even wrapped around neighboring Comerica Park, which was preparing for Major League Baseball’s opening day events Monday.

The event was sold out. A few tickets remained before the event, but it was estimated to have a line stretching two city blocks trying to clamor for what was left.

This was Wrestlemania. It was here again. And it was back in Detroit, home of the infamous Wrestlemania 3 event (from suburban Pontiac) where Hulk Hogan slammed Andre the Giant.

Lights shined throughout Ford Field. These were not the hundreds of lights the WWE had set-up for the event, but the flashes of cameras. The number of flashes would no doubt reach over a million by the time the evening ended.

The event started with a lumberjack tag match between Ric Flair and partner Carlito taking on Gregory Helms and Chavo Guerrero. The highlights would be shown during the PPV, but was a way to have Ric Flair, one of the greatest of all time, wrestle as part of the biggest event in wrestling.

The short match ended when Carlito gave Chavo the backcracker and rolled him up for the pin. Although there were some low points, the crowd was electrified throughout the whole evening.

Many in the crowd stood during most of the first match, the Money in the Bank bout. When Jeff Hardy dove through both Edge and a ladder, the gasp and sudden silence stretched throughout.

Undertaker is to Wrestlemania as the Yankees are to the World Series. But the Yankees have lost a few. Fans acknowledged and respected the streak of 15 wins by the Undertaker by a standing applause while his music blared over the speakers.

The real tension of Umaga vs. Bobby Lashley was with Steve Austin, the guest referee, and Vince and Shane McMahon, who were at ringside. When it seemed all over, another gasp came across the crowd when Austin gave billionaire tycoon Donald Trump a stunner. It seemed shocking that Trump agreed, although taking the move poorly, in being physical attacked.

The final match was going to be interesting going in. Shawn Michaels, who was teasing heel in weeks leading up to the event, has reached legendary status. Flair, Undertaker and Michaels are in the same boat. No matter what they say or do, fans will always cheer and appreciate what they have done in wrestling.

The crowd was truly behind Michaels. Only half the crowd seemed to cheer Cena. But when it was all said and done, the split became overwhelming in support of Cena. His effort and victory was applauded.

It is only fitting that the two largest crowds in Wrestlemania history were held in the area. No other town is more deserving of such an accomplishment.