DETROIT – Rowdiness, cursing and blood are put aside for one night every year when the WWE holds their annual Hall of Fame ceremony. Saturday night’s event at the Fox Theatre allowed for legends to thank the fans for the fans to show their appreciation back.

“I am a wrestling fan,” Jim Ross said during his acceptance speech. “I am the first fan to be inducted in the Hall of Fame.” Ross let the fans know he was representing each of them by being inducted this year.

The WWE has a problem each year. So many people are being worthy of being inducted, but balance needs to be taken into account. True WWE legends come first, making room for enduring WWE wrestlers, Mr. Fuji and the Wild Samoans. The Hall is now a place for all legends to be honored, even if they had little impact inside a WWE ring. Nick Bockwinkel and The Sheik were deservingly honored for their status in the world of wrestling. The Hall of Fame is not just for wrestlers, as was the case for the induction of announcer Jim Ross. Some make a name not only in the WWE but all over the world like Dusty Rhodes and Jerry Lawler. 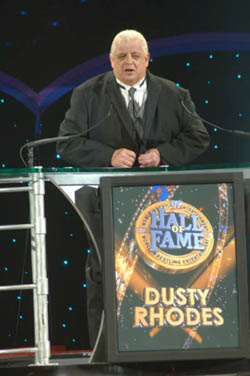 And then there is an area the WWE tries tread carefully with. The wrestling business has been hit with many deaths over the past 15 years, many of whom came prematurely due to drugs and suicide. Rick Rude, Brian Pillman, Davey Boy Smith, Road Warrior Hawk and Bam Bam Bigelow are all deserving to be inducted. But the WWE wants to be careful as to not draw attention to the problem by inducting more than one a year. Unfortunately, the trend is continuous and at that pace, a backlog of names will pile up as the years go by.

Curt Hennig, who died of acute cocaine intoxication in 2003, received an applause and appreciation from the crowd as large as anyone’s. Fans remember what he did in the ring and not how his life ended.

Nick Bockwinkel was the night’s first inductee, and was introduced by his longtime manager Bobby Heenan. Heenan’s comedy is always a show stealer, and this year was no exception.

“Nick is one of the nicest guys I know,” Heenan said about Bockwinkel. “He is a great athlete and performer. He knows 33 ways to mail a letter but none will get the letter to your house.”

Heenan suggested that Bockwinkel would not have made it in the NBA or NFL because he “wasn’t a deadbeat dad, he didn’t beat his wife and doesn’t drink or carry a gun.”

Bockwinkel thanked his wife of 35 years and his children in his speech, but he remembered the man who got him into the business, his father Warren. “His success through training me allowed me to be champion. Thank you dad.”

Two of the oddest characters visually to ever step into a ring were the Wild Samoans, Sika and Afa.

Matt Anoa’i and Samu Fatu’, sons of Sika and Afa respectively, inducted their fathers. Afa took the time to thank their uncle Peter Maivia and Maivia’s son Rocky Johnson for training them during his acceptance speech.

“We owe it to the fans,” Afa said. “We traveled and worked for very little sometimes to make our business better and pave the way for the wrestlers of today.”

Friends Sabu and Rob Van Dam inducted The Sheik, who Bobby Heenan called earlier in the night “the greatest heel ever in the business.”

Rob Van Dam, who was trained by The Sheik, said The Sheik was “hardcore before any of us heard hardcore.”

Van Dam wanted to share some stories about his training with The Sheik, but said if he did, “The Sheik may come bite my nose off.”

Ed Farhat, the real life Sheik, was known as a successful territorial promoters in wrestling. He ran the Detroit-based Big Time Wrestling from the 1960s through the early 1980s. Drawing monthly shows at Detroit’s famed Cobo Hall, everyone from the Funks to Dusty Rhodes came through his territory. His wife Joyce accepted the award for her late husband, who died in 2003.

Gene Okerlund was happy to see him inducted. “I recommended his name to the WWE,” Okerlund told SLAM! Wrestling. “Ed Farhat was a legend in the ring and his memory in Detroit is still here.”

Miami Vice was the highest-rated drama during the mid-1980s, and the WWE capitalized by taping segments parodying the show. Fuji Vice would become a cult hit with fans when it aired on WWE’s TNT show. Don Muraco and Mr. Fuji, who stared in the parodies, were reunited at the Hall of Fame.

Mr. Fuji, who’s real name is Harry Fujiwara, went through three phrases in his career. He was a wrestler, a derby wearing manager and finally a bald Kimono wearing manager who would yell “Banzai” when his wrestler, Yokozuna, would crush opponents. His wrestling career was crowned by five WWE Tag Team titles with partners Prof. Toru Tanaka and Mr. Saito.

“Fuji was the biggest ribber (joker),” Muraco said. “And he would appreciate his work, telling the victims he would investigate who pulled the rib.”

The man who used to carry a cane to the ring as a prop to hit opponents with, now needed a cane to walk to the podium. Fuji, frail, looked like a former shell of himself. He was noticeably smaller and slower in his movements. 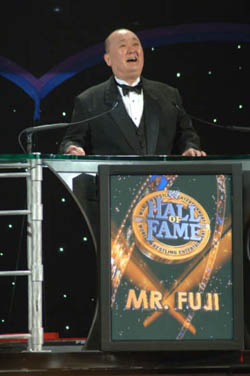 As for the ribs, the 71-year-old Fuji took pride in his work. “I jacked up the back of Toru Tanaka’s car one night. And when he got in, and tried to drive, the wheels would just go around. He tried reverse and nothing. He said, ‘Fuji, I think we have a blown transmission.'”

Jim Ross, a longtime announcer in wrestling, was introduced by Steve Austin, one of Ross’ closest friends. “No disrespect to Gordon Solie, but Jim Ross is not only the best announcer ever in wrestling but also one of the greatest announcers in any profession.”

Ross was brought onstage with a standing chant of his initials “JR, JR.” Ross tried to start his speech but was interrupted by a second standing ovation.

“I was a fan. I wanted to be a wrestler, but genetics didn’t work out,” Ross said. “Plus, you don’t want to see me in tights.”

He shared a story about starting his career as a referee. He would make $40 a night, which was good money for a referee during the 1970s, but he wanted to make more. “I figured out I could drive the wrestlers to the shows and charge each man two cents per mile. And I could save money by sleeping on their hotel floors.”

Wrestlemania IX was the first WWE announcing job for Ross, a night he probably will want to forget as he wore a toga to commemorate the event taking place as Ceasar’s Palace in Las Vegas. He promised the crowd “that toga was burnt long ago.”

“I want to thank Lance Russell who showed my art on local Memphis wrestling and got my foot in the door,” Jerry Lawler said about his first choice to induct him, the legendary Memphis announcer. Those within the WWE recommended William Shatner, who worked an angle in 1995 with Lawler on an episode of Monday Night Raw.

The WWE is probably wishing they went with Lawler’s first choice of Russell. Shatner was given a script to read from on sheets of paper. Shatner, obviously unprepared, read directly from the sheets, rarely looking up. The speech came off as very insincere, and the crowd let him know it with large boos and chants of their displeasure.

“I had a conversation with the other legends in the back,” Lawler said. “It wasn’t about wrestling, though, but Viagra.”

Lawler started wrestling in 1970 and still wrestles on occasion till this day. He thanked those he had the opportunity to wrestle from Lou Thesz and Danny Hodge through Steve Austin and The Rock.

Curt Hennig, known as Mr. Perfect during his WWE days, received maybe the biggest and definitely the most emotional ovation when introduced. After Wade Boggs, baseball Hall of Famer and friend of the late Hennig, introduced Hennig’s father, Larry “The Axe”, mother, wife and four children to the podium, Heenan and Bockwinkel wiped tears from their faces. The two worked closely with Hennig during his career, Hennig as a manager and Bockwinkel as an opponent on many occasions.

Hennig’s oldest son, Joe, wore his father’s old suit jacket with “Mr. Perfect” sparkled across the back. “He was what he said he was,” Curt’s wife, Leonice, told the crowd, “absolutely perfect.”

The ceremony was capped off by the induction of three-time NWA World Champion, Dusty Rhodes. He was the son of a plumber, a phrase he also seemed to work into a promo. Dustin and Cody, the sons of Dusty, inducted their father.

“We are happy to do something special,” Dustin said in the introduction.

“He was also a great father,” Cody said. “If there was a Hall of Fame for fathers, he’d be in that one too.”

Rhodes gave the crowd a workout by asking for standing ovations for Harley Race, Ricky Steamboat, Triple H, Arn Anderson and Ric Flair, who were all in attendance. When Rhodes called Flair “the greatest in-ring performer,” Flair appeared on screen in tears, visually thanking Rhodes for the comment.

“If you are young and want to make in this business,” Rhodes said, “get a tape of Ricky Steamboat.”

Rhodes closed his speech by asking Anderson and Flair if Race and himself could be part of the Four Horsemen.

Flair approved by showing four fingers to the crowd, a longtime sign of the Horsemen.