To borrow from one of her former associates in the wrestling world, Trish Stratus has finally come back to Second City.

The Toronto native, best known for her time with WWE, has signed on to be the host of the popular sketch-comedy troupe’s new talent search program, The Second City’s Next Comedy Legend, which will air on CBC. 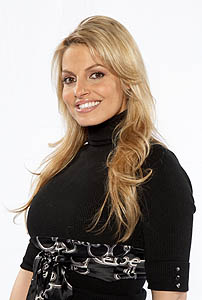 Trish Stratus will hit the airwaves on the CBC for Second City’s Next Comedy Legend.

The involvement with Second City is Stratus’ second large-scale go-around with the company. Stratus, who has also worked with sketch comedy troupes The Royal Canadian Air Farce and MadTV, did a series of performances at Second City’s Toronto theatre while rehabbing from a thumb injury in 2004.

The show, as Stratus explains, will have a similar format to America’s Next Top Model, with a taped format and the judges making all the cuts. For her part, Stratus will take the “Tyra Banks” role on the show as host and liaison between the judges and finalists. While we may not see Trish rolling around on the floor of a makeup room, crying after her locks get trimmed with garden shears, she says that you may see a bit of the supermodel in Stratus’ on-screen performance.

“Because it’s Second City, there will be a satirical twist to it,” Stratus comments, adding that she may pull a Banks and show up with a different hair-do every show, “just to poke fun at that.”

The finalists will be chosen from four cities across Canada (two from each city will advance to the show) — Vancouver on March 20, Calgary on March 24, Halifax on March 27 and Toronto on April 4 (audition forms are available online). Stratus herself would not be surprised at all to see a crowd of wrestling fans at the try-outs, if history plays any part in it.

“They’ll either be coming out and auditioning for the show or they’ll be coming out just to just come out,” she says with a laugh. “Even when I did the Second City shows, I couldn’t believe how I came out on stage and in the first row were guys who I know come to every wrestling show I do in Toronto.”

Not only will Trish be running the show in the audition room, but in other spots as well. Stratus will also be seen visiting with the finalists in the home they will be staying in; and while Stratus’ role will be similar to Tyra in the challenges, the home life, if it tensions rise, could more closely resemble Bill Demott’s job in Tough Enough.

“That’s why they brought me in,” Stratus says amidst chuckles. “Because it’s a new show, we’re creating it as we go and it’s comedy, it’s going to be no-holds-barred.”

While Next Comedy Legend is Stratus’ second full-out run with Second City, she has done other spots in Toronto since her initial performance series.

“I will always go down to their new shows. Every time they do a new show I hope up on stage and do an improve set with them at the end. I’ve gotten pretty close with the crew members there,” she says, adding that one of the Second City writers helped her during her hosting duties at Canada’s Walk of Fame.