WINDSOR, ON. — Everyone remembers their first … WrestleMania that is. This year will be CM Punk’s turn to have those memories on WWE’s largest stage.

“I hope to walk out with gold,” Punk told SLAM! at a recent WWE press conference in Windsor.

Punk is an “Extremist,” or one who wrestles for the ECW brand in the WWE. Currently one of the most popular stars on the brand, Punk hoped he would challenge current ECW Heavyweight Champion Bobby Lashley at Wrestlemania 23. 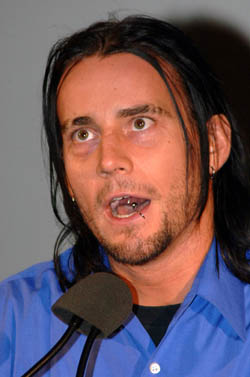 CM Punk at a press conference on Friday, February 2, 2007 to announce WWE events in Windsor, Ontario leading up to WrestleMania 23 in Detroit on April 1st. Photos by Mike Mastrandrea

That hope will not occur, but he will be involved in Money in the Bank match with Booker T, Jeff Hardy and Edge (the final spots has yet to be filled).

This year will mark the first Wrestlemania involving the ECW brand since being rejuvenated by the WWE in May of 2006. When started, it was to stand-alone like the RAW and Smackdown brands, but talent problems, injuries, low attendance and PPV losses, have forced WWE head Vince McMahon to all but join the brand with Smackdown.

Many stars that were looked at as the heart of ECW such as Sabu, Sandman, Tommy Dreamer and now Punk and Rob Van Dam have seen themselves being buried by those who McMahon sees as established WWE stars. Stars he made, and not those who made ECW.

Is Punk going into Wrestlemania with his push curtailed?

“I don’t think I’ve been curtailed. I see it as a slump,” said Punk.

Punk went undefeated within ECW from his debut in June 2006 until January 2007. Since then he has seen televised losses to Bob Holly and Matt Striker.

Although things have changed, and the future of ECW is in limbo, he is living a dream. Once a staple on the independent circuit, he now has made it the highest plateau a wrestler can reach, being in the WWE and a match at Wrestlemania. 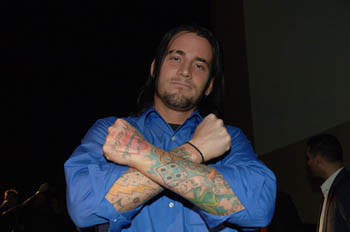 “So many wrestlers have made their careers from Wrestlemania. We are coming to Detroit, where Wrestlemania III was held, and look at all the careers that were made,” he said. “I want this Wrestlemania to define my career like it did theirs.”

Punk remembered watching Wrestlemania III when he was little. He never knew his dreams as a young child would be reached 20 years later.

Hillbilly Jim was alongside with Punk at the press conference. Punk remembers watching Jim, along with midget partners Little Beaver and Haiti Kid take on King Kong Bundy and partners Little Tokyo and Lord Littlebrook. The ending saw one of the most famous moments in wrestling history as Bundy bodyslammed Beaver and then dropped an elbow on him. Although it may have seemed like a normal wrestling maneuver, Bundy outweighed Beaver by almost 400 lbs.

“It was the biggest match of my career,” Hillbilly Jim told the crowd. Punk was listening. He knows he may be saying the same thing in 20 years.

Wrestlemania 23 is expected to break the all-time record box office in gate receipts for a wrestling event in North America with 78,000 fans attending at Ford Field.

“It will be awesome,” Punk predicted.