There’s an old saying “never judge a book by its cover,” and female wrestler Tracey Richards definitely held true to that.

Standing only about 5-foot-3 and speaking in what is described by her peers as a “squeaky, yet sweet voice,” the blonde Richards was often mistaken as having a more innocent demeanor. 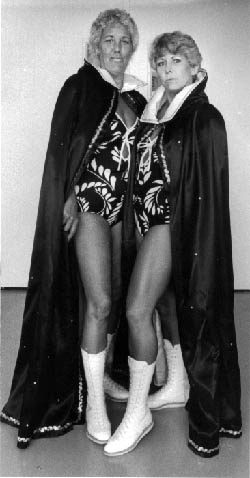 The Arm and Hammer Connection — Beverly Shade and Tracey Richards.

“In actual fact she was meaner than snot in the ring,” recalled Beverly Shade, one of Richards’ trainers and also her tag team partner.

Richards, whose real name is Debra Hunter Newkirk, was born on March 22, 1956. She passed away after a brief bout with cancer on February 25, 2007.

After meeting in 1976, Richards and Shade were extremely close; Richards even lived with Shade and her husband/promoter, Billy Blue Rivers, from 1976 through 1985, and right up until Richards’ final week, they talked to each other on the phone practically every day.

Shade said Richards first received her diagnosis in October 2006. Richards had phoned her friend explaining she wasn’t feeling well. Richards figured it was acid reflux, which was a recurring problem for her. After returning home from her son’s football game, where she had gotten sick several times, Richards went to the emergency room where a tumor was found on her esophagus. It had also spread into her liver, there was a spot on her lung and it was in her lymph nodes, said Shade. Richards was told she was terminal.

A month later while going through chemo, a cyst developed on her head and it was revealed the cancer had spread into her brain.

Richards leaves behind her husband Philip Newkirk and her three children, sons Phillip (19), Corey (17) and daughter Tara (16). A viewing was held in Myrtle Beach, South Carolina at Gold Finch Beach Chapel on February 27 with a funeral service the next day.

Richards also leaves behind mourners in the wrestling world.

Raised in Columbus, Mississippi, Richards was always a wrestling fan. Natasha Rahme, who wrestled as Natasha The Hatchet Lady, recalled that it was actually her who met Richards first because Richards and her mother would show up at every match that she had when she was wrestling down south.

“I’d be in the ring and even if I couldn’t see her, if I heard that voice, screaming and rooting for me, I knew it was my number one fan,” laughed Rahme.

Rahme said that Richards was a huge fan of hers and her frequent opponent, Ann Casey. The teenager would be torn sometimes on whom to cheer for, said Rahme. And often after the matches she would approach Rahme asking if she could work out with her sometime or get advice from her because she too wanted to be a wrestler.

This went on for about two or three years and then Rahme went to Florida to open a wrestling school with Shade. The two advertised and, lo and behold, Rahme’s number one fan showed up.

“Tracey’s sister, Annie was living in Florida and she saw the ad in the paper,” recalled Shade. “Tracey came down to visit Annie and came out to the school. We got to talking to her and about a week and a half later she came back and we started training her.”

Richards was a natural to train, the two remember. An avid bodybuilder as well, Richards was a powerful and gifted worker. She would also be one of the first women to use the power slam in the ring.

“She was our number one student in my mind,” commented Rahme. “We’re both very proud of her.”

Richards originally wrestled as a babyface, but her naturally feisty personality could not be ignored, so she made the natural switch to heel where she was much happier. The change allowed her to be paired with trainer and fellow heel, Shade. The two made up the successful Arm and Hammer Connection. The team would go on to hold the Women’s World Tag Team titles. In singles, Richards also held the Mississippi State Champion belt.

“My husband came up with that name,” explained Shade. “We had the symbol on our capes. The reason we did that was because she was so powerful. She had muscles like you wouldn’t believe in her arms.” 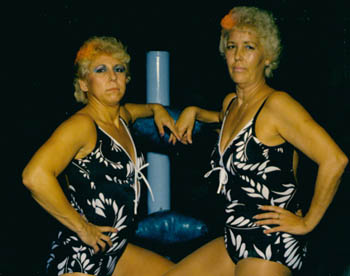 Along with being powerful, Richards is also remembered for being fearless.

Shade remembered a television taping in Mississippi where the two were fighting against Judy Martin and Winona Little Heart. On the way to the ring, Richards started arguing with a fan. In the ring, Richards climbed to the top of the turnbuckle and yelled out, “If you don’t like it bring your big, fat ass up in to the ring!”

“I just went up to her and punched her and said, ‘Tracey we are on television,'” Shade chuckled. “She told me she didn’t care!”

Shade also recalled a tour of Japan. It was very common for female Japanese wrestlers to try and get foreign wrestlers into the ring to work holds during down time, said Shade. During this particular instance some of the girls were trying to get Richards in the ring and Shade believes it was so they could try and hurt her.

“And bless her heart she was just going to get in there with them,” said Shade. “She would have climbed right in, she didn’t care. Natasha and I went in after her and got her out.”

Richards stopped wrestling approximately three or four years ago due to back trouble. Shade said when she wasn’t wrestling Richards would work as a veterinarian assistant; she had received the training in Tampa while she was wrestling.

As for what they will miss most about their protege and friend, Rahme said above all else she will miss Richards’ professionalism and how she made everything easier especially during the many wrestling trips the three of them made together throughout the United States and internationally through such locales as Africa, Spain, Japan and Nigeria.

“When I heard the news of her passing, I closed my eyes, said a prayer and let my mind travel down memory lane,” revealed Rahme. “I thought of us being on an airplane going to matches, all the stories we told each other about the different girls we’d be wrestling and wonder what they were like. We’d ask each other if we were nervous and we’d look at photographs of the women we’d be having matches with if the promoters provided them. She’d say things like, ‘oh I’ll take care of this one’ or ‘that one’s yours, I don’t want to tangle with this one, you can have her.'”

For Shade, she is going to miss her friend, someone who was both fun and extremely considerate. Despite Richards’ illness, when Shade suffered a stroke on January 10th, she called Blue Rivers every day.

Shade and Richards also used to celebrate their birthdays together, Shade’s on the 21st of March, Richards’ on the 22nd. And for her and her husband, the two feel like Richards was like one of their kids since she lived with them for so long. Richards even called Billy “Mr. B.”

Shade fondly called Richards “Spud” in reference to the wrestling term “throwing potatoes” where a wrestler doesn’t throw a good punch and you hit someone real hard.