ST. LOUIS — Nick Ridenour was a south St. Louis kid who like countless others started watching wrestling at a young age. Unlike many others though, Ridenour kept his wrestling interest high and eventually turned that life interest into his dream business, The Pro Wrestling Shirt Shop. On Saturday, February 24th, his business also became the home of the St. Louis Wrestling Hall Of Fame. 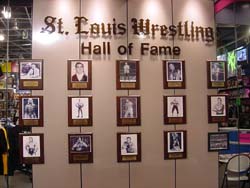 Fans of all ages and demographics started showing up early for the 1 p.m. induction ceremonies. A local tunesmith Jesse James donated his services to play in the mall area where the ceremonies would be held. (Chico Marx may have asked him “how much do you get for not playing?” but Jesse did a good job.)

There was a good crowd in the mall area and looking up you could see many fans leaning over a balcony looking downward. Longtime TV color man and TV ring announcer Mickey Garagiola was first to get a plaque. Garagiola relayed many anecdotes and impressions. Garagiola’s talk was a precursor to the long speeches to come on the next day’s Academy Awards. Big difference though, is that the crowd listened to every word from the affable Garagiola.

Next, a surprise award winner was Larry Matysik. The surprise though was only to Larry, as the fans who voted all put Matysik on their HOF ballot. Matysik also fulfilled the dream of a young wrestling fan by later becoming Sam Muchnick’s right-hand man, TV announcer, Kiel Auditorium announcer, one of the bookers, a promotion owner and author.

Matysik proceeded to be the master of ceremonies by introducing the other inductees starting with promoter Sam Muchnick.

Pat O’Connor was described as maybe the smoothest scientific wrestler ever.

You can’t really have a match without a referee and few refs were better than Joe Schoenberger. Sam Muchnick liked to have people working for him who were active in the community and Schoenberger was very active with promoting youth sports in St Louis.

It was Schoenberger who raised the arm of another St. Louis Hall of Famer, Gene Kiniski, when Kiniski beat Thesz for the title. Gene was big tough and intense which also described another Hall of Famer, Johnny Valentine. Both Kiniski and Valentine were St Louis main eveners for over 20 years and as a wrestler that is a dream fulfilled to headline one of the best pay off towns for decades.

Rough and tough Fritz von Erich, who probably passed on the best genes for wrestling, had many great main events as did his three sons.

Not as rough but plenty tough is St. Louis native Penny Banner. In her youth, sports for females were limited so Penny lived her athletic dream by being a champion wrestler.

Predictable and pro wrestling are usually mutually exclusive terms. Sam Muchnick’s style of promoting though could be as close to predictable as anything in wrestling. It is odd then that the most unpredictable of wresters, Dick The Bruiser, was a nearly 20-year main eventer for the most conservative of promoters and is now a member of the St. Louis Hall of Fame.

Nick’s Pro Wrestling Shirt Shop has a trivia night among its many activities. A good trivia question might be “Which of the pro wrestling Hall Of Fames is St. Louis Hall of Famer Harley Race NOT in?” Race just might be in more pro wrestling hall of fames than the record number of Missouri Title wins he owns.

Later that evening radio station KMOX AM ran a few seconds about the event. It was Matysik mentioning St. Louis Hall of Famer Ric Flair and the crowd’s noisy reaction to that name. As you can guess, it started with a W and followed by several Os.

St Louis is one of the very best baseball towns in the country. Around the stadium are statues of baseball Hall of Famers. Being that St. Louis was one of the best wrestling towns in the country, it is too bad Kiel Auditorium does not have some statues of wrestling Hall of Famers around it. In lieu of those statues there is the Hall Of Fame wall in Nick Ridenour’s Pro Wrestling Shirt Shop in the South County Mall.

If singer Jesse James who performed before the ceremonies came back, I would have had him sing Nat King Cole’s Unforgettable to close the day down.