Christy Hemme: From Diva to Wrestler

DETROIT – She started out as a Diva, but Christy Hemme hopes to soon be known as a wrestler.

Hemme awaits the introduction of a full-time women’s division in TNA. If it comes, she will be ready.

Since leaving the WWE, Hemme has been training to wrestle as much as she can from the Inoki Dojo in California to Canada with Scott D’Amore. TNA’s limited women’s roster has left her looking to train elsewhere. Something she has little problem with.

“I have been spending a lot of time training,” Hemme told SlamWrestling.net at the Bound For Glory pay-per-view. “My schedule has me flying all over, but it has also taught me a lot of different styles.” 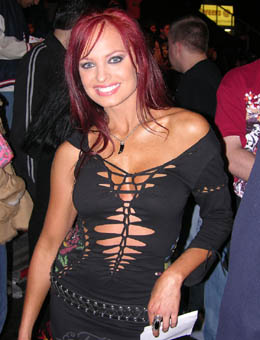 Christy Hemme at the TNA Fanfest before the Bound For Glory pay-per-view in Detroit. Photo by Chris Schramm.

What makes this training different than WWE’s training?

“I was on television and training at the same time,” Hemme said. “It was difficult, as I still had a lot to learn, yet was wrestling on television on a weekly basis.”

She does not want to take a shortcut this time around. “TNA is giving me time to train and learn the skills to wrestle. They do not want to put someone on television that is not ready.”

Hemme was introduced to wrestling when she won WWE’s Diva Search in September 2004. She was on television, wrestling, just weeks later. Many of her matches were with women who were trained as little as she was.

WWE’s wanted to keep Hemme fresh on the minds of the fans. So instead of taking her off television to train, Hemme was quickly thrown into matches with Diva Search runner-up, Carmella DeCesare. By April 2005, Hemme was in the WWE Women’s title match at WrestleMania 21 (losing to champion Trish Stratus).

The WWE look at Hemme’s popularity by her looks, DVD sales and her April 2005 Playboy spread. She knew she wasn’t polished in the ring, but it wasn’t a priority for WWE’s women’s division.

“Everything went by so quickly.” Although it seemed Hemme was exactly what the WWE wanted, she wanted something different. She wanted to wrestle. She did not want to be known as the girl who modeled and won a contest to gain a job with the WWE. Hemme wanted the fans to respect her skills as a good wrestler.

Her time was with the WWE was cut short when she was unexpectedly released in December 2005. Following her release, she posted the following message on her web site:

“I was willing to put my personal life aside to give everything I had to what I was doing and become a better wrestler and performer. Everything happens for a reason and anything that has happened in my life that has knocked me down has only built me back up stronger. I feel stronger than ever and I am hungry for this huge future before me…”

After doing some side projects, including the 2006 Lingerie Bowl, she signed with TNA in April 2006.

Hemme saw immediate differences between the two promotions. “TNA has a different view of women. I feel more comfortable in that aspect (over the WWE). The women’s division isn’t ready, and that is why there is a limited roster of women with TNA. But I am training and the future will be open for me.”

“We are growing,” said Steven Godfrey of TNA public relations. “We have very limited television time now but as we grow, we believe so will the women’s division.”

The TNA women’s division has always been a growing debate among the fans. Often told by those within TNA that it will be coming “soon” but as years passed, nothing has resulted.

“We have one hour of television a week,” Godfrey said, “Its hard getting those on there now the time to develop their characters. It would be even harder if we introduced a new division.”

Hemme isn’t complaining. “TNA is a great company, growing and I will be there when it happens.”

Hemme will be making a long flight for the Queens of Chaos 2 tournament in France on November 12. The tournament will feature women wrestlers from all over the world. This will give her a true test to see if her new training has been successful.