Christy Hemme is the latest WWE Diva to grace the pages of Playboy magazine and her pictorial is in the April issue. She was once a roller-skating Hooters girl, cheerleader, and a trampoline girl on The Man Show. She almost was a part of the Lingerie Bowl until she won the Diva search, then she dropped that promotion like a hot potato.

“I won the Diva search with WWE and after that they (Playboy) asked me if I wanted to pose and represent the WWE Divas,” said Hemme. “I got approval from my family and decided it was a good idea.”

The sassy redhead owns a Harley Dyna Low Rider, which shows that she has a wild side.

“I’ve been riding bikes since I don’t even remember,” she said. 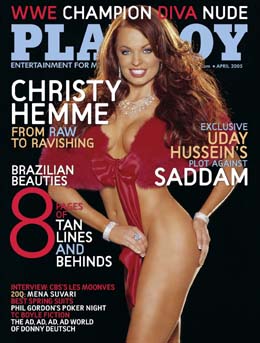 She will be taking on six-time WWE Women’s Champ Trish Stratus at Wrestlemania 21. In a recent episode of RAW Stratus beat her up, dragged her to the centre of the ring and spray painted the word “SLUT” on her back. Was the paint was easy to clean off?

“No!” she shouted. “I had to scrub that stuff off my back. Wasn’t that mean the way she dragged me?”

And now the stage is set. She is the girl next door taking on the veteran Stratus. Lita is in Hemme’s corner and she is helping to train her.

“I am training with one of the best wrestlers ever, and that’s Lita,” Hemme said. “I am so excited and amped up and ready to go. I think it’s going to end up being a great match and I’m just ready to take Trish on.”

This is an evolving storyline that is sure to reach a head in Hollywood California on Sunday, April 3rd. Is that enough time for this go-getter to be able to take on a wrestler as experienced as Stratus?

“Everyday we are getting in the ring and learning every aspect of the business as far as wrestling goes. I am starting from ground zero and I am going to work my ass off to learn as much as I can before the match,” said a confident Hemme.