Ted DiBiase has just gotten home to Mississippi from a Promise Keepers speaking engagement in Regina, Sask. It’s a whole different kind of trip than he had been making over the last couple of years as a WWE road agent, but he’s looking forward to preaching and teaching on his own now.

“I had a good run here a second time. I loved being around the business. It’s a business that I loved all my life. The WWE, if you’re going to be in the wrestling business, that’s the place to be, man. That’s the only place to be,” DiBiase told SLAM! Wrestling on Monday. 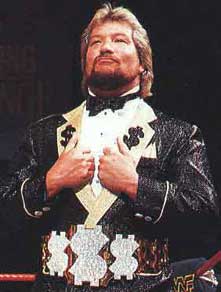 “I’m on good terms with them,” he said, and expressed that he was completely open to coming back for just about anything the company needed, from autograph sessions to the occasional appearance on TV. He just doesn’t want the full-time schedule any longer.

“I’m going to pull myself back into full-time ministry, which is really where my passion is at right now,” DiBiase said. “In addition to that, you know what, there were some things that I was good at when I was back there with them, but there were some things that I wasn’t too good at. Well, why don’t I utilize what I can do best, and what I can do best is hands-on, watching these guys, and critiquing what they do. That’s where this school idea came up.”

Like a lot of veteran wrestlers, DiBiase still feels he has a lot to contribute and is mulling the opening of a wrestling school close to home.

“Obviously, I can’t physically get in the ring and do it anymore. If I think I can get somebody that I think is good, and I have somebody in mind that would be my trainer, and basically run the thing for me. I’d show up two, three days a week, critique the work, and stay on top of that, and do what I can do. I think I can teach some guys, I get them to the level where I can say, ‘You know what? I think you can go on to our developmental program now,'” explained DiBiase.

Of course, DiBiase might have a couple of reasons to visit the WWE developmental territories too — his two oldest sons, Ted Jr. and Michael, are training to be pro wrestlers with Harley Race in his World Wrestling League.

“I just had them up here in Chicago with me Saturday night [for a show],” Race said. Both are coming along. “Ted Jr. is a little ahead of Michael, but he was around his father a lot longer than the other one was.”

“As a matter of fact, [WWE talent relations boss] Johnny [Laurinaitas] was talking to me about when I wanted to get the boys over into their developmental program. It’s probably going to be sooner than later,” said the pleased father.

DiBiase said that he was initially very reluctant to have his sons involved in pro wrestling, but his last go-round with WWE behind-the-scenes really allowed him to see how the business had changed from his heyday as “The Million Dollar Man” in the late ’80s. It’s much more of a business now, very corporate, and even the travel is more reasonable and structured, the overseas trips aside.

“I didn’t encourage my boys. Now two of my three boys are training to wrestle right now. I said at least get a college education. The oldest didn’t, and he’s the hardhead … My 23-year-old has a Bachelor’s Degree in Business Administration, and probably got a good shot at it from what Harley tells me,” DiBiase said.

He also has another son still in college. “Of course, he’s looking at his brothers going ‘Yeah, I’m next.’ So we’ll see. The difference now is the business is much more corporate. I said, ‘That’s the upside, guys.’

“The other upside is because of me and my name and everything, and because [WWE boss] Vince [McMahon], he likes to see second- and third-generation guys make it. Now, he’s not going to hand it to you. It’s kind of like, you might get looked at because of who your dad was and everything; the downside is there’s probably going to be more expected of you because of the name. In terms of getting an opportunity, you’ll get an opportunity, but you’ve got to produce. It’s one of those businesses. They don’t give you too many opportunities.”

DiBiase himself is only just opening his own doors to the opportunities to preach the word of God again. Those bookings will come, he said, it just takes time to let the proper channels know that he’s available.

In the meantime, he’ll try to strike a balance between wrestling and religion and family. Already announced is a clinic at the AWA/WSW Back Breakers Training Center in Durham, Conn., on Sunday, November 26th starting at 3:00 p.m. To pre-register, email awa_conn@yahoo.com or call 203-260-8019, or visit www.worldstarwrestlingfederation.com.