She Nay Nay banks on a new career

Athanasia Alexopoulus is not following your typical career path. She recently gave up a well-paying job at a bank to pursue her dream of becoming a full-time professional wrestler under the name She Nay Nay.

A passion for wrestling started at an early age for Alexopoulus. “I can still remember the first time I watched wrestling on television. I must have been 12 years old. I remember being in a Canadian Tire store with my sister and my father. We were getting our car maintenance and there was a small television set in the back corner of the waiting room. It was the match between Hacksaw Jim Duggan and Andre the Giant that would define my career path. Who would have thought that a man carrying a two-by-four and an American flag would inspire me to become a professional wrestler?” 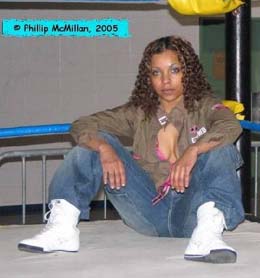 “It was that day that I realized what I wanted to be when I grew up: a professional wrestler. I had thought about being a lawyer or even a stock broker but it didn’t fuel the same passion as being a wrestling superstar,” she said. “Even in school, I was more focused with competing in my amateur wrestling meets than in my school work.”

Unfortunately professional wrestling, especially in Ottawa, is not as mainstream as it may be in Toronto or in the North Eastern and Southern States. “In Ottawa there really isn’t much exposure to the independent wrestling scene unless you are in it or know someone who is.”

“I knew what I wanted to be but I didn’t know exactly how I was going to get there. I figured it would be wise to get an education first and then look into finding a reputable wrestling school where I can learn the craft. Come to look back on it now, it’s funny how it all came about,” she explained. “Scott D’Amore was promoting a wrestling show at my school. Hacksaw Jim Duggan and Jim ‘The Anvil’ Neidhart along with King Kong Bundy were the headliners on the card. I made some contacts at that show, everyone of them directed me to Dave Dalton.”

After three months of training, She Nay Nay’s first match was against Misty Haven in Lachute, Quebec for the Universal Wrestling Alliance. After wrestling a few matches for the UWA, the 5-foot-4, 120-pound grappler was invited to wrestle for promotions like Border City Wrestling and Empire State Wrestling. 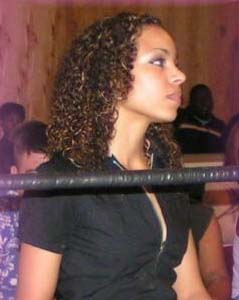 She Nay Nay considers her big break to have occurred this past summer. “A good friend of mine got me in touch with Emile Dupre, who’s the promoter for Grand Prix Wrestling in the Maritimes. I have heard lots of great things about GPW; the stories along with the names of wrestlers who have worked for Emile are legendary. I got into contact with Emile Dupre and sent out a promo package. He was impressed enough to invite me to wrestle for a tour he was booking across the Maritimes for the months of May, June and August of 2006.”

She explained how her summer went. “The first half of the tour we practically wrestled every night. In total, I think we only had two days off. We started off the tour in New Brunswick and wrestled in towns across Nova Scotia, PEI and Northern Quebec. It was my first wrestling tour experience and I loved it. I loved wrestling everyday, I loved being on the road and most of all I loved working the crowd. I never had so much fun getting so much heat, ever. She Nay Nay Parker from Jamaica was definitely not one of the fan favourites yet somebody was buying my pictures. Krista Kiniski [Krysta Hanakowski] was a fan favourite and my opponent; we wrestled every night and our timing improved a lot. I also got the opportunity and the experience to wrestle in a special mixed midget match. I was teamed up with the legendary Frenchy Lamont and we were up against Krista Kiniski and Farmer Pierre. I think that I learned so much not only from just wrestling on a regular basis but also from the talent that was booked on the shows.” 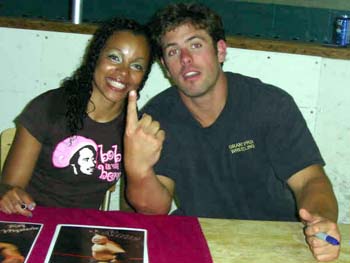 Emile Dupre was very impressed with the matches between She Nay Nay and Kiniski. “Unbelievable how these two girls put on a show, like you wouldn’t believe. It looked like Moolah and old Mae there years ago,” Dupre said. “I was very satisfied. Two nice kids, too. They couldn’t do enough to help. … I think they would have walked here to be in the show. I never saw so much enthusiasm.”

She Nay Nay made a return to Grand Prix Wrestling in August for the second half of the tour to wrestle a rematch between Krista Kiniski. The standard storyline meant that immediately afterwards a bout with Frenchy Ryder would transpire. “Frenchy Ryder was our guest referee and I guess he didn’t quite comprehend that he was not to become involved in my matches with Miss Kiniski. The more involved he would become the more frustrated I would be and, God help me, if I ever lost a match because of his involvement or lack thereof. They say a good character or persona is someone that you can draw from within. She Nay Nay is not a gimmick, rather it’s Athanasia with my hair down.”

Alexopoulus also made the choice to leave the security of a full-time job with the bank. “I have been very fortunate that my employer has been supportive of my extra curricular activity. Although I have changed my work status from that of a full-time to casual, I can now have the best of both worlds. I have been training/wrestling for the past three years and there have been a few opportunities that I was not able to capitalize on in the past due to availability.” 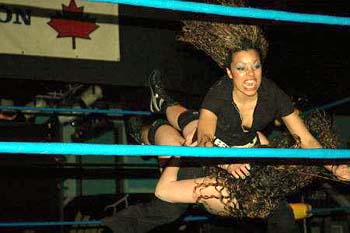 She Nay Nay in action. Photo by Philip McMillan

Needless to say, She Nay Nay is excited about the opportunity. “I am going to be training at the OVW school under Rip Rogers’ guidance. Eventually, I would love to break in with the WWE. My dream is and has always been to be a wrestling superstar.”