“Jumping” Joey Maggs, who died of cardiac arrest on October 15, 2006, at the age of 39, was a good example of a wrestler who was slightly ahead of his time. He was a lightweight battling the heavyweights, but doing an excellent job at it.

While stars today can get away with being under 6-foot, 250 pounds, in Maggs’ heyday with WCW in 1991-98, he was small, and was used regularly as an enhancement worker, putting over guys over.

In fact, perhaps his best known match was on January 30, 1991 at WCW Clash of the Champions #14, when he made Sid Vicious look like an unstoppable monster, taking a devastating powerbomb in the loss. 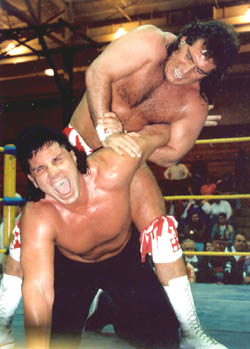 “I think his only drawback was size. He was pretty skilled, a good worker,” recalled Dr. Tom Prichard for SLAM! Wrestling. Prichard worked with Maggs in Atlanta, Pensacola, and Smoky Mountain Wrestling. “I just remember Joey as a fun guy to be around. That was it. If you knew Joey, you knew he liked to have a good time.”

Later in 1991, WCW held a tournament to crowd a new Light Heavyweight champion. Though it was finally a belt suited for a little man in a big man’s game, the 6-foot, 235-pound Maggs bowed out in the first round of the August 31st, 1991 tournament to Badstreet (a masked Brad Armstrong).

Joey Maggs (Joseph Magliano), was born September 29, 1967, and began wrestling in 1987 in Georgia, with Buck Robley’s Deep South Wrestling, which would become Southern Championship Wrestling. He’d work Mississippi and Louisiana before hitting his stride in Memphis, where he was USWA tag team champion with Rex King, and held the USWA Junior Heavyweight belt.

When he entered WCW in 1991, he understood his role.

“My first match at WCW was against Tom Zenk in Dothan, Alabama,” Maggs told a Tom Zenk tribute site. “Tom had a lot on his mind with upcoming TV and local matches and asked me to help him look good that night, so that’s what I did. I called the match, which is normal for the heel to do, and Tom followed.”

In WCW, he was known as “Jumping” Joey Maggs. “It was the booker’s idea because I tended to jump around in the ring a lot,” Maggs explained. He also formed a masked tag team with Johnny Rich called The Creatures, just in time for the Halloween Havoc Clash of the Champions special in 1991.

“It got to be a joke around the office about wearing black or white boots in the match, you know that ‘heel’ or ‘face’ thing,” Maggs said. “Doing jobs was my job and I did it. Sometimes I made more money jobbing than getting a push. I could take guys and even though I was putting them over I could have beat them and that pissed me off. A guy named J.T. Southern was so bad that I pulled a good match out of him. But the fact that nobody else could get a match out of him made me feel good.”

On the Old-School Wrestling message board, referee James Beard, shared his recollections of Maggs: I’ve worked with Joey as well. Solid worker and good guy from all I could tell. I guess we get a slightly different colored opinion of a guy’s working skills when we compare them to their contemporaries. Joey was good, solid when looking at it that way. Yet, if we put him up against what we see today, skill wise, he’s much better in comparison as many of guys like him from that era would be.”

“He was a good worker, and just nice to everybody. He never caused any trouble,” said Buddy Landel.