TORONTO — From an emotional fiance of Trish Stratus (sitting well off camera in the stands) to John Cena’s hug of his father after his victory, Unforgiven was proof that family still means a lot in the WWE.

Scores of kids and their parents were in attendance Sunday night at the pay-per-view at Toronto’s Air Canada Centre too. (No doubt, many of them went home with very age-appropriate t-shirts, like Carlito’s “Spit happens” and DX’s “Vince likes cocks.”) 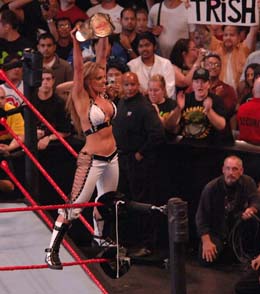 But from a hometown crowd’s perspective, there were only two matches that mattered.

Toronto diva Trish Stratus got a very good pop from the crowd when she came out for her women’s title match against Lita — announced as her retirement match, win or lose. The crowd was up and down during the competitive match itself, and roared when Stratus went to put on the Sharpshooter. (There had been a half-hearted “You screwed Bret” chant directed at Vince McMahon earlier.)

After Lita’s submission, Trish got plenty more cheers from the crowd as she showed off her seventh title belt. Like the model she was before wrestling, and the bride she is about to become, she knew enough to play to the hard cameras at ringside as well as the TV cameras. As they say, a little publicity can go a long way.

But it was Adam Copeland, aka Edge, from nearby Orangeville, Ontario, who really soaked in the crowd’s adulation. No attempt was made live to portray Edge as anything but the good guy in the bout. Even his long, royal blue wrestling pants harkened back to his days hearing the cheers of the crowd.

For John Cena, however, it was a different story. He was booed almost equally with the cheers he received. The mixed reaction could not compare to the solid mass behind his opponent in the Tables, Ladders and Chairs match for the WWE title.

The crowd at the ACC was up and down, like the Duke of York’s 10,000 men, during the thrilling TLC match.

Following his victory, Cena stood defiantly under the Unforgiven entranceway, no doubt resisting the urge to tell off his many detractors, some of whom had thrown debris at him. He held the belt aloft not once, but twice, as a type of “FU” to the crowd.

Having laid on the mat during Cena’s lengthy, Marine-like salute to the crowd, Edge finally got to his feet after his crash through two tables. There were medics on hand to help. He eventually shook off their help, and the crowd reacted with a hearty huzzah. As if he had won, Edge took to each side of the ring to salute the fans who cheered him.

At the entranceway, Edge also stopped to acknowledge the shower of adulation. It wasn’t the sly, cocky grin of the “Rated R Superstar” that beamed across his face, but rather a genuine, heart-felt smile, full of gratitude and humbleness.