At this year’s Unforgiven pay-per-view, held at the Air Canada Centre in Toronto, it was indeed pleasing to note that the home country was particularly well represented. Not only did The Highlanders (from Cambridge, Ontario) receive a shot at WWE Tag Team Champions The Spirit Squad, but Trish Stratus (Toronto) and Edge (Orangeville, Ontario) both appeared in high-profile matches, Stratus for the last time in the foreseeable future.

The star of the Women’s division is taking a well-earned break from her in-ring career to get married, and to pursue other performance ventures away from the squared circle. SLAM! Wrestling, of course, wishes her all the best.

Edge, on the other hand, had a Tables, Ladders, and Chairs date with John Cena for the WWE Championship, with the stipulation that if Cena did not capture the championship, that he would leave RAW to compete on Smackdown. 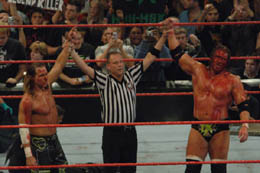 A bloody Shawn Michaels and Triple-H have their hands raised after victory in their Hell in a Cell match. – photo by Mike Mastrandrea

The show opened with the Intercontinental title match, which is clearly indicative of how the WWE thinks of its “secondary” championship these days. The newly-returned Hardy dominated the early going with a series of armdrags, and pulled an old trick out of the bag, running across the edge of the security wall to deliver a clothesline to the champion.

When he then went to the top rope to deliver further damage to Nitro inside the ring, the former MNM man kicked away his left knee, and Hardy took an awkward fall, bouncing against the ropes before thudding against the canvas. Nitro continued to work on the knee with kicks and elbows, but then missed a corkscrew moonsault, allowing Hardy to hit his own corkscrew attack.

Hardy then climbed the ropes and delivered the Swanton Bomb, the pinfall from which was only thwarted by Nitro’s foot being on the bottom rope. Soon after, Hardy knocked Nitro into Melina, who had appeared on the ring apron. Nitro then went to the top and was caught with a countering powerbomb as he leapt through the air, but with the referee checking on the condition of the champion, Melina struck Hardy with her shoe, allowing her charge to get the victory.

After a backstage segment with Lita and the Hardys – where Lita claimed that Edge would banish John Cena to Smackdown, just as he had done to Matt – it was time for the proposed “Battle of the Monsters.”

Umaga hit the first big move of the contest, striking with a reverse Russian legsweep on the floor, before following up with his running knee-strike in the corner, and a Samoan drop. He failed however, to hit a Samoan Spike from the second rope, and Kane soon ejected him from the ring with what can only be described as an attempt at a belly-to-belly suplex. “The Big Red Dummy” (the words of Armando Alejandro Estrada, not me) then dumped Umaga on the top of his head in clotheslining him over the barricade, and the two continued to brawl through the crowd as the referee counted both of them from the ring.

Tonight’s combination of the Spirit Squad — all five of whom are apparently tag team champions — was Mikey and Kenny, but that didn’t mean that the other members of the team were AWOL, as Johnny, Mitch and Nicky were all stationed at ringside.

The Highlanders began the match on top, striking with a series of headbutts, before Robbie missed an uncharacteristic middle-rope tope, and Mikey and Kenny combined to strike with a Hart Attack clothesline.

Rory made the hot tag after a missed top-rope legdrop from Kenny, and when he threw Kenny over the top rope and onto the other members of the Spirit Squad, it seemed that The Highlanders were on the verge of becoming champions. After hitting their slingshot reverse suplex, however, Kenny recovered to break up the pin attempt, and after Johnny interfered from the outside with an enziguri on Rory, Mikey used Rory’s beard to propel him face-first into the canvas for the victory.

Match #4 – Hell in a Cell: Vince McMahon, Shane McMahon and The Big Show vs D-X

D-X began by taking out Big Show with low blows, allowing them to open cuts on both McMahon family members by throwing them head-first into the steel. Triple-H then seemed to take great delight in raking Vince’s face against the wire, before using a screwdriver to further open the wound.

Big Show soon recovered to lacerate Michaels by throwing him into the cell, and Triple-H was also opened up when Shane dove across the ring to strike him with a Van Terminator.

The tables turned when Big Show inadvertently hit Vince with a splash, and Michaels took out Shane with a top-rope elbow drop, delivered as Shane’s neck was trapped between the back and seat of a steel chair. Triple-H then struck Big Show with two hard chair shots, and when Michaels nailed him with a superkick, Big Show was left teetering over the top rope. D-X then saw their opportunity, and made Vince kiss the Show’s bare butt, before Michaels hit Vince with a superkick, and Triple-H broke his sledgehammer over the head of the Chairman for the three-count.

As expected, Stratus got a fantastic reaction for what could prove to be her last ever WWE match. She dominated Lita early, striking with a Thesz press from the apron to the floor, and also hitting a headscissors as Lita stood on the ring steps.

Back in the ring, Lita managed to throw Stratus from the top rope, setting her up for the moonsault. She missed, however, but did counter Stratus’ attempt at Stratusfaction by throwing her to the outside.

Stratus soon regained the advantage by hitting another headscissors, before nailing Lita with the Chick Kick for a desperately near-fall. Going for the Stratusfaction again, it was blocked a second time, but Stratus herself countered and rolled Lita into a sunset flip. With the champion at her mercy, Stratus decided to break up the pin voluntarily, and to the absolute delight of the Air Canada Centre, locked Lita in the Sharpshooter for the submission victory.

Carlito evidently came into this match in an acrobatic mood, as early on in the match, he not only hit a nice dropkick, but also used the ropes to strike with a springboard somersault splash and an Asai moonsault.

Tasting his own blood from the impact of Carlito’s offence, Orton countered with a dropkick which sent Carlito from the apron to the floor, and also delivered a powerslam back in the ring. Orton then used a unique backbreaker variation, bending his opponent over his own back and dropping to his knees, but as he went for the RKO, Carlito hit the Back Cracker.

Trying to apply the finish, Carlito then went to the second rope, before jumping to the top and springboarding with an impressive twisting dive towards Orton, who caught him on the way with the RKO, resulting in the three count.

Edge was the clear crowd favourite in what is virtually his hometown, although when John Cena was introduced, there was a distinct mix of both cheers and boos. Edge decided to go for weapons early on, and having set up two chairs in the ring, drove Cena back-first into them, in what was a particularly painful-looking moment.

Edge continued the offence with a powerslam through a table, as well as a top-rope tope onto Cena, using the ladder to springboard from. But after he failed to score with a one-man Con-chair-to, Cena sandwiched Edge between the ladder and applied the STFU. Edge did tap, but in a match where pinfalls and submissions could not decide the contest, it meant nothing.

On the outside, Cena hit Edge with a chair, and climbed back into the ring in an attempt to reach the belt high above the ring. He was not banking on the presence of Lita, however, and she pushed the ladder down, sending Cena flying over the top rope and through a table on the outside. A similar fate was soon to befall Edge, though, as just when he thought he could snatch the belt, Cena re-entered the fray. Lita then struck Cena with a chair to the back, the momentum from which caused Cena to collide with the ladder, pushing Edge from it, over the top rope and through a table.

By the time that Edge recovered, Cena had thwarted the challenge of Lita by hitting her with the F-U, and had climbed the ladder to close in on the belt. Edge managed to reach the top of the ladder too, but as both men fought for control, Cena hooked Edge over his back, and in an insane move, dropped him through two tables with the F-U. With Edge incapacitated, he was able to take the belt, and capture the WWE championship.

Overall, Unforgiven was a card of averages, with nothing excellent and little poor. Still, much credit must be given in particular to Edge and John Cena for their incredible stunt-based bout, and also to Trish Stratus and Lita, who proved that when given time, several of the Divas are capable of composing a match to eclipse the men.

For now, at least, it is simply a shame that Stratus will not be around to participate in more matches of this quality, but if this truly is to be her last wrestling outing, she will have gone out on the very highest of high notes.