Topps has hit the wrestling card market once again, only this time they’re taking things backstage rather than out to the center of the ring.

Topps Insider, heralded as giving fans a different look at WWE’s best and brightest, does just that with some cool back-of-card facts, some of which are well known and others that will surprise even the most veteran wrestling viewer. 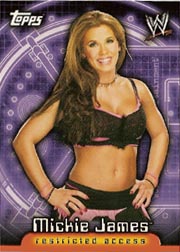 Without spoiling the entire set, here are just a few of the facts you can find:
– Carlito’s card reveals that his father, Carlos Colon, was a referee in the 1993 Royal Rumble.
– Chris Masters was trained by Ivan Putski.
– Stephanie McMahon discovered John Cena’s rapping ability while travelling to a show in Birmingham, UK.
– Lance Cade made his debut in 2003 against Lance Storm on Heat.
– Batista once tried out for WCW.

Of course, some wrestlers come with facts easier than others. Hulk Hogan, for example, being in the business for some 30-odd years, has a cornicopia of trivia; meanwhile, a newer talent like Mickie James doesn’t have the widespread credentials, or, as is her case, a history that WWE would necessarily want to talk about (before coming to the WWE system, James was a part of TNA and Ring of Honor, and rumour has it, posed in one of those girlie magazines). In that respect, Topps had a bit of a harder task ahead of them in composing the card backs, but came out looking pretty good.

The only complaint that I would have is that there are a couple bumps in the road that could have been fact-checked. For example, Steven Richards’ card, while noting his ECW days, skips over his (admittedly) short stint in WCW. In the case of the former Right To Censor-leader, it was a blink-and-you’ll-miss-it period, but a quick check with the wrestler would’ve confirmed it. 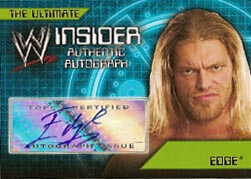 One thing to note about the trading card industry is that there is a long, long lead time from when a checklist is confirmed to when it goes out on the shelves. The process takes a few months, so it is expected that some roster changes will not be properly reflected. Insider, however, was pretty spot on with their roster, with only three superstars (Orlando Jordan, Road Warrior Animal and Goldust) in the set that weren’t on the WWE roster when the product was released, and only Kurt Angle has departed since (which no one, five or six months ago, would have seen coming). That efficiency is a sign of a well-thought out roster (save for odd inclusions like Michael Cole and Funaki).

On the insert side, WWE did a great job with the autograph cards as well as the design of the memorabilia pieces, which resemble press passes. Unfortunately, we’re still seeing event-worn shirts as opposed to definite match-used items like tights or boots. Heck, I think one of the best pieces would be to cut up one of Rey Mysterio’s hundreds of masks for the cards. As well, given that this is an “inside” look at WWE, an interesting twist would have been to create a variation on the autographs with the wrestlers signing with their real names — an Edge autograph is cool, but an Adam Copeland signature would be a neat little item as well.

Overall, Insider was a fun set not only to open, but to read as well; and anyone who is in the collecting game will know how frustrating it can be when there is little information on today’s cardbacks. Definite thumbs up to Topps here and I highly recommend getting a box, or even splitting one with a friend.

What you can get:

Base Set
2 complete base sets, 20 triples

Damage Report:
None to speak of.