The forgotten talent of Rick Gibson

Last week, the wrestling world lost Rick Gibson, the older brother of Robert Gibson of the Rock ‘n’ Roll Express. Perhaps not as well known as his brother, Ricky was nonetheless a big star in his own right, particularly in the Gulf Coast territory.

Rick Gibson (real name Rick Cain) was born in Pensacola, Florida, on November 19, 1952. His mother, Annie Cain, was a deaf mute. He went to Brownsville Junior High, but quit in the eighth grade. His father hauled the ring for Lee Fields’ Gulf Coast promotion. 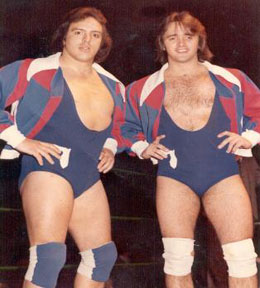 He got his first wrestling experience at the YMCA, and for three years, he lived with Lee Fields in Lafayette, Louisiana.

Rick got his start in the wrestling business by selling cokes and working the concession stand at the wrestling matches in Pensacola. He also sold pictures for Ken Lucas and some of the others wrestlers.

When he told Lee Fields that he wanted to wrestle, Lee took him into the ring and put his face into the mat. He later worked a bit as a referee.

In an interview conducted in 1999, Rick said his first match was at the arena on Strong and “P” Street in Montgomery in 1970. “When I was 17, my first match was in Montgomery, Alabama against Jackie Fargo. I broke my arm in that match,” he said. “Jerry Cobb, who was Lee Fields’ number one man, was the brains of the promotion.”

In an interview posted on Solie’s Vintage Wrestling, Les Thatcher talked about his role in starting out Rick Gibson. They were backstage, and Gibson was 12 or 13. Thatcher announced that he was throwing out an old pair of wrestling boots. Rick asked for them and was given them. Years later, in Atlanta in 1973, Rick went up to Thatcher again.

“I saw this young kid – nice looking athlete, he walks up to me and says, ‘Hi, Les.’ And I said, ‘Hi’, and I guess he could see in my face that I hadn’t any idea who he was, and he says, ‘You don’t remember me?’ I said. ‘No, I don’t think so…’ “Well, you gave me my first pair of wrestling boots!” recalled Thatcher. “Ricky was a tremendous young athlete, he got a real good push in Atlanta. A lot of great things could have come for Ricky — one thing though, he was kind of a free spirit, didn’t adhere to instructions well.”

When asked what his worst payoff was, Rick said, “I wrestled in Lucedale, Mississippi, for a piece of lemon pie and a glass of milk.”

The only time he ever worked under another name (besides Ricky or Rick Gibson) was in Atlanta. Even though he had wrestled there for years as Rick Gibson, Dusty Rhodes had him go to the ring as Ricky Lee Jones, which Gibson thought was a stupid idea.

Another example of a name change took place when Rick took his brother, Robert (born Ruben), to Kansas City in 1974, and they billed him as Robert Goldstein.

In Gulf Coast Championship Wrestling, Rick battled the likes of Ken Lucas, Billy Spears, Les Thatcher, Chief Thundercloud, Sputnik Monroe, Norvel Austin, and Jack Brisco. He also formed a successful team with Steve Keirn, who later worked as a part of the Fabulous Ones with Stan Lane. Other championship teams included runs with Jimmy Golden as the NWA Southeast tag champs in 1975 and again in 1978; with Tommy Gilbert as Tennessee Southern tag champs in 1974; and with Bobby Shane as Western States tag champs in Dean Silverstone’s promotion in Washington state.

Other regular feuds Rick had were with Jim Bass, Billy Spears and Jerry Lawler.

With his brother, Robert, Ricky would hold the NWA Americas tag titles in 1979, the Tennessee Southern tag belts and the (upgraded) CWA Memphis world tag team titles in 1981.

In the early 1980s, an automobile accident put an end to his wrestling career, and he spent 39 days in intensive care. “A girl hit me head on,” he said. “I have so much metal in me that I’m like the Bionic Man.” His last match was with Ric Flair in Rock Hill, South Carolina.

He would still help out with Jim Cornette’s Smokey Mountain Wrestling promotion in the early ’90s, usually as a second to the Rock ‘n’ Roll Express.

His son, William Gibson, got into the wrestling business as a referee, and runs a wrestling site. “I may be biased for obvious reasons, but had he not been in that accident, I believe Ricky would have went on to become one of the most famous veterans in the business, alongside Jerry Lawler and Ric Flair,” he wrote on his website.

Thatcher concurred in his Solie’s Vintage Wrestling interview, comparing the two brothers. “Robert’s good but, no disrespect to Robert, but I think Ricky is a notch or two above his brother — or would have been — but he had some injuries that slowed him down on occasion and then he was in a real nasty car wreck — and that was the end of it. Tremendous talent but his career was cut too short because of the car wreck and it was a real shame. He would have soared to tremendous heights because he was a great worker.”

On his website forum, Lance Russell also addressed the Gibson brothers. “There’s no question that Robert’s career was more extensive than Ricky but you might be surprised to know that you’re not alone in your assessment of Ricky’s talent. His abilities were well thought of by his peers and personally I thought he was excellent when doing interviews. Talking on television just seemed to come naturally to Ricky. Actually I do seem to remember that he was injured pretty badly and, yes, it did cut his career short.

An autopsy has been requested by the Gibson family to establish a cause of death on September 15, 2006. He lived in Milton, Florida at the time of his passing.

Survivors include his wife of 28-1/2 years, Terri, two daughters Stacy Perry and Tonya Davis of Milton, mother Annie Cain of Molino, one brother Ruben Cain of Pensacola, three sisters Carol Tucker and Wanda Turner of Pensacola and Ruby Collard of Tuscaloosa, AL, and five grandchildren. He was buried on Friday, September 21, 2006.

Scott Teal is the man behind the great Whatever Happened To … ? newsletters and Crowbar Press. Check out all his work at www.crowbarpress.com.