It doesn’t really matter what I say about the upcoming DVD, TNA Knockouts: The Ladies of TNA Wrestling Vol. 1. Fans that are likely to buy these kinds of DVDs will do so no matter what I think; and those who aren’t, won’t. 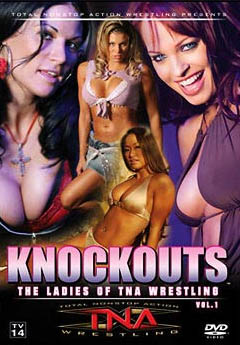 The interview segments, while short, are interesting enough. In them, the ladies give fans a brief glimpse into their childhood and family life, their entry into the sport, and some personal stories. Jackie, for example, discusses some problems she had with alcohol in the past, while Christy talks about her career leading up to the WWE Diva search that brought her into the industry. I also liked Gail’s piece which featured a trailer from an upcoming film she’s in, co-starring with Pat ‘Mr. Miyagi’ Morita and Lalaine, who played Miranda on Lizzie McGuire — um, not that I watch that show regularly or anything.

As the Knockout who’s been in TNA the longest, Traci gets an extended segment, presumably filmed before TNA moved to Orlando. In it, she is shown attending a AAA baseball game in Nashville. Her outgoing personality comes through as she flirts with players before the game, and entertains fans between innings. Plus, she earns a special place in my heart when she insists that the game won’t be complete without a jumbo beer.

Of course, the main event of the disc is the video shoots, featuring the Knockouts sexily posing in lingerie, bikinis, and various stages of undress. I would joke that I couldn’t see most of this because my glasses kept steaming up, but that would be lame.

The video of the shoot for Sole Collector magazine — which, as far as I can tell is geared to fans of shoes and cleavage — is particularly interesting. The solo shoots for each girl are equally sexy, but the cheesy music is too reminiscent of those late night 1-900 number commercials … um, not that I watch those shows regularly or anything.

The last feature on the DVD is a match between Traci and Gail. It’s a decent match, and really hits home the difference between the TNA Knockouts and many of the divas in WWE who look good but can’t wrestle. If there is one complaint about the DVD, it’s that they should have included more matches from all of the talented women. But that’s a minor complaint — and, like I said, it’s not really the reason most people who are going to buy the DVD would buy it for in any case.

Bottom line: overall, TNA Knockouts: The Ladies of TNA Wrestling Vol. 1 is a fun watch, and fans of the beauties won’t be disappointed.