Sitting Ringside for a lesson in history

By CRISTIAN LUPSA – For SLAM! Wrestling

To most fans of the pyro-infested, show-prone, diva-oriented-programs Vince McMahon and the WWE are putting together, the phrase “wrestling history” is code for the days when wrestling was king. The Joey Styles shoot style rant on RAW got fans all worked up and teary eyed for the days when “sports entertainment” was evil and the business was so much purer. 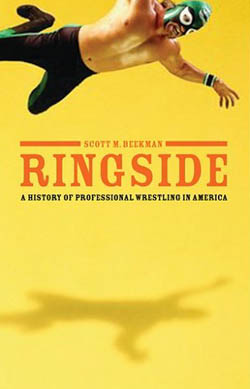 To fans it didn’t matter that the Styles quitting RAW segment was just another commercial ploy to sell a watered down version of ECW, a once truly alternative brand. It also didn’t matter that there is almost nothing resembling a true shoot in today’s wrestling. To fans fed up with the product, Styles was a rogue element in a promotion gone wild.

But if you run the Styles segment through the time machine Scott M. Beekman built in his book, Ringside: A History of Professional Wrestling in America (Praeger Publishers), you will notice how normal and in line with history it all was. What Beekman does in his 150-page book is stretch the history of wrestling to times before the 1970s and the rise of WWF. The book is not an exhaustive history — a feat hard to accomplish in a small book — but a great overview for those unfamiliar with the roots of the sport.The Ringside time machine sets roots in the ancient world and stops in the early 2000s with Vincent K. McMahon owning American wrestling. All the in between will both please and depress fans. The good news is that wrestling history is cyclical and when you look at the more than 150 years of American heritage, you’ll notice the McMahon era is only one moment — if an important one — on this continuum. This means it’s more than possible that the current form of wrestling will mutate. The bad news is that it’s not necessarily going to get better and it’s not going to return entirely to a previous form.

“Wrestling is seemingly indestructible, but it does go through periodic lean times (such as now),” Beekman wrote in an e-mail exchange with SLAM! Wrestling. “That may sound negative, but it should not be construed as pessimism. Wrestling will, I’m sure, again hit a peak such as the ’50s or ’80s. That’s one of the things that makes wrestling great — its ability to reinvent itself for a new generation. I think the next peak may very well be something of a return to an older style, ’80s style WWF, but with the hardcore match elements, might be the way. I truly believe that there’s an audience out there that would love to get their kids into following wrestling but they are uncomfortable with the adult (I’d actually call it ‘juvenile’) aspects of Vince’s promotion.”

Beekman’s book points out that every new development in the business — from the use of worked matches, to the development of gimmicks, to the rise of television programming — took wrestling farther away from its sporting roots. And most of these developments happened because the crowds craved an evolving form of entertainment. How many of us would watch 1916 greats Joe Stecher and Ed “Strangler” Lewis grapple for five hours to a draw using an arsenal of ground moves? Not the highest draw.

Still, many fans would be well served to know why there are no more five-hour shoot matches today.That’s where Beekman and his book are at their best. An assistant history professor at Ohio University, Beekman is also a life-long wrestling fan, who moonlighted as a ringside announcer and, in his greatest moment, appeared as a heel manager for a few independent promotions in the late 1990s. In a nutshell, Ringside is a book of cultural history of the scholarly kind, written by a man who knows his wrestling.

While researching the book, Beekman was surprised to find that a sport going back 150 years in the United States did not have a scholarly history and set out to fill that void — fully conscious of the stigma that comes from doing this kind of work in a field shunned by many in the academic and journalistic communities. Ringside is optimistically Beekman’s attempt to provide wrestling with “the basic cloak of respectability granted through possessing a written history” and is hopeful his study might help “return pro wrestling to its rightful place in discussions of the development of sporting culture in the United States.”

Ringside reads like play-by-play of a man solving a complicated historical puzzle. After a brief discussion of wrestling’s role in ancient times, Beekman introduces readers to the early forms of American grappling, both home grown and imported by immigrants. These styles competed with each other for supremacy and the eventual winner was the “catch as catch can” style, which later gave birth to modern wrestling.This style proved its superiority largely because it sold better — it was more dynamic, less restrictive and far more aggressive that the other styles, Greco-Roman among them. At the end of the 19th century, wrestling matches were not predetermined contests and there was little of the character building of today. This added to the sport’s legitimacy, but sometimes detracted from the spectacle as bouts would go on forever and dominant champions would reign for extended periods of time.

As team sports began to grow in the early twentieth century, wrestling started to change to remain profitable, ushering in the World War I/1920s period, which Beekman says was the watershed mark.

“Can one pinpoint an exact moment or date within that period? Probably not,” Beekman said. “But it was that era that witnessed the ascendance of the promoters. That really changed everything. Most importantly, it allowed for worked matches to become the standard within the business. One should keep in mind that this did not happen in a vacuum. Boxing, although it did not become worked [but was often fixed], went through a similar transformation during this period.”

The worked matches and the ascendance of promoters happened for financial reasons and fans were kept in the dark so they would keep shelling out the cash — the term “mark” was used to describe fools who had not yet figured it all out. Journalists also largely moved away from covering wrestling at that point. Beekman eloquently summarizes the period in his chapter “The art of deception”: “[The] promoters based their business on falsely presenting a rehearsed form of entertainment as an authentic sport to an audience they considered gullible and contemptuous.”

The early period constitutes the bulk of Beekman’s book. He then moves on to chronicle the rise of the territories, the dominance of promoters, the relationship between TV and wrestling, the appearance of the National Wrestling Alliance (NWA) and the American Wrestling Association (AWA) before going into the emergence of the WWWF (the later WWF), the boom of the 1980s, the emergence of WCW, the Monday Night Wars and it all comes to a close when Vince K. McMahon completes his purchase of WCW and ECW.Ringside is not a book for fans who seek an indictment of modern wrestling. It’s not a character study and it offers little insight about the men and women in the ring today. It tells us nothing new about Vince McMahon and it’s written with very little of the pageantry that characterizes the business. But it’s spot on as the brief cultural history it intends to be. This is a history book and wrestling, not wrestlers, is the main focus. Ringside is the context many fans lack for watching wrestling and reading it makes so much of what we see today make sense. Did you ever wonder how fans know that a foreign-born character has to be booed although he never opened his mouth? Why is Madison Square Garden so important to wrestling? How did the lingo develop? Why is the South so wrestling-mad? Who came up with gimmicks? Why did Mick Foley challenge Ric Flair to a pure wrestling match that would be the best of three falls? What has television meant to wrestling? Why does the WWE use house lights and what does it mean that the old ECW didn’t?

Ringside pieces all these elements together and if you’re a wrestling nerd that doesn’t mind sometimes slow-paced writing about the champions of old, this book is a winner. The most obvious question you’re left with at the end of the book is: What now?

Using history as a guide, what’s in store for wrestling? Beekman ventured a prediction:”McMahon has the sport sown up so tightly right now that only a heavily-funded, network-backed promotion has any chance against him,” Beekman wrote. “And I don’t think TNA is going to be that promotion. WWE product really does nothing for me. I don’t like the sexism, vulgarity, or slow-moving muscleheads that Vince promotes. The tectonic shifts in wrestling have all occurred thanks to technological developments, which means that something might come about to topple Vince, which (in my opinion) would be cause for celebration. The Internet seems the logical choice for this change (…) Could a web-based promotion also succeed? Maybe down the line. The ability to reach fans without a TV deal is an interesting concept. The problem, of course, is how to make money off a internet-oriented fed. I doubt PPV revenue would really keep someone afloat, but I suppose the chance is there.”

The chance is definitely there. Because if the history of wrestling tells us anything it’s that this business will never stop changing.

CRISTIAN LUPSA is Romanian and grew up watching wrestling on German cable channels. He was outraged when Mr. Fuji screwed Bret Hart at Wrestlemania IX and always thought Sting had more appeal when he was a bleached beach bum. Now he is scheming ways to get more wrestling coverage into mainstream media. Email him at [email protected]