During a recent trip through Toronto, WWE diva Torrie Wilson was forced to leave a good friend behind. No, not her husband Billy Kidman. Her dog, Chloe.

“Actually, we had a hard time getting through customs, and she had a very rough week on the road, last week. She was really tired. So I let her have the day off,” Wilson said with a chuckle during the red carpet portion of The Score’s announcement that it had landed Monday Night Raw. 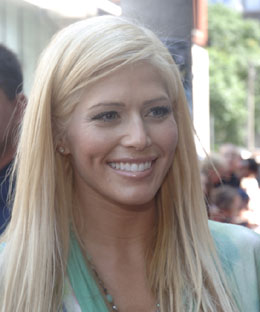 Torrie Wilson on the red carpet. Photo by Mike Mastrandrea

Behind Wilson on the red carpet, fans broke into a spontaneous chant of “Chloe.” Torrie said that was the first time her diminutive Maltese ever got a chant.

Now 31 years old, Wilson has been watching the latest Diva Search competition with interest, but isn’t worried about her position with the company.

“I don’t really feel pressure. I’m confident in who I am, and I really feel that there’s nobody out there that is exactly like me,” she said. “The only pressure that I really feel, and I think all of us divas feel, they all come in and they’re this skinny, and we travel all the time so we’re trying to starve ourselves.”

“Actually, they try to keep us apart from them. They probably don’t want us giving them too much advice,” Wilson said. “I think they want to see it all fresh, and what they come up with as far as what they do on the show. If they ask me for advice, I give it to them, but nobody’s asked me so far.”

But what would her advice be?

“My advice is just to be true to yourself,” she said. “Sometimes I think people try a little too hard to be that rocker chick, or whatever they think that the wrestling fans want to see. The fans can see right through that stuff.”

While on the podium, “The Nature Boy” Ric Flair had some fun at Torrie’s expense, who was sitting to his right.

“I have done everything there is to do in Toronto and Niagara Falls, except go over the Falls in a barrel. And if I get Torrie drunk enough, that’ll happen!” joked Flair.

He turned a little more serious a short while later. “I’m very honoured to be up here with a great gal named Torrie, who is in a class of her own. She’s been a distinguished Diva, she’s been a fitness competition champion, she’s achieved all that there is to achieve. She’s a beautiful, beautiful woman.”

Wilson is on the cover of the September issue of FHM magazine, with an eight-page photo spread inside. Is another appearance in Playboy magazine in the works for Torrie? “Hopefully. Every time I’ve done it, I’ve had an awesome time. They were great to work with,” she said.

No doubt sales will be helped by Mr. Flair, who quipped that he bought “26 issues each time” of her Playboy appearances.

This is the first time that SLAM! Wrestling producer Greg Oliver has met Torrie Wilson. He’s disappointed that Torrie seemed more taken with Dan “The Mouth” Lovranski of The LAW than himself. Condolences can be sent to [email protected]