DETROIT – It is always hard to be World champion. But what if you had a second job as well? That is what King Booker is trying to juggle, as he is not only WWE World Champion but also helps run a wrestling school bearing his name.

At Tuesday’s Wrestlemania 23 Press Conference at Detroit’s Ford Field, Booker T’s eyes lit up when asked about his wrestling school. 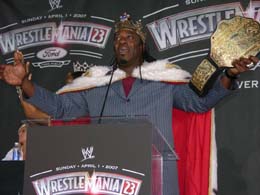 The school — Booker T and Stevie Ray Wrestling Academy — is based out of Houston. The school is mainly run by Booker’s former tag partner and brother, Stevie Ray. But Booker takes a lot of pride in his participation with the school.

“We have 21 students now,” Booker said about the success of the school.

The course, costing $3,500 per student, lasts six months. They learn not only what to do in the ring but ring psychology, interview skills and about the business. And they are learning from one of the top in the sport.

Booker might be the teacher, but he is also learning new things himself. “It’s not only helping the students, but it’s helping me. Working with these students is keeping me sharp.”

He shows that he is more involved than just name. He helps set-up the ring and sweep the warehouse where training is held. He mentions that he will never be too big to sweep the floor.

The wrestling school opened in February 2005. It has been a great opportunity for potential students because of Booker’s employment with the WWE. WWE officials have helped tryouts at the school on two occasions. The last tryout, saw hundreds apply but only 12 were chosen to wrestle in front of WWE officials Tony Garea and Sgt. Slaughter.

The school has gained a lot of attention with the wrestlers with the WWE. Charlie Haas has told Booker that he plans on helping Booker train the students in the near future.

Booker’s love for the wrestling business is shown at the school. He loved his training back in Houston over 15 years ago. And why not, he was trained by wrestler Scott Casey.

After answering questions about his school, questions turned to his career. Years ago, Booker mentioned that he expected to retire before the age of 35.

“This isn’t something that’s going to last forever,” he told reporter Mike Mooneyham in 2003. “It’s a short-term thing and I just happen to be passing through at this time and having fun with it. It’s not something that I take very seriously because I do think I have a higher destiny in life than professional wrestling.”

“Still being the best, still being able to wrestle at the highest level and no short changing the fans is what changed.

“But I have achieved everything I needed to achieve. I have been at the top. I have won most major titles.”

With the success of the wrestling school, it could make Booker’s future easy.

“The final chapter in my career was to win the World title.”