Patience pays off with Paparazzi Productions

A lot can be said for patience. But if you don’t have it to begin with the last thing you ever want to hear is the words “be patient.”

I, like may of you I am sure, am in the no patience group and have trouble waiting for street lights let alone the things we work our whole lives to achieve. But I have to tell you there is nothing sweeter than the smell and feel of success. And as far as I am concerned, I both smelling and tasting it (success) right now. 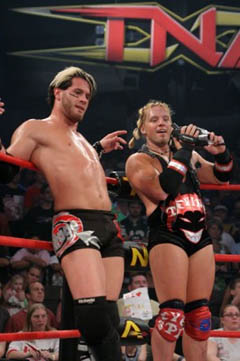 I am part of Paparazzi Productions in TNA along with the ridiculously talented “The Next” @LX Shelly and the funniest man on the planet, Kevin Nash. And I couldn’t be happier.

All modesty aside, I am part of the hottest angle/group in pro wrestling and am taking full advantage. I learn new ways to do things outside the ring weekly from the incredible mind of Kevin Nash, and inside the ring there isn’t a more learned student of mat wrestling than Alex Shelley, so each week I just keep getting better. And for those of you who know me personally, that’s a pretty hard thing to do!

In the upcoming weeks, things are only going to get better and better too, and I am still a little in awe of how great things are going.

A year ago I was five and a bit months out of getting major surgery to reattach my MCL and ACL on my right knee. I was almost one year out from getting my life almost cut short by some douche in Nashville who needed a knife to try to stop me and Andy Douglas from beating him and his three buddies like they owed us money. Flash ahead a year and another major surgery on my stomach later and I am on top of the world.

The Hard Justice pay-per-view is on August 13th and it will be a banner night for Paparazzi Productions. Big Kev is going to give Chris Sabin the X Division wrestling lesson of a lifetime and win a shot at Senshi and the X Division Title. And Alex and I have a few surprises up our sleeves for the rest of the X Division.

Speaking of which, if you follow the X Division, you got to see on Impact last week, in a four-way between myself, Shark Boy, Sonjay Dutt and my former Team Canada OG Petey Williams. That is the first time Petey and I have met in a match against each other in over three years. I have always said Petey was very talented and one heck of a representative of the Canadian people. And he continues to be just that. But I also want to say what a tough SOB Sonjay Dutt is. In the last month I don’t think I have ever seen someone take so many beatings in my life and still keep coming. If you didn’t see Victory Road I would recommend it on the lawn dart that was Sonjay Dutt alone. Damn, Hernandez is freaky strong. But I digress. I don’t think Sonjay gets his due as a tough SOB and great wrestler. I just wish he had some better dance moves as the sprinkler is so three years ago.

Speaking of Senshi. Here’s a guy I have a lot of respect for, not just in the ring, but in the way he handles himself outside it as well. The warrior’s way is a hard life. It takes discipline and self awareness at levels that are near impossible for people nowadays to achieve. Senshi is one heck of an X Division champion and will have a long and successful run. Well, until Alex or myself decide we’ve had enough fun embarrassing Chris Sabin and want to take the title.

It was a major disappointment to see Jim Cornette break up my old tribe of Team Canada. I never thought the day would come. I am sure all the guys will do great on their own, but have to question Eric Young and his direction of turning to the fans for support. Wrestling fans as a whole are known to be fickle and capricious at best. How can he rely on them in his secret plans for support when they could turn on him at a moment’s notice? I don’t think it’s a very wise move on his part, and will extend the friendship olive branch to him from PP — but then again Showtime has never been the sharpest of marbles.

As always I look forward to any feedback or questions you may have, and will do my best to get back to any questions with a lick of intelligence; i.e. I don’t want any “U RAWK DUD”s or “Whats Kevin Nash like?” Those will go in the “Make sure to punch in the face if I ever meet this person” File.

In the mean time and in between time, that’s it. Another edition of Devine Intervention.