Rally gets Detroit ready for WrestleMania 23

DETROIT — Though WrestleMania 23 is approximately eight months away, WWE held a press conference and fan rally Tuesday at the event’s venue, Ford Field in Detroit to get fans revved up for the company’s premier annual extravaganza.

A plethora of local and Canadian media was on hand and upwards of 1,000 fans made the trek to the home of the NFL’s Detroit Lions. Several WWE and ECW superstars were also on hand to not only talk about WrestleMania, but to discuss other noteworthy topics. 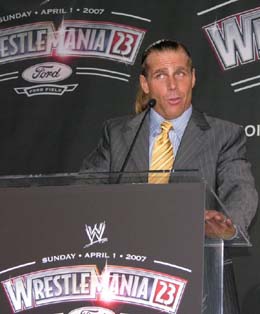 “Mean” Gene Okerlund hosted the event and said afterwards that after the spectacle that was WrestleMania III at the Pontiac Silverdome, he knew it was only a matter of time before the show made its way back to Detroit.

“I didn’t know 20 years ago if I’d even be alive in 20 years,” Okerlund told the media during a post-press conference scrum. “It’ll be exciting to come back here; this is the big time. I wouldn’t miss it for the world.”

WrestleMania III, held in front of a now-contested 93,173 fans back on March 29, 1987, in the northern Detroit suburb, will not be outdone attendance-wise by WrestleMania 23, but all signs point to a crowd in excess of 78,000 next April. (The true number of fans at WMIII is said to be closer to 70,000.)

Tom Lewand, the Detroit Lions and Ford Field executive vice president and chief operating officer, spoke at the rally and was in awe at the turnout.

“We could announce we’re having the next five Super Bowls and we wouldn’t get a crowd like we have today,” said Lewand. “This is unbelievable.”

Other local dignitaries that spoke briefly were Detroit Metro Convention and Visitors Bureau executive vice president and chief operating officer Michael O’Callaghan and City of Detroit chief administrative officer Lucius Vassar. The latter put on a pair of sunglasses and hollered at the crowd in WWE babyface form.

During the past few months, representatives from WWE have been in town to establish relationships with Ford Field executives, the city of Detroit and border town Windsor, Ontario, and many community and charitable organizations.

WrestleMania 23 will be the eighth pay-per-view to emanate from the Motor City and the first since the Survivor Series last November at Joe Louis Arena.

Shawn Michaels, Rey Mysterio Jr., Batista, Edge, The Big Show, Kelly Kelly (who attempted to get freaky with Mean Gene), Randy Orton, King Booker and Queen Sharmell and John Cena made appearances at the presser. Paul Heyman was advertised, but was a no-show. 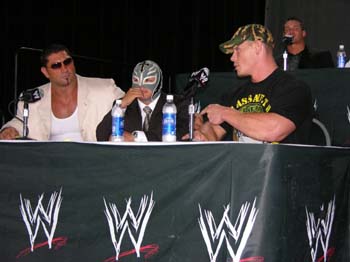 Orton also stole a few glances toward Kelly on stage as the two were seated next to each other. Big Show and Edge sat side-by-side and engaged in friendly chatter, as did Batista and Mysterio.

Batista, a man of few words both on and off camera, in a funny spot, simply muttered the words “John Cena” and got a crowd response, most of which were boos. He did this several times.

Michaels also rambled on about how come WrestleMania, many of the wrestlers get out their best suits, except for Cena, who busts out his diamond-encrusted bling.

“WrestleMania is where we go out and show off,” Michaels said. “We have a genuine group of guys in that locker room that trust each other. Every year at WrestleMania, we want to go out there and tear the house down. We enjoy the screams from the fans and that’s a big reason who we are as performers. WrestleMania is a chance to show the world that we’re the best.”

All the wrestlers stayed in character for the most part and all were introduced with their theme music and entrance video. And yes, Sharmell even started the “All hail King Booker” chant.

Edge talked after the press conference about his distant past in the business and maybe a hint for his WrestleMania 23 opponent.

“I cut my teeth here in the early years in Insane Championship Wrestling with Malcolm Monroe and had some very brutal matches,” Edge said. “I was in a team called Sex & Violence, which I now have on my T-shirts. They didn’t copyright it! But Detroit was my starting point and definitely is a special place for me.”

And as for who the Rated R Superstar will battle next April?

“I’m undefeated at WrestleMania,” said Edge. “And I can think of one other guy who is also undefeated.”

Hmmm … can we say Undertaker?

Michaels, who had a crazed fan yell out “Montreal Screwjob” at one point, was in usual form after the fan portion of the day. When asked by a local TV reporter what DX means, Michaels responded with, “DX means D … Generation … X. Next question.”

Edge was asked about a possible second confrontation with Detroit Tigers’ DH Dmitri Young. The two had a short program at last year’s Survivor Series. Edge’s response: “Dmitri Young? The fat guy on first base with the braids?” Edge then went on his typical rant on Detroit sports teams and how they all choke, or in the Tigers’ case, will be choking in due time.

All in all, at the end of the day, WWE gave the fans of Detroit a free preview of WrestleMania 23 and by the turnout, it doesn’t appear Ford Field will have too many empty seats come next spring.