Any SLAM! Wrestling writer will tell you that the most frustrating wrestling interview is one in which the subject refuses to break kayfabe — they insist on doing the interview in character, and won’t open up and reveal what they really think. When interviewing the CZW faction, the BLK Out, that wasn’t even a remote possibility.

Indeed, as soon as the tape started rolling before a recent CZW show in Philadelphia’s famed ECW arena, the foursome — comprised of Ruckus, Joker, Sabian and Eddie Kingston — who will be appearing at this Friday’s UWA Hardcore Wrestling show in Mississauga, started shooting on a multitude of topics, including CZW and its fans, the wrestling industry in general, and the BLK Out’s role, present and future, in both. (The challenge, as a writer, is cleaning up the language.)

The team formed a couple of years ago at a time when none of them had any other major storylines going on. The four met and clicked, started developing the BLK Out concept, and through a combination of timing, luck, and opportunity, formed something that was greater than the sum of its parts.

As Ruckus explained, “(CZW owner John Zandig) gave us the opportunity, and gave us a lot of creative control, and we ran with it. We took four people who fans didn’t really care about at all, put our own personalities into it, and now we’re the top thing in this company.”

Kingston shared his theory as to why the gimmick became so successful: “We’re not fake. When you see us in the ring, that’s exactly what we’re like outside of the ring, 24 hours of the day. We’re real, so people relate to us.”

“(During my entrance),” said Sabian, “I feel up the girls in the crowd. Ruckus comes out smoking weed. It’s not politically correct, but it’s (stuff) that fans want to be able to do themselves. They sit in the audience thinking how come they can’t do that and get away with it. We do it, and they relate.”

Even in the context of a wrestling show, those types of actions are shocking. But shock value is something that CZW is known for delivering, particularly through its infamous ultra-violent death matches. Being associated with a company with that kind of reputation, the four agree, has both its pros and cons.

“Don’t get me wrong,” said Joker, “we love CZW. We’re here and we just want to help it. But sometimes we hate it, and sometimes we hate the fans. The Philly crowds have gotten too spoiled. They can’t appreciate things anymore. Here, they want to see blood. They want to see broken bones. Someone jumping off the (freaking) roof and break their (frigging) back. They don’t care, here, about the wrestlers. There are a lot of guys here,” he said, illustrating his point, “like Necro Butcher and Zandig who have broken their bodies for these people, and they’re still not getting appreciated.”

What’s worse, they note, is that there seems to be no way to try to change the thinking of the fans, to teach them to appreciate the less hardcore elements of the art.

“If CZW were to start changing things,” speculated Kingston, “and started adding (traditional mat-based) wrestling, started adding moves (and reducing the violence), I guarantee that the fans would start (dumping) all over it. These (people) don’t appreciate how hard it is to do what we do, they just don’t care.” 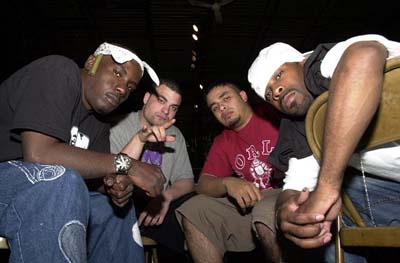 “People don’t understand the hours on the road,” he added, “the commitment (wrestlers) make. A lot of the time, when you’re first starting out, paying your dues means you don’t get paid. But we go out there for the love and passion of professional wrestling. And these people don’t get it.”

“All we ask,” said Ruckus, “is that people show us some respect. We come here every month, and work every weekend, driving nine or fourteen hours to go someplace to wrestle. Appreciate what we do.”

It’s appreciated by other fans, they say, like those of Ring of Honor, who traditionally eschew violent matches in favour of more scientific fare. But even though the BLK Out members say they could do put on those types of matches, they find it unlikely they’ll ever get the chance. Mainly because their association with CZW has pigeon-hold them in the eyes off other promoters and other fans.

“If we were to leave CZW,” Ruckus surmised, “I swear that we’d get more bookings somewhere else. It’s like the in thing for people to talk (bad) about CZW. We can put on a really good match with just about anyone. We could put on a match, move for move, that people loved seeing in another company. But if we did it in CZW, people would (criticize) it, just because it’s CZW. Take me, for example. Someone who doesn’t know who I am hears on the internet that I’m in CZW so I must be just a ‘spot-monkey’. That (messes) it up for me when some other booker reads that, and won’t even give me a shot, even though they’ve never seen me. But I can work with a lot of the ROH guys, and I’d love the chance to work with them. But because I’m with CZW, I can’t even get a break.”

Sabian described the double-standard thusly: “It’s (bogus). They have to look beyond the CZW name, and see what we can do in the ring.”

Not being to get out and wrestle in front of other crowds is especially frustrating to the quartet, since they’re so passionate about their craft.

“We appreciate the art of the sport,” Kingston said. “We all study wrestling. We watch the greats, we study what they do. (The legends and veterans of wrestling) know that it’s not just about taking a chair shot and bleeding all over, (but rather) it’s about story-telling. It’s an art form, and a lot of the other guys don’t appreciate that. Guys like Dick Murdoch, Dick Slater, Ric Flair, Dusty Rhodes … if they came to a lot of the independent shows today, they would ask themselves what happened to the sport that they busted their asses for.”

Continued Joker, “In ECW, you had guys like Rob Van Dam and Sabu who were breaking tables, yes, but the way they did it, it told a story. Everything they did had meaning to it. Nowadays, you have guys here that try to mimic that, but they can’t. They hit you with 25 chair shots and there’s still ten minutes left to go in the match. It’s great that you can do a 720-splash, but don’t (go and) do it at the beginning of the match. Guys today don’t get that.”

It’s that mentality that sets the BLK Out apart from other wrestlers, they say. Canadian fans will get a chance to see whether that’s indeed the case, when the faction comes back to UWA Hardcore Wrestling later this week.

“We love coming up to Canada,” said Kingston. “Just the other month, I finally got my opportunity to wrestle in Canada. I hadn’t been that nervous in a long time. I was really worried in the back that people wouldn’t know who I am. When I came out, the fans blew me away.”

Sabian added his praises to the company and to Canadian fans in general. “UWA is great. We always look forward to their shows, they take care of us really well. Plus, the fans are great in Canada — they get our (stuff), they appreciate what we do. It’s always a good time.”

And if they have any say in the matter, the BLK Out will continue having these good times, in their way, and on their terms.

“We won’t let anybody break us up,” promised Joker. “Where-ever we go, we’ll always go as part of BLK Out. It’s our goal to make BLK Out the longest-running clique in the independents. We all get along so well — even before we formed BLK Out — and we’re going to keep that going.”

“Bloodthirsty” Bob Kapur wishes he would have had a video camera when he interviewed the BLK Out, so he could have recorded a full shoot video. Anyone who wants to lend him one for the next time can e-mail him at [email protected].