Long before her son and grandson laced up their first pair of boots, the late Christine “Teeny” Jarrett was becoming a pioneer in professional wrestling.

SLAM! Wrestling recently caught up with both her son (Jerry Jarrett) and grandson (Jeff Jarrett) to discuss the matriarch of their family. 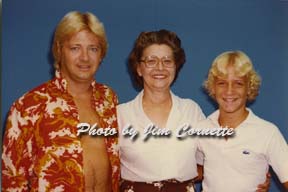 “My mother and father divorced in 1945. I was three years old, and my sister was about six months old. My mother, Teeny, was already working at Woolworth’s 5&10 in downtown Nashville,” recalled Jerry Jarrett. “We were living with my grandparents because my father was in the Army. Prior to the divorce, my father was sending money home. While it was a meager standard of living, we were surviving. After the divorce, my father never sent one dollar. So in desperation, Teeny had to find another job. She went to work selling tickets for the Gulas-Welch wrestling matches held at the Hippodrome in Nashville.

“She later took a full-time job selling tickets during the week for the wrestling matches at Jarman’s shoes store,” continued Jarrett. “I’m not sure of the exact date, but sometime in the late ’40s or early ’50s she moved into their office in the Maxwell House Hotel, which at the time was on Church Street. She loved her job and as little it paid, it was a big promotion from her ticket selling job and her clerk job at Woolworth’s. I remember that she was making $26.00 per week in 1964 when I went to work full time at the wrestling office. One day she showed me her First American Bank savings book. It was filled, page after page, with 50 cent deposits. On her meager salary and the financial pressure she was under; she had managed to save 50 cents per week since the day she began her job with Gulas and Welch.”

“She literally came from a very poor upbringing and broke out of that mold,” added Jeff Jarrett. “She was one of five kids and helped all of her siblings. Honestly, she was a real trendsetter and groundbreaker for our family.”

Jerry Jarrett also recalled how compassionate his mother was when it came to family.

“Teeny took care of my invalid aunt. Teeny bought a house across the street from her, so she could take her meals and see to her needs. You might say that Teeny’s hobby was looking after the needs of a great many of our family members. She saw not only to their material needs, but she was ‘mother’ to my aunts, uncles and cousins.”

She moved up the ranks while working for Gulas and Welch. In the early 1970s, she ran shows for the promotion in Louisville, Kentucky; Lexington, Kentucky; and Evansville, Indiana. With the addition of these towns, the territory continued to grow. Prior to the expansion into Kentucky and Indiana, she had been able to witness her son debut in ring as a professional wrestler in the late 1960s.

“During my days as a wrestler, she would get as nervous watching my matches as if they were a shoot,” recalled Jerry Jarrett. “Teeny was very old school and would come down really hard on the wrestlers if she caught one of them breaking kayfabe. The wrestlers feared her wrath and many times they would say to me, ‘Damn Jerry, how did you survive under her roof as a child?’ I’d answer, ‘I didn’t get out of line often.’ The truth was Teeny never one time gave me a spanking as a child. Her little talks were quite enough. Teeny had what I call presence. It was if she could look through you, and this is what the wrestlers hated when she would correct them.

“She was the angel of encouragement in whatever I was trying to do,” continued Jarrett. “Teeny gave the same encouragement to my ability at a game of marbles as she did when I bought the wrestling business from Roy Welch and later from Nick Gulas. She was a great believer in positive reinforcement. She would always say, ‘Jerry, God has blessed you with a good mind, and I’m sure you can do anything that you set your mind to.’ If I got distracted from any project as a child or as an adult, she would use positive reinforcement as a tool to get me back on track instead of a negative butt chewing or punishment. I can remember wishing for a spanking instead of a talk. Her talks always made me feel so guilty from letting her down. As an adult, I saw the wisdom in her style and tried to do the same with my children.”

Christine Jarrett would remain involved in the wrestling business in various roles for many years to arguably become the longest running female associated with a professional wrestling promotion. When her son opened up his own promotion in 1977, she became his partner. She also continued to nurture some of the cities she and Jerry opened up for Gulas and Welch, particularly Louisville, Lexington and Evansville. She also worked for years on Saturday nights at the box office at the weekly Nashville card. Her wrestling career truly came full circle.

“Honestly, there’s no one I really respect more because of what she accomplished in the business at the time she did it,” said Jeff Jarrett. “That covers quite a bit of ground. On the surface, she made it in a man’s world when it was really a man’s world. Everyone she worked for and everybody that worked for her respected her. Over the years, I’ve heard some marvelous stories about guys that would come through this area that didn’t particularly care for her at the time. As the years went by, they respected her so much for what she tried to get them to do and accomplish. She generally cared for the guys as people. She wanted them to save their money. Back in that day, it was much more cash business than it is now. She really set up savings plans and accounts for guys.”

In 1995, Louisville’s A Night to Remember card honored Christine Jarrett, a long-time unsung hero for the promotion and a major reason wrestling flourished over the years in Louisville and in the territory. In November 1998, she passed away at the age of 75.

Jeff Jarrett, Executive Vice President of TNA Entertainment, LLC, would go on to follow the footsteps of both his grandmother and father when he co-founded NWA-TNA in 2002.

According to his father, Jerry, “Teeny was a bit reserved in her excitement about Jeff being in the wrestling business because his only involvement while she was alive was as a wrestler. Of course she knew that the wrestling business has a short shelf life for wrestlers, and she was concerned that Jeff had no interest in the promotion end of the business.”

When asked what his grandmother would think of TNA, Jeff Jarrett answered: “She was a hard-charging, hard-driving woman. She’d always say we could do better. She was also so proud of my dad and his accomplishments. I know she would get real nervous when he would wrestle, and she would get real nervous when I would wrestle. She was a worrywart at times, but I think that went with her caring nature. I think she would be very pleased and proud.”

Both Jerry and Jeff expounded upon the advice and wisdom she bestowed to them.

“My mother had a huge bag full of wisdom,” recalled Jerry Jarrett. “She would say things such as, ‘God has blessed you with a good mind, please don’t waste it; you can accomplish anything you set your mind to; treat people the way you want to be treated.'”

“Obviously, save your money because it won’t last forever,” chuckled Jeff Jarrett. “Coming up third generation in this business, you really have to know who your fan base is and who your paying customers are. Back in those days, it was knowing who came to the shows and bought souvenir pictures. Today, I can translate that into who is the fan base that buys the pay per views, watches the television shows and buys the video games, dolls and DVDs. Above anything, she said learn your trade. If you’re going to be a carpenter, electrician or lawyer; learn it better than anybody. If you work harder than anybody, you’re guaranteed success.

“I’ve tried to prepare myself for the road ahead of me,” continued the former NWA World Champion. “She’s instilled in our family such a strong work ethic. If you out work everybody – literally putting in the man hours and necessary efforts — that will put you so far in front of the pack. It reminds me of the old adage ‘luck is when preparation meets opportunity.’ There really aren’t a lot of lucky people. It’s people that work hard and have the opportunity to present it. If there wasn’t a Christine Jarrett, there would be no Jeff Jarrett in the wrestling business.” 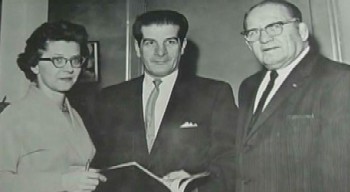 Christine Jarrett will be remembered as an innovator far ahead of her time that the wrestling business is just now catching up to.

“She instilled the principles and values that still work today,” added Jeff Jarrett. “Work hard and you will reap the fruits of your labor. You’ve got to be patient and continue to learn your craft. With the wrestling business today, everybody thinks they can do it. People also think it’s easy to become a wrestler and a promoter. If she was alive today and was to walk into a dressing room, I know she would tell the guys to learn every aspect of this business. You may never have to run a camera or promote a show but try to learn about it. It gives you different perspectives on just how this business is indeed a business. It’s not always glamorous. That’s the wisdom she passed on to me, and I think that’s exactly what she would try to pass on today.

“Her legacy will be that she treated this wrestling business like a business,” continued Double J. “That’s always been very hard to do for many, many guys. She wanted the guys to have something when their wrestling days were over. I learned basic simple principles from her that I carry on and will take to my grave just because they’re sound and true. They’re pretty simplistic. If you follow a few simple rules in business, it’s really hard to go wrong.”

TEENY?
Why does Jerry Jarrett refer to his mother as Teeny? We had to ask: “The story goes that my mother’s name was Christine and I began talking very early but had trouble pronouncing some multiple syllables like Christine. Also, remember that these were the days before Dr. Spock and Baby Einstein videos, so adults spoke to children in ‘babyspeak’ or ‘baby talk.’ Baby talk seemed to end everything with ‘e’. Thus, Chris didn’t make it out of my mouth, but the ‘tine’ registered. With the ‘e’ added, as I supposedly did with all my words, it became ‘tine…e.’ In time, my mind developed and as I learned to write. It seems I changed the spelling to Teeny.”