Scott Steiner: On conquests and conquering 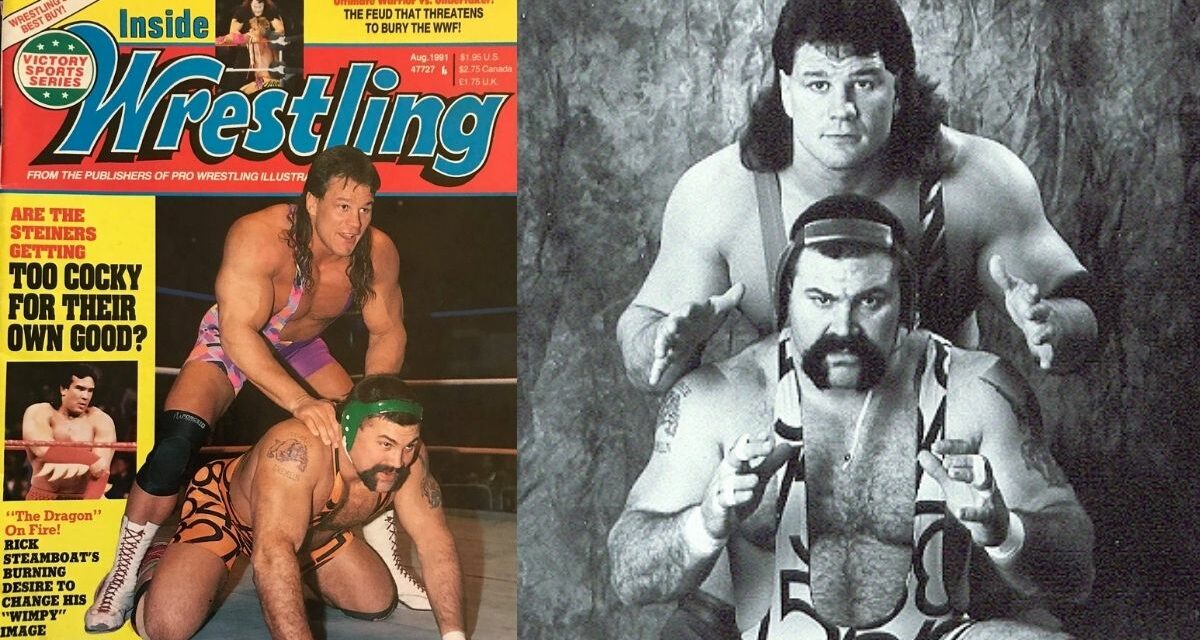 He’s Big Poppa Pump, the man with the largest arms in pro wrestling, and an ego to match. He’s got a big match at Sunday’s TNA Lockdown pay-per-view. He’s Scott Steiner, and he’s got a lot to say. And Triple H won’t like it. 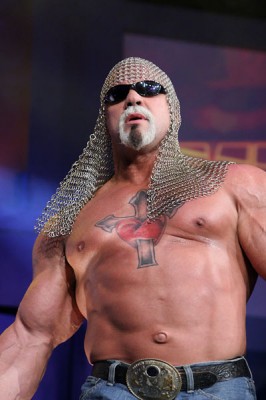 Taking the time to talk with journalists (and various other hangers-on) on Wednesday for a TNA/Spike TV conference call seemed like a mild annoyance for Steiner. Besides a hardcore workout schedule to keep his massive frame pumped to its peak, he’s been living life to the max, and claims to have set a new world mark for conquests.

“About six years ago, I broke Wilt Chamberlain’s record of 20,000 women,” bragged Steiner. “The number’s growing higher, and that’s what I plan on doing for the rest of my life – pleasing my freaks.”

He’s content with the simple schedule working for TNA, mainly TV tapings and pay-per-views. It gives him more time for what’s important to him. “In my life, women are the greatest thing ever put on this earth. I’ve always loved women. When I was away, I just spent more time loving women,” Steiner said.

At the end of WCW’s run as a promotion in 2001, Steiner was one of the main men on the roster. Yet he wasn’t 100% physically and knew it. He had nerve damage in his foot, suffering what is commonly called drop foot. He wouldn’t get it fixed until late 2003, after his big run in WWE came to a stumbling halt.

Doctors put six screws into his foot, did a tendon transfer, and did a bone graph from his hip. “It was pretty extensive,” he said.

An obsessive trainer, he worked out throughout the five months he had the cast on his foot. Everything’s cool now. Just ask him. “I’m fine right now. Just look and see me on TV, I look as great as I’ve ever looked. Injuries are a part of sport. I’ve pretty much injured every body part that you can.”

The time away from the ring was good for him, besides the women, of course. “I missed it. It gave me a lot of time to think,” Steiner recalled. “I’m glad I’m still able to wrestle. Even though I’ve had a lot of injuries, I’ve had a long career. I’m glad I can still do it.”

It also gave him a chance to mull over the many things that went wrong during his WWE stint. “I was pretty much done after WCW, then WWE offered me actually more money than I was asking for, so it was hard to turn down.”

Though he claimed not to have any positive memories of his recent run there, Steiner did have some kind words for his former valet.

“Stacy Kiebler has the nicest legs in professional wrestling, and pretty much the whole world. When I walked out to the ring with her, and she bent down through the ropes, it was the best place in the house,” he said. “It was awesome. I always got along with Stacy.”

The same cannot be said for Triple H, whom he battled for the WWE title on two pay-per-views.

Steiner said, plain and simple, that he was held back by Triple H – and that he wasn’t alone.

“Yeah, well, look what happened to everybody else. Same thing Goldberg, same thing Kevin Nash. What can you do? The guy’s a very insecure man. Realistically speaking, if he wasn’t banging the boss’s daughter, he wouldn’t have a job there right now.”

Frustrations with the WWE writing crew still seem to eat at him. “Guys can’t even wrestle in the ring now. When I was up in WWE, they couldn’t understand why I would do push-ups in the ring. I went what? I don’t f***ing understand The Spirit Squad. You know what I mean? Give me a break. Or pushing a retard? Come on! And you don’t understand push-ups? Come on!”

It was only a few weeks ago that Big Poppa Pump made his return to pro wrestling, coming to the aid of his old friend Jeff Jarrett in the “King of the Mountain’s” battles with Sting.

The locker room in TNA was not the same as what he experienced in WWE. “What I’ve noticed is that the atmosphere is a lot different. In WWE, Vince [McMahon] surrounded himself with a bunch of yes-men. When I left there, it was brutal, and it got worse backstage than it ever had.”

His relationship with Jarrett goes back a long way. Steiner had survived Dick the Bruiser’s WWA territory around Indianapolis, and his next stint was in Tennessee. Having both been nWo members, in the dying days of WCW, Jarrett was seen as hired muscle to protect the champion Steiner. The roles are virtually reversed in TNA, even if Jarrett is beltless at the moment.

Why TNA and why now? “It was timing. Jeff called me up, wanted me to take care of Sting. I’ve had issues with Sting in the past. I definitely jumped at the opportunity,” Steiner said, in full hype mode for the match Sunday that pits Jarrett, Steiner and America’s Most Wanted against Sting, A.J. Styles, Rhino and Ron Killings. “All these fans are behind Sting. They want him to come over and take over TNA. They’re going to find out it’s not going to be so easy … Sting’s no competition to Big Poppa Pump. I’ve got the largest arms in the world. How’s he going to contend with that?”

It’s tunnel-vision for Big Poppa Pump. He wants to lay a beating on Sting. “My mindset is on Sting. I’ve watched what TNA has been doing and they’ve been messing with Jeff. Everybody rolls out the red carpet for Sting like he’s — he’s the champion of the rednecks and white trash. I’m going to put him in his place. His fans will be hoping that he’ll make a miraculous comeback when I beat him down. It’s not going to happen.”

The TNA six-sided ring and the steel cage are also on Steiner’s mind. “I think it’s an innovative concept, I think it’s pretty cool. It’s definitely going to be different when I step in there. We’ll see what happens,” he said. “I’m just planning on grounding and pounding anyway. I don’t plan on hitting the ropes or anything like that. Sting might not even make it to the ring. I might beat him up in the locker room. That octagon ain’t going to be nothing. I don’t know, we’ll see what happens. But it’ll definitely be different than four corners.”