Mat Matters: Sting still has something to offer

If you had returned from a five-year stint on a desert island just in time to catch last week’s Thursday night debut of TNA Impact on Spike TV, you would have seen a few familiar faces.

Certainly, Jeff Jarrett, Christian Cage and Team 3-D would all have been instantly recognizable. There would have been no mistaking Scott Steiner, still as insanely pumped up as ever. If you were a fan of ECW back in the day, you would have known the ex-Rookie Monster, Rhino, for sure. Still, the build up throughout the entire program was for the most well known wrestler on the show, the one who hadn’t been on national TV the whole time you were on the island: the man called Sting.

It’s amazing to me to think that it has, indeed, been five years since Steve Borden took on Ric Flair “for old times’ sake” on the final edition of WCW Monday Nitro. As the Nitro reporter for this site at the time, two thoughts came to mind. The first was hoping I wasn’t out of a job. The second, and more significant, was wondering whether or not that was the last time we’d see both men on the air. While the Nature Boy quickly put those kind of thoughts to rest for himself, it wasn’t until this January when TNA announced they had signed him to a one-year deal that we knew the Stinger would be doing the same. 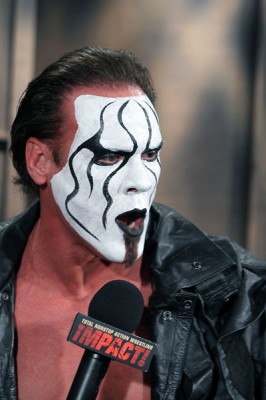 For TNA, the signing made perfect sense. The promotion has had a pretty decent track record of importing talent — like the aforementioned Cage, currently the TNA champion — to supplement home grown-stars like A.J. Styles, but none have the reputation and track record of Sting. You could argue that, with the exception of The Rock, there isn’t a more recognizable performer TNA could have brought into the fold.

It also seemed like a good marriage for the man himself. Sting admitted during interviews a few months ago that he had spoken to Vince McMahon about finally joining the WWE, but the schedule was just too grueling for a man on the far side of age 45. He also had his doubts about reconciling his religious beliefs with the WWE’s sometimes questionable storylines, and he probably feels justified in the wake of the current inclusion of God as Shawn Michaels’ tag team partner at Backlash. As Borden himself explained, the focus in TNA is on the in-ring action, and that’s just the way he wants it.

With that in mind, the early returns are good. Sting’s match with “Showtime” Eric Young wasn’t the in-ring highlight of the night by any means — that was the X-Division title match between Samoa Joe and Christopher Daniels — but even looking maybe a half-step slow, he didn’t look out of place in the promotion’s six-sided ring. The fans popped for his trademark spots and he even hurled himself over the top rope to the floor with a plancha. All around it was solid if not spectacular.

The same could be said for his microphone work. Sting has never been on the level of a Flair or Michaels when it came to cutting promos, and his taunts at the end of the show (calling Jarrett and his teammates children that needed to run home to their moms) seemed, like his “Crow” gimmick, just a tad dated. But just like in the past, he made up in enthusiasm what he lacked in content. By the end of the show, when Sting’s partners for the upcoming Lockdown pay-per-view were revealed, I was more interested in seeing the show than I was at the beginning of the night. The poll on the TNA website suggested that a number of fans felt the same way, and the promotion can’t ask for anything more than that.

Another theme that came up during his January press conference was that Sting felt he had nothing left to prove in the ring, and that is 100 percent true. Unlike more traditional athletes, there’s little risk of a wrestler tarnishing his legacy by performing when he’s past his prime, so Sting really has little to lose by making one final run in 2006, if that is indeed what he’s planning. It would be somewhat fitting, given his long history with the NWA and WCW, if he got one final run with the NWA world title, but he certainly doesn’t need it.

It’s always difficult to define that quality that separates the top stars of professional wrestling from their brethren, that “it” factor that they need to set themselves apart. Whatever it is, Sting has always had it, and that fact alone should make his TNA run a win-win situation.

Other quick thoughts for this week:

– Every time I take a shot at the WWE brand split in this space, like I did at the very end of my last column, it always stirs up e-mail from dissenting readers. The split itself wouldn’t be so bad if Smackdown wasn’t clearly getting the short end of the creative stick. It always seems like there are only a few wrestlers on the show at any given time capable of holding down spots at the top of the card, a situation made worse at the current time by Batista’s injury and Randy Orton’s suspension. Noteworthy storylines and debuts almost always take place on Raw, while the Friday night show gets things like a towering, unknown giant showing up to take on The Undertaker. Ugh. If it appeared an equal effort was going into both shows, my opinion would be somewhat different.

– Tim Baines’ column for the Ottawa Sun mentions that the 2007 Survivor Series is set for Montreal, ten years after the infamous Bret Hart incident that has been brought up ad nauseum ever since. Maybe fans in Montreal disagree — and let me know if you do — but I think I speak for a large portion of fans elsewhere when I say, “can’t… take… any… more.” Yes, it’s an important, if unpleasant piece of wrestling history, and maybe the best example ever of how backstage politics can turn ugly. But the WWE needs to focus on the future, not continue to live in the past, and you can just imagine what they might have planned for next year.