CHICAGO — The surprising thing about the WWE Hall of Fame inductions wasn’t that Bret “The Hitman” Hart was among the inductees — and that he showed up — but that the whole show was so sincere.

In a day when commercialism runs rampant (and not just in the Fed), and the names of dead stars from the past are used for cheap heel heat, the displays of emotion, thankfulness and appreciation shown Saturday night at the Rosemont Theater in suburban Chicago at the Hall of Fame ceremony was downright moving. 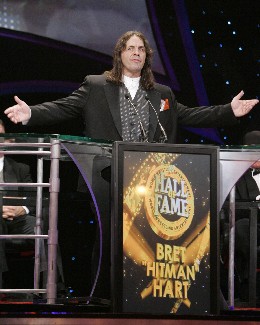 Nothing could possibly top the posthumous induction of Eddie Guerrero, of course.

“I think we all thought Eddie Guerrero was going to be inducted into the WWE Hall of Fame one day,” said Rey Mysterio on the podium. “We just didn’t think it would be so soon.”

Guerrero, who died in November 2005, was inducted by Mysterio, his nephew Chavo Jr. (who thanked Eddie for teaching him it’s okay to cry and “his infectious smile, his infectious laughter), and Chris Benoit, who admitted to being, along with Dean Malenko, one of Eddie’s “road wives.”

“We always made sure everything was alright, that we were all comfortable. We were always fighting and bitching, whining, complaining,” explained Benoit, his voice quivering. “Spending each other’s money, lie, cheat and steal. One thing beyond a doubt though, Eddie Guerrero, when he stepped through the ropes into the ring, he was king, he was the boss, he was the man, he was the engine. He proved that to me every time I stepped into the ring with him.”

Eddie’s widow Vickie accepted the honour, along with their two daughters together. She especially thanked the fans — in between chants of “Eddie” — for their outpouring of love, and support of the Guerrero family. Among those in attendance were Eddie’s mother and his three wrestling brothers, Chavo Sr., Hector (whom Gene Okerlund outed as the infamous Gobbley Gooker in his speech), and Mando.

For the most part, the other inductees were thrilled by their moment in the spotlight.

Though it was a night headlined by Hart and Guerrero, it was most definitely “Sensational” Sherri Martel who stole the show with a brassy, overjoyed ode to life when her turn came on the lectern. In short, she showed more personality in 10 minutes than the recent crop of “divas” has shown all year.

Brought to the stage by “The Million Dollar Man” Ted DiBiase, who threw money to the crowd of wrestlers and guests in the front rows (“JBL, follow that,” he challenged), Martel proved her toughness, and her love of the business.

When a member far in the back of the sold-out Rosemont Theater interrupted her the first time, Sherri threatened, “That’s it, the nice girl stops here”, and followed through. “I worked 26 years for this, so sit down and be quiet!”

Martel shared tales that verged into bawdiness: Ric Flair having the confidence to place $100 on her pool game — which she lost; how she almost got paired with Ron Simmons in WCW to capitalize on the O.J. Simpson murder trial, but ended up with TWO big, African-American men in Harlem Heat instead; her troubled marriages: “The promoters gave me longer partners than I could pick for myself,” she quipped, praising Pat Patterson for being able to keep a relationship going for so long; and working with Randy “Macho Man Savage: “Now that was psycho, and you know you had to have a psycho to work with him.”

It was a sincere, funny and very off-center.

The others on the show may not have measured up to the high bar set by Martel, but their appreciation of the WWE’s honour was evident nonetheless.

Starting off the evening were The Blackjacks — Blackjack Jack Lanza and Blackjack Mulligan (Bob Windham), who were introduced by Bobby “The Brain” Heenan.

“We did it our way,” proclaimed Lanza, who told a few jokes that didn’t quite click, and rambled a bit. Mulligan was a little more direct when his turn at the microphone came, fitting for one of the world’s best interviews. “I promised to go quietly, but to hell with that,” he started, before getting into his trademark, rhythmic patter. “Every Saturday, between the Road Runner and the Cisco Kid, there was the Blackjacks.”

A proud Mulligan reminded the current crop of WWE stars and guests in the front section of the theater of the importance of legends. “We’ve been putting guys in the seats for a long time,” he said. “When you hear about the good old days, you’re looking at it.”

Up next came Greg Gagne to sing the accolades of his father. While the WWE video that preceded the Gagnes was woefully incomplete (no mention of Mad Dog Vachon or Hans Schmidt, to name two glaring omissions), both Gagnes made a few cracks about the irony of being inducted into a Hall of Fame run by Vince McMahon , the man who put their company, the American Wrestling Association, out of business.

“Verne Gagne, WWE Hall of Famer,” mused Greg Gagne. “Twenty years ago if you said that I would have said that you were out of your mind.”

As for McMahon, Gagne admitted, “I never did like the guy either,” smiling and asking, “Is he around yet?”

“Watch your back,” said his son.

In the end, the 10-time AWA World champion said, “I couldn’t have made a better selection than becoming a professional wrestler.”

The induction of William “The Refrigerator” Perry into the Celebrity Wing of the WWE Hall of Fame was done by John Cena, who got by far the most negative reaction of any of the WWE superstars in attendance. Smiling through the resounding boos, Cena smiled and deadpanned, “It seems as if everybody is ready for WrestleMania 22,” while looking at his main event opponent, Triple H, in the first row. When Triple H stood, and the crowd started chanting for him, Cena said, “It’s good to see Triple H’s family is in the crowd.”

To introduce Perry, Cena dropped into a pretty good impression of a Howard Cosell-type voice to recap The Fridge’s exploits on the field and the single time he was in a pro wrestling ring for WrestleMania 2 in Chicago.

After the overwhelming zaniness of Martel’s speech, S.D. Jones came out to calm things down while talking about the next inductee, his friend Tony Atlas. Jones told a few tales of traveling with Atlas and his weightlifting feats. Atlas silenced the rowdy crowd with tales of growing up dirt poor in Virginia, and introducing the woman who helped him get himself on his feet again after being homeless as a part of his acceptance speech.

Okerlund, along with Hart and Guerrero, was a part of the portion of the broadcast shown on the USA Network. The switch from the live show, aired on WWE.com, to the TV version, was a bit awkward, but Okerlund’s Number One supporter Hulk Hogan stepped into the breach with ease and brought the crowd up onto its feet again. “Mean Gene became the voice of professional wrestling,” Hogan said, explaining how he and Gene hit it off so well and hit more than a few bars together as well.

After an impromptu kiss from Heenan on his bald skull, Okerlund told a few tales, especially thanked Hogan and the Gagnes. “I’m going to do it for another 35 years, if at all possible,” he promised.

The final inductee of the evening, Bret Hart, had a tough act to follow in Eddie Guerrero’s friends and family. Fortunately, he had the one and only “Stone Cold” Steve Austin to introduce him.

Coming out to one of the biggest pops of the night, Austin smiled at the loud “Hogan-Austin” chant, a demand for an often-rumoured match-up. “I found a can of whoop ass, and it had Hulk Hogan’s name on it,” said Austin, before launching into a story about how his Wrestlemania 13 bout with Hart at the Rosemont Horizon was the best match he ever had in pro wrestling. Calling Hart a master storyteller in the ring, Austin praised Hart’s work ethic, while knocking his constant lateness.

The Hitman proved to be a great storyteller on stage as well, even if the pro-Hart crowd sometimes drowned out what he was saying. He shared tales of Jim “The Anvil” Neidhart, his brother Owen and father Stu, and much more.

“No one is more surprised than I am to be here today,” admitted Hart, who has had a long-standing feud with the WWE since the 1997 Survivor Series when the WWF title was taken from him.

Hart was somewhat muted in his enthusiasm for the honour, and noticeably did not hug others on stage as his predecessors had.

In the end, all the members of the Class of 2006 stood to be recognized as confetti floated into the crowd.