CHICAGO — It was a tough night for the champions at WrestleMania 22 Sunday night — only three of five walked out with their title belts. And the big one who did retain — John Cena — didn’t keep all his fans.

In the main event at the sold-out Allstate Arena in Rosemont, Ill., WWE champion Cena somehow overcame Triple H to retain his WWE championship, but in the process, making the former 10-time champ tap out. It was a hard-fought, see-saw battle that saw the fans torn over their allegiances, chanting for each at different times. Youngsters and women in the crowd cheered Cena, while the louder, larger male portion of the fans booed him. 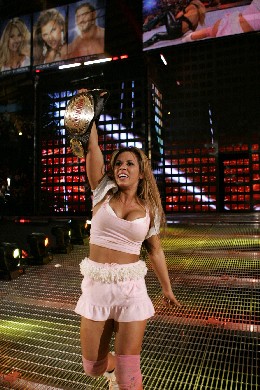 In the Smackdown main event, Kurt Angle couldn’t hold on to his World title, with Rey Mysterio coming out on top in an emotional roller coaster of a three-way match, where he pinned Randy Orton. The 5-foot-5 Mysterio dedicated the victory to the memory of his late friend Eddie Guerrero, who died suddenly in November.

Canada’s own Trish Stratus lost her Women’s title to Mickie James, and judging by the crowd’s reaction, Stratus may have also lost their support as well to the maniacal James.

The hated Texan JBL toppled Edmonton’s Chris Benoit for the U.S. championship, holding on to the ropes for an upset after rolling over while cinched in Benoit’s Crippler Crossface move.

The other champions to emerge unscathed were the Raw tag champions, Kane and Big Show, who handled Carlito and Chris Masters with relative ease in the show’s opener.

In the most exciting match of the evening, full of death-defying stunts and hard-hitting action, fan favourite Rob Van Dam won a six-way ladder match that guaranteed him a world title shot within the next year. Others in the match were Ric Flair, Shelton Benjamin, Fit Finlay, Matt Hardy and Bobby Lashley.

For the fans of mayhem and violence, there was Edge against Mike Foley in a bloody hardcore match. With no rules to speak of, the two traded shots with a baseball bat wrapped in barbed wire, chairs, cookie sheets, thumbtacks, and, in the end, a flaming table, which Edge speared Foley through for the win.

Other results: The Undertaker beat Mark Henry in a casket match; The Boogeyman beat Booker T and Sharmell; Torrie Wilson beat Candice Michelle in a Playboy Pillow Fight; and Shawn Michaels beat WWE owner Vince McMahon in a No Holds Barred match that featured blood and the stunt of the night — Michaels leaping from a high ladder onto a prone McMahon on a table, his head covered with a garbage pail. Before WrestleMania began airing live on pay-per-view, Viscera won an 18-man interpromotional battle royal.

And for those who plan ahead, WrestleMania 23 was announced for Sunday, April 1, 2007 in Detroit at Ford Field.